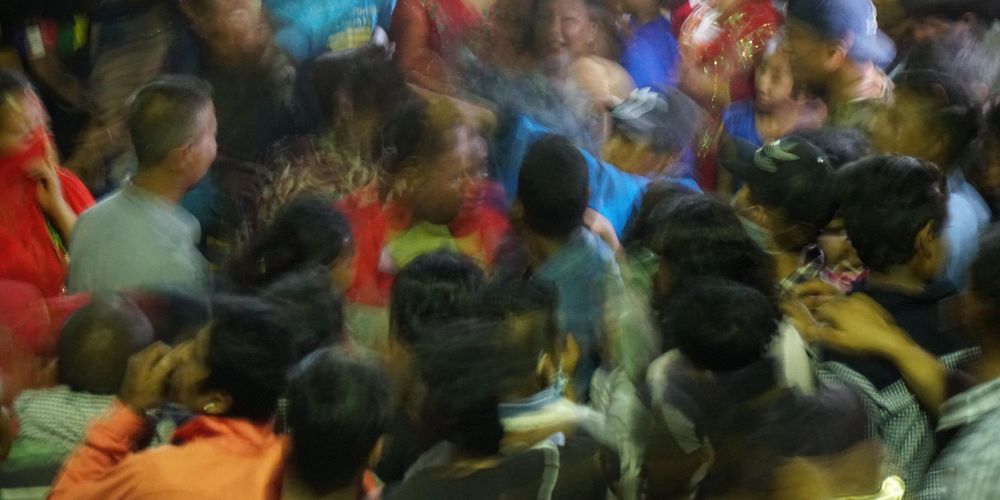 “Pheri Teej Aayo Baba” is a 2018 Teej song by Komal Oli, featuring the Swabhiman Mahila Samuha in Bansghari, Bardiya. Komal and the women of Bansghari dance and sing about social problems, first enumerating them, then suggesting potential solutions. At the end of the song, the lyrics exhort, “Let’s all dance on Teej, and work cooperatively together.” Such a message of dancing as a metaphor for women’s creative desires and solidarity runs through two decades of Komal’s Teej songs.

Teej has become what is called a “dense signifier”, in semiotic terms: more than just a tithi observed on the Hindu calendar, it is a touchstone for discussions about cultural change that highlights the deeply-felt, fraught politics of female bodies and voices in public space. Understandably, many feminists call for abolishing this holiday that asks women to fast for their husbands’ well-being, along with the even-more-anti-woman Rishi Panchami, the day after Teej on which Hindu women are supposed to purify themselves from the so-called “defilement” of menstruation.  There are also calls to re-imagine Teej in a more feminist way, highlighting how women are already using it to celebrate their strength.

When I was first introduced to Teej nearly twenty years ago as a young folk music researcher, women in Kathmandu presented it to me as a holiday about sisterhood. I was invited to a dar khaane party, a pre-fast feasting event with speeches, of whose content I remember nothing. A few women read their poetry. Everyone was wearing red saris, I was gifted beads, earrings, and bangles, and we ate, and danced. It all seemed very apolitical, focused on fun above all.

Later I read the anthropological scholarship (this article by Laura Ahearn has a good bibliography) and realized that this group’s focus on women’s public self-expression was part of the politics of Teej. I learned that for certain Hindu groups—indeed, for Nepal’s dominant cultures—women’s public singing and dancing was considered unsuitable, as was anything that drew attention to one’s female body in public. The exceptions are occasions like Teej, or weddings, that, by socially sanctioning such behavior, but in ritual contexts, put boundaries around the perceived sexual excess of women publicly drawing attention to their bodies. This is not the case for everyone, as many non-Hindu women face far fewer prohibitions against public performance. And of course, people defy these social norms all the time. But that doesn’t mean they have been forgotten. The women who introduced me to Teej were celebrating it in a way that celebrated their creativity, as women whose words mattered in their poetry and speeches, and whose bodies mattered as they reveled in moving them, dancing all together.

Were Teej songs that highlighted women’s pain, or celebrated women’s solidarity, simply tokenized with one holiday season’s attention, after which everything would return to the same old patriarchal norms?

I began paying attention to the words of Teej songs. I learned about their themes of women’s suffering: missing their natal homes, having to bear in-laws’ unjust demands, feeling torn between upholding family honor and personal desires for freedom. I learned how women in the 1980s had begun to sing and publish booklets of Teej songs calling for women’s liberation in a more politically-oriented way.

In these lyrics-focused discussions, I learned of debates about how songs should be, in order to actually create change: among progressive writers of Teej songs, those that wallowed in suffering to the point of hopelessness were out, while those that set forth programs for change were in. These debates paralleled those regarding the efficacy of performance for social change the world over. Further debates raised the questions: how much change could these Teej songs bring, as long as they were constrained by Teej itself? Were Teej songs that highlighted women’s pain, or celebrated women’s solidarity, simply tokenized with one holiday season’s attention, after which everything would return to the same old patriarchal norms? And should we be focusing on the words and their meanings so much, or should we really look at Teej as a whole event?

In 2006, Komal Oli released Poila Jaana Paam (“May I Elope” or “Let Me Elope”). Komal was already somewhat notorious, as a single woman who had chosen a life as a performer over a life of marriage and motherhood. The song, with lyrics by Dandapani Pande, was at first glance fully in keeping with Teej traditions: worshipping and fasting, and asking Lord Shiva for a good husband. But the word poila caused an uproar due to its multiple meanings. The phrase “poila jaana paam” could have meant simply “let me get married,” which is what Dandapani Pande says he intended. But poila had different meanings to different people. Was she advocating leaving one’s husband, as “going poila” meant to many people in Eastern Nepal? Did she mean women should run away and elope without family permission, as the term implied in areas further to the west? Either way, what was she doing praying for anything less than the kind of marriage that would bring honor to her family?

Protestors’ questions overlooked the fact that Dandapani Pande wrote the lyrics, and attributed them to the true feelings of Komal the singer. They collapsed the idea of a persona in the song with the singer herself, leading to personal attacks on Komal’s character. Komal and the persona in the song appeared to have an excess of desire and agency -- the capacity to act independently and make choices -- that was deemed inappropriate for an honorable woman, and thus too much for the song’s detractors to bear. The protests also suggested that people took seriously the potential for songs to bring about social change, whether or not they thought that change was desirable. 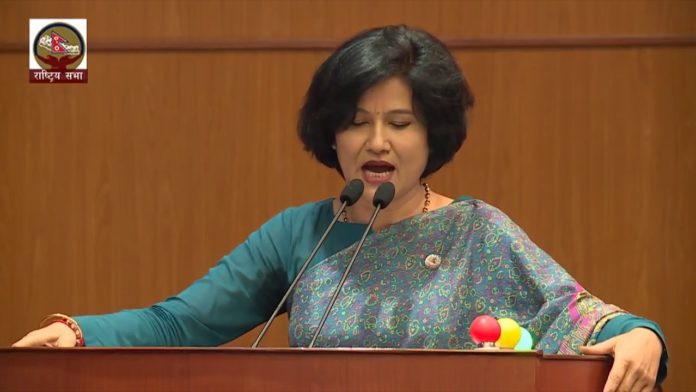 It is of course unclear whether the song ever influenced anyone to “go poila”. But it did contribute to discussions of women’s publicly expressed, embodied desires. Komal kept the conversation going for over a decade, in live shows and in newer songs. In 2016, one of Komal’s Teej songs was a dohori song, Lastai Choti Ho, written by Pashupati Sharma, referring back to Poila Jaana Paam with the lyrics “this is the last time I’ll sing to request a husband.” Alluding to her upcoming run for political office, Pashupati’s lyrics suggest that she should forget marriage and become a politician instead. This is indeed what she has done, not without controversy, but without ceasing to perform. In 2017, she and Pashupati released another song, Chahiena Poi, in which she sings, “I don’t need a husband…now I’ll live for the nation; now I’ll dance for this.”

Read also: Bunu Dhungana is fed up with patriarchal culture

If the Poila Jaana Paam controversy focused on how Komal as an individual pushed the boundaries of acceptability for women, she has continued to push the boundaries of acceptable behavior for women as a collective in her Teej songs by celebrating dance. In fact, the majority of her Teej songs—along with many other Teej songs—are about dancing. Teej, in these songs, is a chance for women to experience creativity, camaraderie, and cooperation through dancing together. Komal invites her family and friends to dance in her music videos, so these videos themselves become like Teej parties, whether set at a temple, at home, or even at a disco.

My personal favorite, for its inclusiveness and subtlety, is her Teej song from 2009: Aau Na Aau, Sangini (in which I also danced). Featuring the voices of women and girls ages ten to perhaps seventy in repetitions of the title lyric, the song celebrates all women’s desires for self-expression, as represented here by song and dance. Only lightly choreographed, the video highlights all kinds of female dancing bodies, young and old, moving joyously together. 2018’s Aau Didi Baini Ho, and 2019’s Chhadke Tilahari, both sung with her sister Pragya, follow the same theme of dance and sisterhood. These dance-oriented Teej songs take the holiday’s focus off of the “fasting for a husband” narrative, and recontextualize it toward sisterly love (literally, in Komal’s songs with Pragya), intergenerational support among women, and supportive environments where women can experience and express joy through happily moving—rather than downplaying—their bodies in public.

Song words are important, and so is the dancing that the songs inspire. It can be a political act for a woman to simply occupy public space. To do so while joyfully singing and dancing, highlighting the embodied and desiring self, is a creative act of hope. As Komal Oli continues to expand the boundaries of women’s “acceptable” behavior, her Teej songs provide a soundtrack for this expansion. And anyone can dance to them, should they feel so moved.

Anna Stirr  Dr. Anna Stirr is an ethnomusicologist and performer, author of Singing Across Divides: Music and Intimate Politics in Nepal (Oxford, 2017), and Associate Professor of Asian Studies at the University of Hawaii.

Why Nepal loves Rabi Lamichhane – and why some revile him