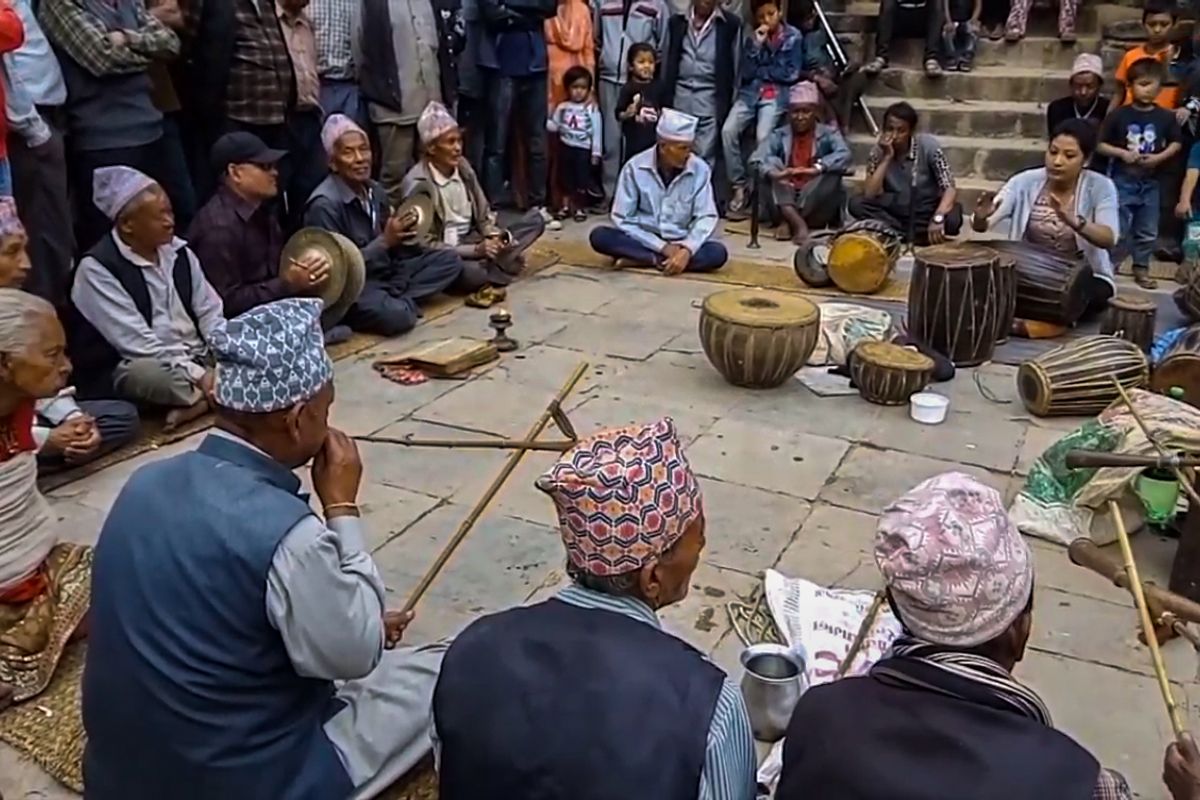 Musicians as young as 12-years-old and as old as 70 sit on opposing sides facing each other while 38-year-old Indira Lachhimasyu takes center stage. Lachhimasyu’s palms masterfully strike the lala khin, a barrel drum, one of several instruments that harmonize to create enchanting devotional music.

Lachhimasyu’s part of the Dattatreya Naudapha Bhajan Khalah, a traditional Newa music ensemble from her hometown of Bhaktapur. The khalah perform the dapha, believed to be the oldest form of bhajan, or devotional music, in Nepal, during jatras and special occasions. lachhimasyu lala khin drum is usually accompanied by eight other percussion instruments — the dhimay, paschima, nyah khin, jwo nagara, damaru, taa, bhusya, and kaynpin. These are accompanied by vocal harmonies and the bansuri, which provides the melody for the dapha.

As an ancient and rigidly codified form of bhajan, dapha was long the province of men, but things are changing and more women have started to take an interest and be included in the dapha khalah.

“I first started learning music at the age of 11. Back then, girls weren’t allowed to play music but my father and grandfather who were dapha music teachers supported me,” said Lachhimasyu, who was also among the first women to play the dhimay and the nau baja.

Since picking up an instrument at such a young age, Lacchimasyu has become something of a master, teaching and promoting traditional Newa music across the world. She’s been on musical tours to Germany, Austria, Italy, Thailand, and India and also teaches dapha music at schools like the Prabhat English School, Everest English School, and various other institutes.

“The dapha tradition was on the verge of being forgotten because people didn’t consider music a useful skill,” said Lacchhimasyu. “But now, the younger generation is keen on learning traditional music.”

Dapha music, according to scholar Richard Widdess’ book Dapha: Sacred Singing in a South Asian city, is an intricate form of devotional music that is based largely around the raga-tala system of South Asian music. While the raga forms the melody, the taal is the meter in which the music is played. Ragas vary according to the time of the day and are composed to evoke certain emotions and moods based on timing. Initially performed in Bhaktapur’s Malla courts, the musical form made its way to the city’s farmers, who now make up the majority of dapha practitioners.

This artform, however, has been on the verge of extinction. A lack of interest among young people, combined with a lack of institutional support, meant that dapha was slowly being lost to the ravages of time. But paramount in the loss of indigeneous practices and cultures has been the cultural hegemony of the state, which has long prioritized certain cultures over others.

According to ethnomusicologist Pushpa Palanchoke, Newa social structures have historically been impacted by “Hindu Brahmanical colonialism”.

“Publications and use of the Newar language remained criminalized till the end of the twentieth century, fueling fears over knowledge and sharing within the language. This pushed local traditions further behind secret doors, such secretiveness, in the long run, became the norm which undervalued the creativity in the text and the music, ” she said at the 2021 Music, Spirituality, and Well Being Conference.

But since the end of the Maoist insurgency and a growing assertion of identity politics by indigeneous groups has led to an awareness of marginalized traditions, leading local governments to promote and preserve them. These artforms are now even being incorporated into school curriculums.

“Local governments decided on a strategic push for tourism year 2020 to promote tourism through local cultural shows in homestays. That helped lead to an awareness of Newa cultures and traditions,” said Palanchoke.

As an example, she points out how Kirtipur has renovated and built communal infrastructure like akkhachen (also called ankhachhen or agamchhen, depending on the region) where dapha musicians perform and train students.

Such infrastructure and institutional support is critical to the longevity of musical traditions, says Palanchoke, as they bring music out of the confines of a select few and allow a broader cross-section of society to participate. Palanchoke has also been working to preserve the dapha through Folk Lok, an organization she founded in association with the non-profit Satori Center for the Arts. They host the ‘Dapha Calling’ forum where discussions are held with dapha practitioners and academics on knowledge production and issues relating to the artform.

“We try to document such intangible heritage and help make these traditions gender, caste, and community inclusive,” said Palanchoke.

These efforts are attracting a younger generation to rediscover their traditions and take part. Like Lachhimasyu, 28-year-old Bipu Shrestha from Lubhu has also been preserving and teaching traditional music in his neighborhood.

“When I first started researching the dapha music scene in my locality, I found out that four out of five of Lubhu’s dapha khalahs had closed down. The one that was still active only plays during festivals, making it a rare sight to behold,” said Shrestha.

“For around seven years now, I have been providing dapha music training to Lubhu youngsters between the ages of 11 and 26 alongside an old guruji who gave me guidance,” said Shrestha. “We have since trained around 45 vocalists, 9 khin baja players, and 25 dha baja players, completely restarting this ancient tradition in Lubhu.”

Shrestha and the Lubhu Mahalaxmi Dapha Khalah have also been making use of the internet to archive traditional compositions and share newer ones on YouTube. Lachhimasyu too uses Facebook and YouTube to upload tutorials on dapha music and archive performances.

“At one point, much of our musical heritage was fading away, but now Project Baja Nepal, Folkmandu society, and others are collecting dapha videos and audio and archiving them,” said Shrestha.

For Shrestha and Lachhimasyu, the Covid-19 pandemic meant that they couldn’t perform in public for over two years. They’ve had to rely on digital mediums to practice, share, and collaborate. But with things slowly normalizing, there is hope that they will be able to perform in person before their community again.

But, for the dapha to survive, says Palanchoke, “it is necessary to build an ecology of economic and creative flow around it.”