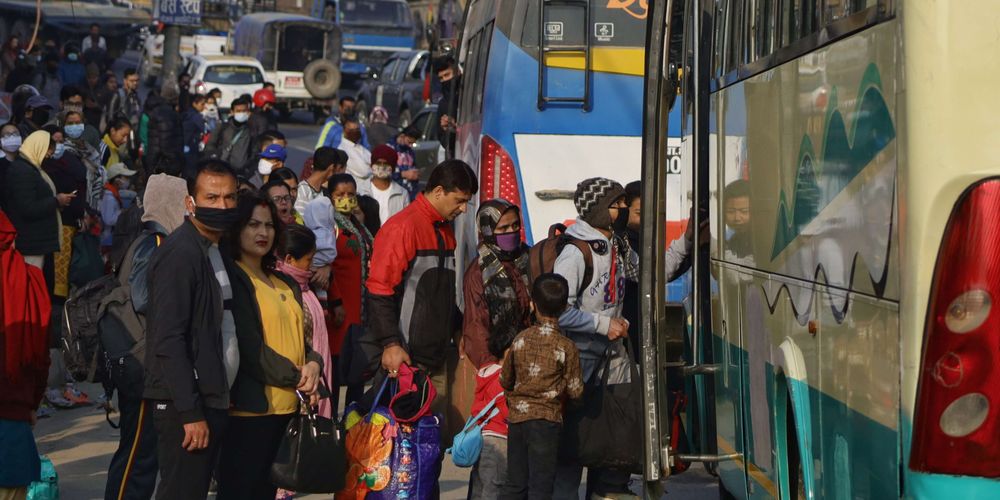 For the past few days, Prakash Shiwakoti’s phone has been ringing endlessly. It starts ringing from the wee hours of the morning till late at night. “I have stopped receiving calls since yesterday. It’s too much,” he said. Shiwakoti is the operator of Saptakoshi Yatayat, a transport company that provides long haul services to passengers travelling from the capital to eastern Nepal via BP highway.

Transport operators like Shiwakoti have faced nothing short of a nightmare handling the flood of passengers looking to flee Kathmandu amid panic and fear over Covid19.

“We hired a few more local minibuses after we fell short of vehicles due to this sudden rise in demand. We have also hired microbuses, and even small vans. Still, hundreds more continue to call. I’ve spent my entire life in the transportation business but I haven’t seen anything like this before. The pressure during Dashain and Tihar is nothing compared to what we have seen in the past few days," said Shiwakoti. 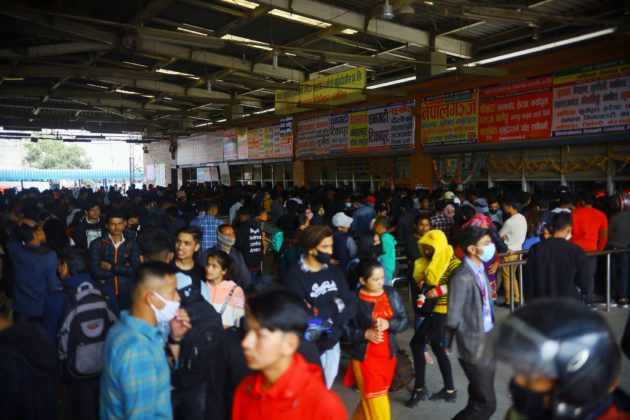 More than an estimated 2 million people are believed to have fled Kathmandu due to fear over Covid19. According to the United Nations, the novel strain of coronavirus has killed more than 14,000 people since the first death was reported in Wuhan, China on 11 January.

The exodus rose sharply after the government decided to restrict all long haul passenger vehicles from plying the roads starting 22 March. “We will suspend our service from tonight as per the government’s decision,” Shiwakoti told the Record on Sunday.

According to authorities, people are leaving Kathmandu from all major routes, including the BP Highway, Kathmandu Kodari Highway, Prithvi Highway, and Tribhuvan Highway.

“Over 206,349 people departed from Kathmandu between 6 pm last evening to 6 am this morning (March 22). More are expected to leave today,” SP Raj Kumar Baidawar of the Metropolitan Police Division Kathmandu told the Record.

Even though the government has instructed everyone to avoid all non-essential travel, this hasn’t placated people’s anxieties. Those who spoke to the Record said they were leaving because of fears they might catch the virus.

“I sent my son back to our village soon after his college shut down thinking he would be safer there. Me, my husband and our daughter are still in Kathmandu due to work. We also plan to leave Kathmandu if things get worse,” said Laxmi Thapa, a local of Panauti who currently lives in Koteshwor.

Many others who are in Kathmandu for educational or medical purposes are also leaving. “There’s news that there’ll be indefinite restrictions. So I thought I’d better leave before I get stranded here,” Bindu Mainali, who left for her home in Nijgadh, told the Record on Sunday.

Thanks to social media sites, rumours and false information have spread far and wide, triggering mass panic. On 21 March, a rumour about how the government was going to spray chemicals to kill the coronavirus across Kathmandu using choppers blazed through the city. Many people are sharing rumours of deaths in Kathmandu due to Covid19 on Tiktok, Facebook and Twitter. Some are claiming with equal vigour that drinking cow urine can cure the virus.

“Yesterday, we arrested a person who was caught spreading unfounded rumours and creating havoc amid the public. We have been searching for others who are engaging in similar activities on social media platforms. Those creating panic by spreading false news and misinformation won’t be spared,” said DSP Hobendra Bogati of Metropolitan Police Range Kathmandu.

While many departees believe leaving the Valley in a hurry will bring them to safety, doctors point out that partaking in such a mass exodus exposes them to greater risks of contracting and transmitting the virus. “It’s extremely risky to go to crowded places like bus parks or to travel in buses. An infected person can easily transmit to others,” said Dr Anup Koirala of Sukraraj Tropical & Infectious Disease Hospital.

Despite the government restriction on public gathering of more than 25 people, bus parks in Gongabu and Kalanki remained crowded throughout the weekend. 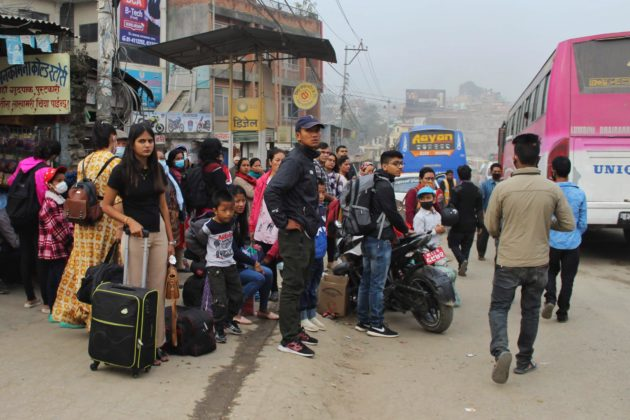 Doctors also say that there is little guarantee that villages are safer. Thousands of people flying in from various countries and through porous borders with India continue to enter without quarantine or checkups. Since last week, more than 2,000 Nepalis, mainly migrant workers returning from various locations with Covid19 outbreaks, were allowed to go home without checkups or quarantine. On Saturday night, immigration took only 67 Silk Air passengers for quarantine while allowing the rest to go home on condition of self-quarantine, according to Hom Nath Thapaliya, chief of TIA Immigration. He said that 919 passengers were allowed to go home on the condition of self-quarantine on 21 March. The government has suspended all international flights, except cargo flights and flights to evacuate tourists stranded in Nepal, effective from midnight on March 22.

“If they are not from the restricted countries, we normally allow them to go home after basic health checkup,” Thapaliya told the Record.

Restricted countries include those in the European Union, UK, West Asia and the Gulf. As of 22 March, a total of 340,000 cases of Covid19 have been confirmed in 177 countries and territories across the globe.

Turkey farmers face off against the pandemic

A few years ago, turkey farming seemed like a lucrative business idea, but with Covid-19 and a general lack of policies, the sector seems to have given out before it could take off.