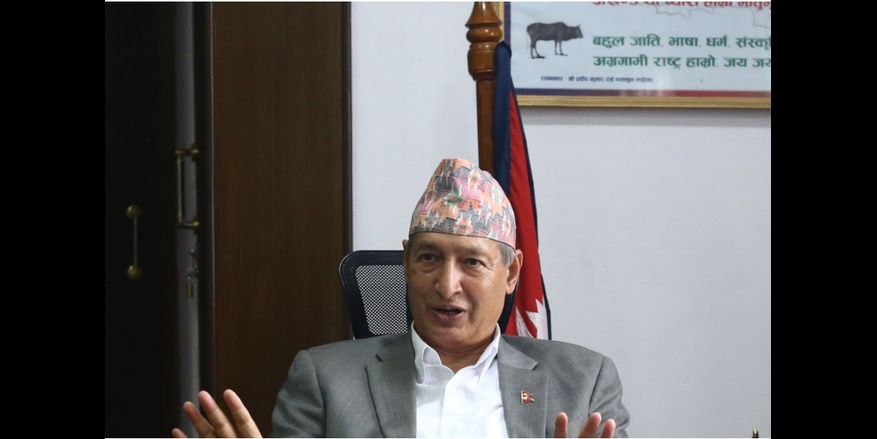 When the then Maoist chief, Pushpa Kamal Dahal, resigned from his position in 2009 amidst a row over the appointment of the army chief, Yuba Raj Khatiwada was working at the United Nations Development Programme’s (UNDP) Regional Centre in Colombo, Sri Lanka. Madhav Kumar Nepal, despite having been defeated in two constituencies during the Constituent Assembly elections of 2008, was readying to take charge of the new coalition government. So Nepal asked his aides to make a phone call to Khatiwada, a retired employee of the Nepal Rastra Bank (NRB), and ask him to return home.

Shortly after Nepal ascended to power, Khatiwada was appointed vice-chairman of the National Planning Commission (NPC), the country’s apex planning body. For Khatiwada, there would be no going back after that--he has held the country’s top government jobs, back-to-back, for the past 11 years.

In the early portion of those years, he remained vice-chairman of the NPC--from June 2009 until March 2010. But even that was not his first stint in power--he had already served as an NPC member from November 2002 to June 2005, through the prime ministerial tenures of Lokendra Bahadur Chand, Surya Bahadur Thapa, and Sher Bahadur Deuba.

In the midst of his second stint at the NPC, the government gave him a more important appointment. In March 2010, Khatiwada was appointed as the NRB’s governor. Knowing that the NRB position was a more influential and lucrative one, he resigned from the NPC to lead the central bank. He remained at the central bank’s helm from 2010 to 2015.

But no sooner had he retired from the central bank than KP Sharma Oli came to power as prime minister. By then, Khatiwada, who had earlier bagged coveted posts by appeasing Madhav Kumar Nepal, had already established his ties with Oli, ties that grew stronger after Oli was elected party chief by defeating Jhala Nath Khanal.

Swayed both by Khatiwada’s overtures and his background in economics, Oli sidelined other economists in the party and picked Khatiwada again to be NPC vice-chairman. Khatiwada’s second stint as NPC chief ended when the Oli government got toppled. But that change of guard didn’t affect Khatiwada at all.

Instead, Khatiwada’s run of fortune continued as Oli subsequently focused on the larger gameplan of merging his party, the Communist Party of Nepal (Unified Marxist Leninist), with the Maoists, led by former guerilla chief Pushpa Kamal Dahal, to form the current Nepal Communist Party (NCP). The merger made Oli one of the most powerful prime ministers in Nepal’s parliamentary history--for the left alliance bagged close to a two-thirds majority in the federal parliament and won the most seats in the provincial and local governments.

With his grip on power ensured, Oli, rather than investing energy in creating pro-people programmes and governing the country better, prioritized the appointing of his cronies, such as Khatiwada. Oli recommended Khatiwada as a member of the Upper House and subsequently named him as finance minister in his Cabinet. Oli had intended to name Khatiwada as an upper-house member for the full term of six years. But that’s when Khatiwada’s lucky run hit a minor snag.

As per constitutional provisions, the parliament secretariat had to use the lottery method to determine the terms of upper house members, and Khatiwada picked a two-year term. The terms of 19 upper house members, including Khatiwada, had expired in March. Yet, Oli sought to continue him as finance minister, by deploying a constitutional provision that allows non-parliamentarians to lead a ministry for six months.

But around then, the infighting within the NCP--regarding Oli’s monopoly in government--had reached a boiling point. That state of affairs forced Oli to backtrack from his plan. To bolster his position within the party, the Oli administration recommended that Bam Dev Gautam--who had become an important player within the party--be nominated to the upper house, instead of Khatiwada.

This forced Khatiwada to step down from his post of finance minister. But, as had been widely predicted, Oli didn’t let Khatiwada remain jobless. In a matter of 10 days after his resignation, Khatiwada was handed a new position of responsibility within the Oli administration--that of special economic advisor to the prime minister.

The appointment flies in the face of the rhetoric Oli had used to rise to power. He had become PM by banking on populist rhetoric, as part of which he’d promised, among others, that he would show zero tolerance for corruption and nepotism. But his latest tenure as PM has been marked mostly by favouritism, nepotism, and a culture of subservience. Many pundits and observers say that PM Oli’s blatant display of nepotism and favouritism is fueled by his autocratic bent. His very own party comrades have been accusing him of appointing cadres loyal to him, mainly those from Jhapa--his constituency--instead of ensuring equal responsibilities among competent party leaders and cadres.

At a recent standing-committee meeting, Oli himself had finally admitted to some of his lapses in appointing party leaders to various high-level posts and had assured everyone that he would not repeat the same mistakes. But he followed that up by appointing Khatiwada as special economic advisor, even though another economic advisor, Lal Shankar Ghimire, has already been working in his administration.

When offering a counter argument, Oli’s supporters say no one is as well versed in economics as Khatiwada is and that’s why he is always the first choice of party leaders. However, throughout his tenure, say his detractors, Khatiwada could not perform to the mark as finance minister. He does not have a single notable achievement for which he will be remembered, the say--except that of being Oli’s yesman.

But some experts do credit him with upholding fiscal discipline, by avoiding populist and bloated budgets during his tenure, something he had pledged in a white paper he had presented after assuming office. Some also give him credit for introducing programmes and policies friendly to the private sector, for easing foreign direct investment, and for controlling revenue leakage. Furthermore, they say,  it is important to note that Khatiwada took office at a time when the country was still reeling under the devastating impacts of the 2015 earthquakes and that he had to manage the financial crisis caused by the pandemic.

But other experts think his tenure was hardly any different from that of his predecessors, or even worse--due to the lack of any ambitious plan and policies to revive an ailing economy tattered by a decade of war and later by a decade of political transition. He was neither able to introduce large-scale programmes to increase employment nor boost small enterprises. They also appear skeptical about his role in upholding fiscal discipline, especially regarding his failure to stop the misuse of the MP fund. He also courted controversies by imposing a levy on imported books,  while deducting the duty on imported chocolates. And he has also been panned by green-economy enthusiasts for increasing the tax on the import of electric vehicles.

Given the schism in opinion regarding Khatiwada’s track record, why hasn’t the NCP pitched other candidates for the roles he has been given? It’s not that the party suffers from a paucity of economists. It’s more that PM Oli never wants to give the others a chance. For instance, Surendra Pandey, who had briefly worked as finance minister, had handled the finance ministry better than previous finance ministers. Others in the party, including noted economist Dilli Raj Khanal, former NRB governor Dipendra Bahadur Chhetri, and Bijaya Kumar Poudel, among others, too are qualified to advise the prime minister. That leaves only one plausible reason for Oli’s sticking with Khatiwada: Oli needed to consolidate power, and for that, he needed someone like Khatiwada, who professes loyalty to him.

Building such alliances is Khatiwada’s forte. A perusal of Khatiwada’s appointment records shows that he was appointed to various powerful positions seven times—back to back—despite his never being elected by the people in the last 15 years. Many in the party compare Khatiwada to Upendra Koirala, who is infamous among the public for getting political appointments on the strength of his political ties with his in-law, Ishwor Pokhrel, and other top leaders.

Such acts of favouritism have been rankling quite a few within the NCP. “Giving opportunities to the same person all the time is a bad decision,” said NCP leader Thakur Gaire. “Appointments should be made on the basis of the results a candidate has delivered in the past.”

But Khatiwada’s appointments, including his most recent one, have nothing to do with his performance, say some observers. By appointing Khatiwada as economic advisor, PM Oli has secured his grip across the ministries. Khatiwada’s appointment has only bolstered the power of the prime minister further. Following Khatiwada’s resignation as finance minister, Oli has kept the vacated ministerial berth to himself. That ultimately means Khatiwada will not just advise the prime minister, but that he remains the de facto finance minister.

After Years of Media Trial, a Stunning Verdict in the Tikapur Case