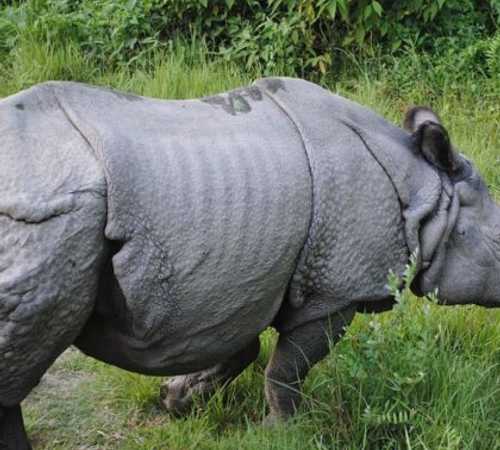 Despite Chitwan National Park’s ample grassland, muddy swamps, hot and humid climate, and a robust river ecosystem, the UNESCO world heritage site is gradually turning into a deathbed for one of the most endangered mammal species in the world—the one-horned rhinoceros.

Rhinos in the wild are numbered at around just 3,500 throughout the world. Yet, in the fiscal year 2016-17, Nepal saw the deaths of at least 150 rhinos with new corpses coming to the surface every once in a while. Nobody has been able to pinpoint the cause of these deaths, although experts point to a range of factors including natural deaths to flash floods to poisoning to poaching and environmental degradation.

We may soon be able to gain some insight into the alarmingly high death count of this critically endangered mammal as stakeholders prepare an investigation into the matter, according to Ananath Baral, chief warden of the national park.

The research is, however, on hold due to the pandemic and it is unclear when it will likely begin or what specifically the experts will set out to do, but according to sources, all possible suspects involved will be investigated.

The possible suspects for the deaths vary depending on whom you talk to. Many experts believe that massive floods that hit the national park in recent years could be the main reason for deaths. The flood of 2017 not only washed away dozens of rhinos to India, but also adversely affected the health of hundreds of other animals.

“If you look closely at the data, you can see an unusual rise in the death of rhinos after the 2017 flood. It could be that the rhinos died during the flood, but the forest rangers found their corpses much later and are still finding it,” said Naresh Subedi, a rhino expert.

Some experts also suspect that pesticides and chemical fertilisers may have played a role in instigating the death of the rhinos. The theory doesn't seem far-fetched as many rhinos enter human settlements to eat food crops like oat, mustard, barley, and maize.

“The autopsies conducted on some rhinos earlier this year showed that they had eaten mustard and other food crops before their death. It is likely that pesticides could be a culprit in many deaths,” said Bishnu Prasad Shrestha, spokesperson for Nepal's Department of National Parks and Wildlife Conservation.

There are also experts who see problems brought about by the scarcity of food and water pollution, or those who fear that the national park may be hosting more rhinos than it is capable of holding. Their theory that many rhinos may have died due to internal fighting among themselves appears valid to a certain extent. The park spreads across 932 square kilometres and hosts around 600 rhinos, according to the 2015 rhino census.

Some others suspect that poaching could be the real reason for rhino deaths and the national park authorities may be keeping the general public in the dark, fearing blacklashes and a cut in the perks they currently enjoy for maintaining a zero poaching zone. In recent months, park rangers have uncovered carcasses of two rhinos under suspicious circumstances. One of the two rhinos even sustained what appear to be bullet injuries. But forest officials refused to confirm it as a case of poaching despite gunshots that were heard and a post mortem report that suggested bullet injuries on the dead animal.

“We ruled out poaching because we did not find any bullets in the rhino’s carcass. Moreover, the horn was intact,” said Baral.

Or, it could be a mysterious disease, or a combination of all the aforementioned factors including diseases, that is harming the species.

The proposed research involving the best rhino experts in the country, and possibly some foreign experts, is likely to be one of the biggest research initiatives of its kind. It is not the first time the government is making efforts for the cause, however. In 2019, the Department of National Parks and Wildlife Conservation conducted research on water quality to check if it was contributing to the mysterious death of the rhinos, but researchers did not find anything suspicious in the water.

“The water quality has certainly degraded in recent years, but it's still drinkable. That’s why we believe that other things might be contributing to the deaths,” said Shrestha.

Kathmandu’s garbage problem is a mess

Mayor Balen Shah’s commitment to improving Kathmandu’s solid waste management system is cause for optimism. But there are no overnight solutions, and the spotlight must stay on the issue.

Reservoir-type hydropower projects might generate much-needed electricity for Nepal but they also come at significant environmental, ecological, and social costs.