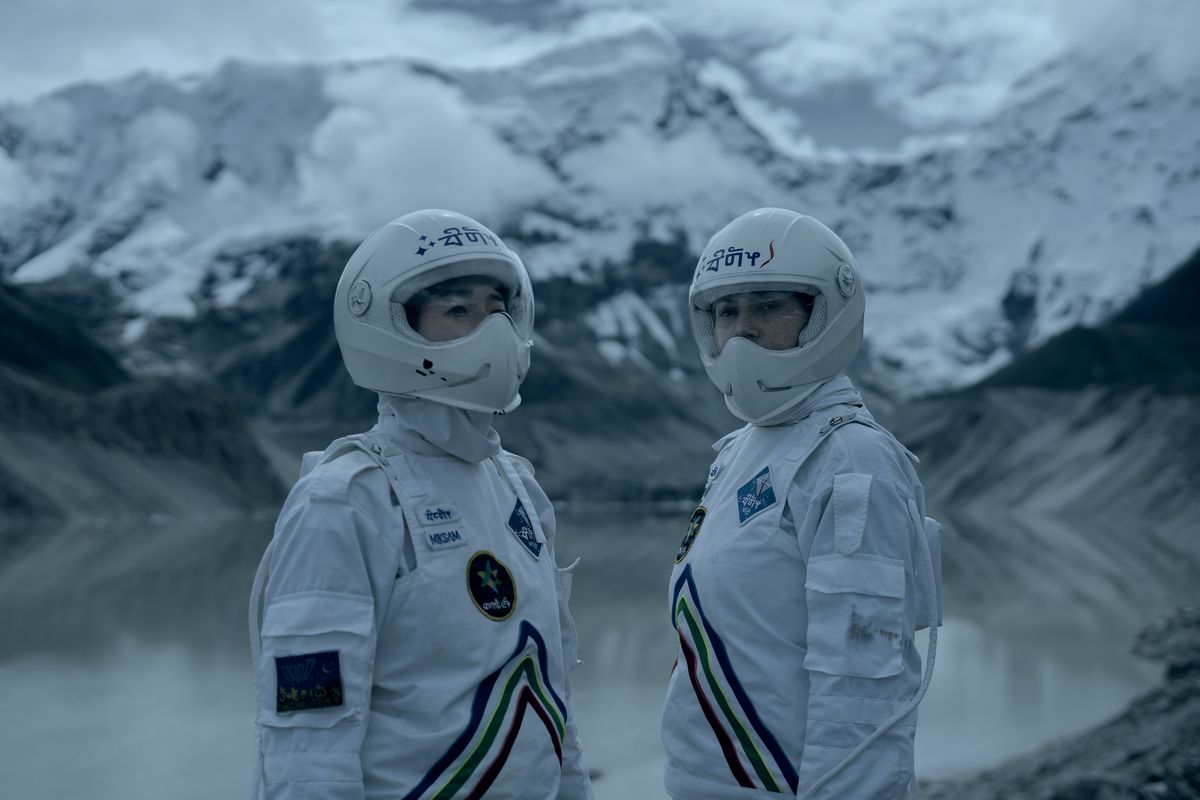 A translucent other-worldly spacecraft descends on a lake surrounded by mountains as two characters, clad in spacesuits, watch. The spacecraft resembles the silam-sakma, a ritual object symbolizing the Yakthung identity while one of the spacefarers reveals herself to be wearing a large bulaki.

These are scenes from the upcoming sci-fi film Ningwasum, which takes place in an alternative future within the fictional Yakthung Nation. Conceptualized and directed by the UK-based visual artist Subhas Thebe Limbu, the 44-minute film is a “docufiction”, a film that combines elements of documentary and narrative storytelling, and is entirely in the Yakthung language. Ningwasum also incorporates animation and electronic music soundscapes into its storytelling.

“The film is a docufiction narrated by a time traveler from the futuristic Yakthung Nation,” said director and writer Limbu.

In the Yakthung, or Limbu, language, ‘ningwasum’ roughly translates to ‘memory’ and the film itself deals with concepts of time, memory, and identity. It imagines a future where the marginalized and indigenous have asserted their identities through the use of technology, a concept that Limbu calls ‘Adivasi Futurism’. Drawing heavily on Afrofuturism, Thebe developed the concept in a 2020 paper that helped him begin “incorporating science fiction with the indigenous lens on my artworks, mainly digital art and sound works- using the indigenous scripts, songs, and symbols of my community.”

“The works of Octavia E. Butler, who is also referred to as the Mother of Afrofuturism, has hugely inspired my current line of research and practice,” said Limbu.

In her book Afrofuturism: The black sci-fi and fantasy culture, Ytasha Womack details how Afrofuturism – whether through the literature of Octavia Butler, the visual art of Jean-Michel Basquiat, the music of Sun Ra, Parliament-Funkadelic or Deltron 3030, or grassroots organizing – attempts to sublimate the tribulations of the past and the present into a more optimistic imagined future.

“Both an artistic aesthetic and a framework for critical theory, Afrofuturism combines elements of science fiction, historical fiction, speculative fiction, fantasy, Afrocentricity, and magic realism with non-Western beliefs. In some cases, it’s a total re-envisioning of the past and speculation about the future rife with cultural critiques,” she writes.

The comic character and film Black Panther, for instance, is a recent example of Afrofuturism that helped change perceptions of African American culture in the west. Camille Friend, the lead hairstylist in the movie, told The New York Times in an interview that the hair designs were “totally Afrocentric.” According to her, the hair of characters in Black Panther helps to communicate the message that “we’re in a moment when people are feeling empowered about being black.”

Adivasi Futurism, too, is about taking power away from the neoliberal capitalist state and depositing it instead in the hands of the indigenous. Adivasi Futurism can, writes Limbu, “be a portal to re-view and re-define progress, de-link the idea of nation states and contrary to colonialist narrative of indigenous people as 'primitive', it could be a space to re-imagine ourselves as not only the storytellers of the past but also as creators of interplanetary and interstellar civilisation of the future [sic]”.

The film Ningwasum, then, is a formal extension of this concept. Rooted in Yakthung culture, the film employs Limbu elements and symbols, like with the spaceship and the wearing of traditional Limbu jewelry.

While making the film, Limbu consulted with Amar Tumyahang, an academic who works in indigenous languages, to translate the script into the Yakthung language. He also conversed with elders and academics from the Limbu community to gain insights into the world view and philosophy of his own indigenous community, which he says has been deemed irrelevant by “colonial power structures”.

“Ningwasum is a film that asks how ‘memory’ can be different for different people and communities, and how those memories can shape our ‘now’,” said Limbu. “It uses the notion of memory and time to weave stories and explores indigeneity, liberty, and climate change, while critiquing colonialism, brahmanical patriarchy, and capitalism.”

Limbu told The Record that he discovered hope and determination among both elders and young ones from the Limbu community regarding decolonization and reclamation of knowledge and liberty.

During the production phase of the film, Limbu worked only with a core team of nine to ten people, including the two protagonists, Miksam played by Subin Limbu and Mingsoma by Shanta Nepali, who is also director of photography for the project. Limbu and Nepali met at an organization that provides education and training to indigenous people. Limbu later reached out to Nepali to bring her on as director of photography for Ningwasum.

“I play a supporting character named Mingsoma who has ancestral Dalit roots and is one of the most decorated time-travelers of the Yakthung Nation,” said Nepali. “Mingsoma is following Miksam, who’s in our timeline in a bid to save her mother.”

Ningwasum is about connection, memory, and history not just for a particular community but for all – whether it is Janajati, Dalit, or other – identities. A lot of people from the indigenous and Dalit community collaborated on the project to make the story more authentic, she said.

According to Nepali, Ningwasum imagines a future where indigenous people have sovereignty, identity, and their culture intact alongside science and technology.

“A future where marginalized folks have equal amounts of agency and space,” she said.

Limbu has shared several references to indigenous culture and its connection to nature and the environment on his Instagram. One particular teaser can be seen with narration subtitled, “Every ceremony thanking mother earth reminded them never to exploit her, ” alongside visuals of a Limbu ceremonial dance.

“Ningwasum also explores the memory of the future, memories of struggles yet to overcome, and stories yet to be written,” said Limbu.” The antagonist would be the power structures fed by the colonial-brahminical-capitalist-patriarchal entity.”

Ningwasum is currently showing at the Asia-Pacific Triennial, Queensland Art Gallery & Gallery of Modern Art in Brisbane. It will be screened in Kathmandu from February 11, 2022 to March 11, 2022 as part of the Kathmandu Triennale.