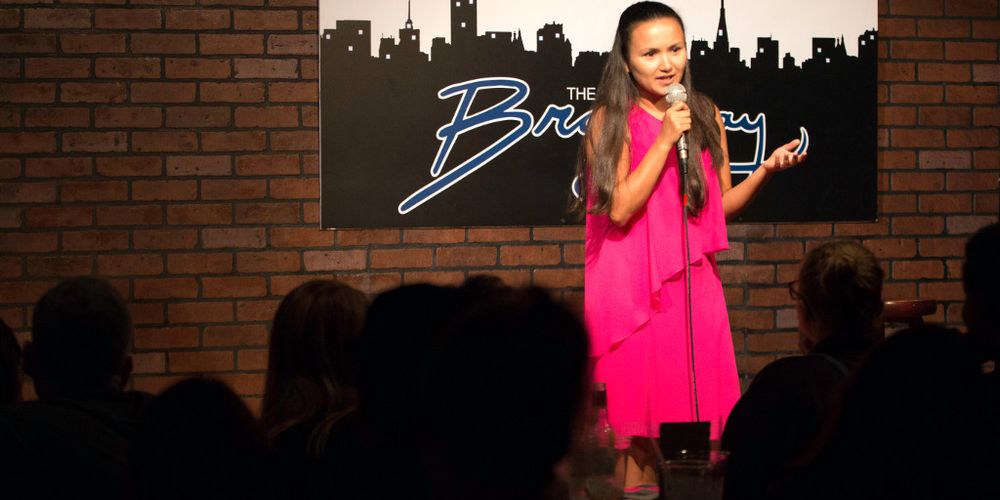 “I eat with my hands,” she begins. “Because in my culture it is important to touch the food, feel the texture, both going in and coming out.”

One of the first Nepali stand-up comics to perform in New York gets her first big laugh of the night.

Hours before she’s scheduled to perform at Manhattan’s Broadway Comedy Club, Kathmandu native Shailee Basnet asks,“Do you want to listen to my new stuff?” as she scrolls through her script on her laptop.

The venue may fall on the lower-rung of the comedy-scene in New York, but for this 34-year-old stand-up comic, it’s a sign of just how far—both geographically and symbolically—she has come from the time she first performed in front of an audience in Patan.

It has also given her the opportunity to test her material with an audience—often touted to be the world’s toughest—before her gig at the more famous Gotham Comedy Club on September 20. “I’d be ungrateful if I said this didn’t happen fast enough,” says Basnet of her foray into the New York comedy-club scene.

In June, Basnet attended a six-week course at the Manhattan Comedy School, whose owner Andy Engel saw her perform at the school’s graduation show. Basnet  reached out to Engel, who is also a producer at Gotham, about the possibility of her performing at the club. After weeks of going back and forth, a date was finally set.

Basnet wants to tell new jokes but decides this is not the time or the place to test the waters. Her new material, she concludes, require a lot of setting up before the punchline can be delivered, and she isn’t sure if the audience in attendance will have the patience.

Unlike her usual 45-minute shows in Kathmandu, Basnet has to make do with ten minutes tonight, which she points out is “a big deal in New York.” “When you go into a show like today, you don’t try new things,” says Basnet. “You go with your tight five, the tried and tested, which is guaranteed to work.”

Although the Kathmandu native has performed at open mics in the city before, this is the first time she’s being featured as a showcase artist. The fact is not lost on the Nepali diaspora in New York, which has taken it upon themselves to market her upcoming gig, and the reporters who all want to tell Basnet’s story.

An hour after I arrive at the Woodside apartment in Queens where Basnet has been staying with a friend, three more journalists follow suit, all wanting to document what could be a turning point in Basnet’s journey as a stand-up comic.

A former journalist, Basnet recognizes the value of media coverage, and is appreciative of the interest that journalists (including this writer) have shown in her story. But she is also beginning to feel the pressure that comes with the spotlight.

As she steps out of the car and onto the corner of the 53rd Street in Times Square, where people are already beginning to queue up for the show, she says “I want to justify this.” It’s not clear if she’s referring to the media attention or the chance to be onstage tonight.

There’s still an hour to go before the show starts. Basnet heads to the green room where other performers are also waiting. She looks slightly nervous and somewhat distant as she settles into a chair and plays with her phone.

Basnet steps onto the stage, and under the limelight any sign of anxiousness I’d earlier seen flicker on her face is now gone.

Tsering D. Gurung  Tsering D Gurung is a writer and communications professional based in Kathmandu.

"Every day was Poetry"

Where there were walls, there are no walls.

The festival is attempting to stir things up through its thematic, content-specific film-making activities in Kathmandu.

Film is not dead

Analog photography is a relic from a bygone era, yet a few enthusiasts still continue to keep the spirit of film alive. But for how long?

Rajbhandari’s artworks reflect not only her evolution and range as an artist but also her ability to combine emotions with core art forms.