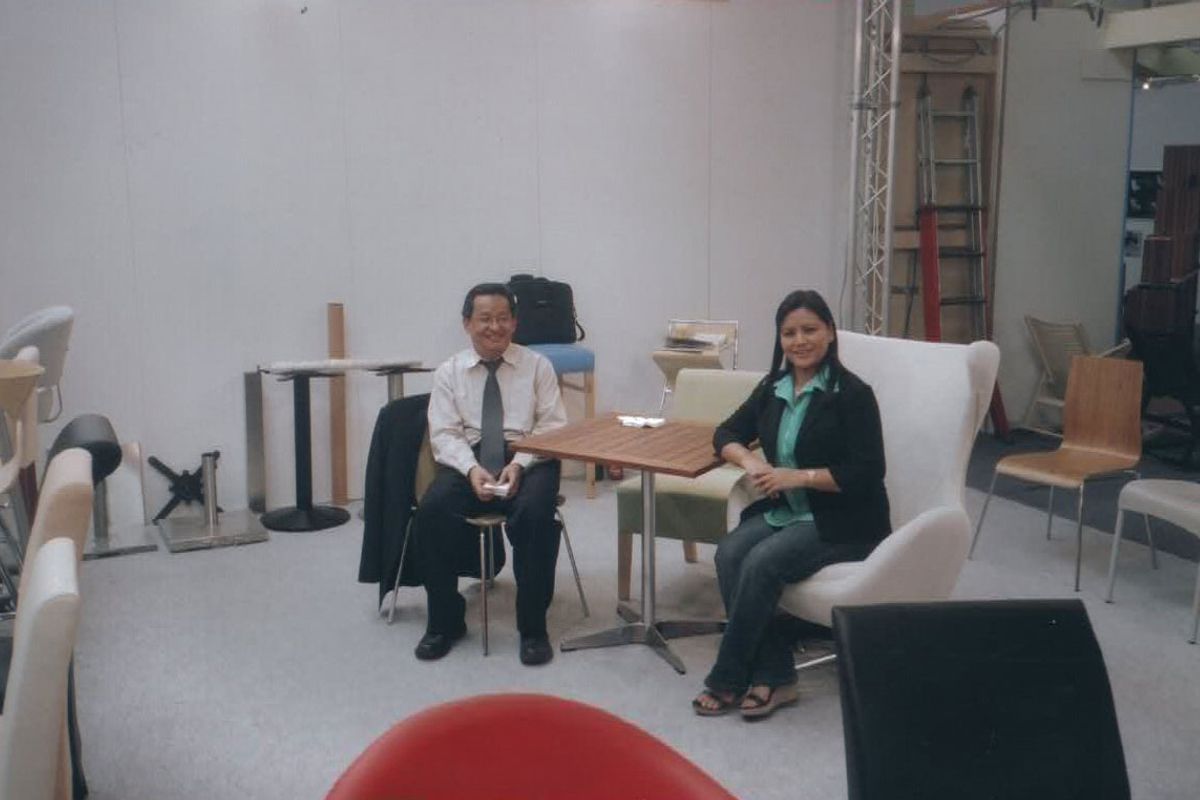 Tim Gurung and his wife at the Bramtrup Exhibition in Germany in 2006. (All photos courtesy Tim Gurung)

This is Part 4 of a series by Tim Gurung on transitioning from a Gurkha soldier to a businessman in Hong Kong and China and eventually to a full-time writer. Part 1 can be found here and Part 2 here, and Part 3 here.

With a small office in Hong Kong and a factory in Southern China, I took my first plunge into the business world, which would eventually show me the rest of the world.

It was the early 2000s and many business people from different parts of the world were flocking to China in search of good opportunities. Countries like Malaysia, Thailand, and Indonesia had lost their allure as a manufacturing base. Vietnam had yet to catch up while Taiwan and South Korea moved up to a higher market, leaving China without much competition to start making everything that the world needed.

The Chinese are enterprising people, and they had one desire, which was to make money, so they went all the way. I remember reading in a book somewhere that if you give the Chinese an empty plot of land and tell them that is all they get, in a year’s time you will find that they have built almost everything they need to sustain themselves. The point being, competing with such a bunch of clever, diligent, and hardworking people was not always easy.

In the beginning, the business we had was insignificant compared to the one I was managing before, which I detailed in an earlier article. But the spirit, enthusiasm, and drive were very high, for I was working for myself. We were in the furniture business and served the hotel and hospitality industry. But since it was impossible to produce everything by ourselves, we collaborated with others and offered an entire package.

Social media and the virtual world were still new. At that time, participating in an exhibition was the best way to acquire new business. My journey as a businessman really started with the Singapore International Furniture Fair. It was a success for a first-timer like me and I returned home with a bucketful of potential customers and future friends. I met my long-term customers then and we still do business with them today. We have become good friends.

After attending the Singapore fair for some more years, I found it too crowded with Asians, who were mainly our competitors and tried somewhere else. I went to the Birmingham Furniture Fair in the UK and had my first experience participating in a fair in a western country. It was eye-opening in the sense that I realized that it didn't fit our needs.

The other experience I did have during that UK visit was something more personal. As a Gurkha, I had always regarded the British as something special, for we had mainly seen them as army officers, and thus, superior to us. When I saw them working like average people, not to mention the work they did for my booth making, the perception I had about them shattered once and for all, and I never felt the same again.

I waited for a few more years before attending other overseas exhibitions. They were expensive events costing tens of thousands of dollars each time. In addition to renting booths, traveling, lodging, and dining expenses, we needed to deliver samples and pay disposal charges. These didn't come cheap. I spent the next few years expanding the scope of my business and only started attending overseas exhibitions again once we were well-established.

China was changing fast, both physically and socially. Roads became broader and smoother; villages morphed into towns, and people became wealthier. Places became unrecognizable within a few months, making our lives much harder, for people became much more competent and the competition tougher.

I don't particularly appreciate following the crowd. To find a new exhibition where none of the Chinese manufacturers had participated, I went to Barntrup, located in the middle of nowhere in rural north Germany. It took place during a yearly gathering for the locals and we were served three meals (breakfast, lunch and dinner) every day. The contacts we made there were modest, but the experience we had was exceptional.

After Barntrup, I exhibited at the International Furniture Fair Tokyo in Japan. Many people visited our booth and I returned home a happy man. Although I couldn't turn them all into customers, I learned a lesson from that trip to Japan. The way you do business in the west won’t work in the east. Both have a different way of doing things – I had to either change my ways or quit. In Japan and the east, being professional, efficient, and good at your work is just not enough. You have to have connections, be one of them, and build trust by doing many extra things outside the job, which was a bit too much for my liking. Therefore, I gave up on the eastern side and concentrated on the western front.

I finally signed up for the International Furniture & Interiors Fairs (IMM) in Cologne, the biggest trade fair of its kind in the world. Visitors from Europe, Scandinavia, the Middle East, and other parts of the world flocked there. After attending IMM Cologne for two more years, I stopped going to the exhibitions again, for we had enough customers by then.

By the eighth year in the business, we had customers mainly from Europe, Canada, the USA, Australia, New Zealand, the Middle East, and Latin America. As I explained above, working with Asian customers had become more complicated due to changing demographics and the nature of business. Customers in those Asian countries could easily go directly to China themselves. Why did they need to go through a Nepali guy anyway? My nature was also different, as I was a non-drinker, concentrated largely on my job, talked less, and never got involved on sideshows.

By the late 2000s, we were already well-established, and I hardly needed to visit China. I initially spent three-to-four days a week in China, but later, I only went there when a customer was visiting. During the Canton fairs, which took place twice a year, many customers came to visit us, so we went to China for a couple of days.

My wife accompanied me on all those overseas trips, and we managed to take care of our customers. By then, both of my children had completed high school and my wife finally joined the business full time.

The business environment around the world was changing fast and the late-2000s financial crisis arrived, affecting all businesses, including ours. In 2010, we attended the Paris Furniture Fair and headed to the UK to meet our relatives who had just moved out of Nepal after the Gurkhas had won a historical ‘right of abode’ in the UK in 2009. The Paris Furniture Fair turned out to be our last exhibition, and we never went to another exhibition again.

Business showed me the world and taught me a few things about people around the globe. Despite their uppityness, the British were not as snobbish as their British Gurkha officers. The French want to work among themselves, and Belgium has two separate groups – the French-speaking and the Dutch-speaking. Germans are industrial people. Americans are loud. People from the northern hemisphere drink a lot, and Scandinavians are great people to do business with as they seldom bargain. Governments in the Middle East and Africa create as many problems as possible to make their people's work difficult. And it's all about connections in Asia if you want to run a successful business. This was a critical lesson I learned, one that became pretty useful later on when I became a full-time writer.

In the next edition of this series, I will write more about the problems I faced as a businessman and what made me give up everything to turn to writing full-time.

Rupak Darshan travels the streets of Kathmandu every day, feeding hundreds of dogs, all out of a love for these animals and a desire to lessen their suffering.

The Chinese who are learning Nepali

Nirman Shrestha uses his art to document his experience of living with depression.