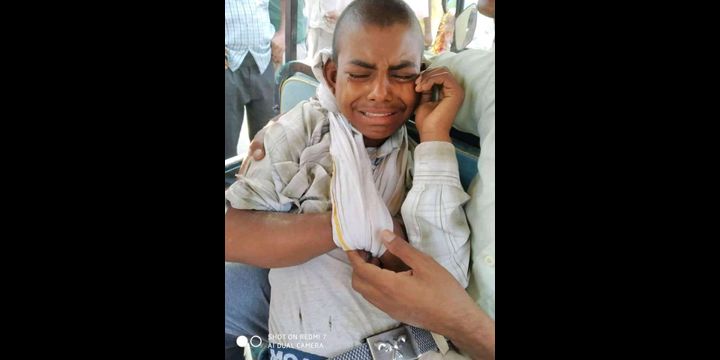 On May 20, fourteen-year-old Omkar Yadav was on his way to buy sugar at a grocery store in Puraina, Nepalgunj, when he saw around a dozen policemen coming toward his neighbourhood with batons in their hands. There were rumors that the police were about to raid a local garden, some 200 meters away from the road, where local youths were playing cards, defying the government’s order for physical distancing. The sight of the police made Omkar somewhat uncomfortable, but he didn't run away, unlike a few others. According to the statements he made to the Record, he didn’t move because he had done nothing wrong. Moreover, everything was looking calm.

All of a sudden, the police started to lathicharge everyone around the vicinity. One constable policeman grabbed Omkar by the arms and hurled him to the ground. In a matter of minutes, and while Omkar still lay unconscious on the ground, more than 200 locals from the neighborhood gathered around him. They protested by chanting slogans against the police, pelting stones and vandalizing a private car that belonged to an assistant inspector. The police retreated after a few people had been injured on both sides. Some locals then volunteered to rush Omkar to Nepalgunj Nursing Home where he had to undergo surgery after an X-ray scan showed two fractured bones on his right hand.

“It cost 21,000 rupees just to get operated. More than money, we are worried that his hand might not be normal again as he is still complaining of pain,” said Omkar’s brother, Dilip.

Omkar is the latest victim of state atrocities on innocents, a trend that has become widespread ever since security forces began exercising unchecked power in the name of enforcing the Covid19 lockdown. Earlier in May, Nagendra Patel, 67, a retired employee of Nepal Telecom, had to be hospitalized and undergo surgery for fractured bones after Nepal police personnel assaulted him for allegedly defying the lockdown. Patel had stepped out of his house to buy milk for his grandchildren. The police were forced to apologize, just as they did during the assault on resident doctors of Kanti and Teaching hospitals, and during assaults on Kalanki locals who were attacked while they were on their way to buy medicine. Back in mid-April, just three weeks into the lockdown, Jayanab Khatun, a 62-year-old mother collapsed to death in Khadak Municipality, Saptari, while attempting to protect her son from the batons of police officers. The police were in the midst of thrashing a group of some 15 youths for violating the lockdown. Khatun’s son was one of the youth and she had run to his rescue, but got fatally injured herself.

But no such thing happened in Omkar’s case. The Banke administration has, instead, started making one arrest after another, slapping false charges on innocents. Hours after the incident, the police arrested Durgesh Thakur and charged him with allegedly attacking police officers on duty and vandalizing the car. Three more arrests followed, of Ramesh Yadav, Binod Yadav and Budhi Yadav. The police claim that four individuals masterminded the attacks, but eyewitnesses and some local representatives said that they all were innocent men being framed by the police.

“They were all in their homes while the incident took place,” said Berjesh Thakur, a local.

Ranjit Khan, a local representative of the Nepalgunj Metropolitan City, said that all those who got arrested were trying to help Omkar.

“Durgesh and some youths had taken the boy to the hospital. From what I have learned, they were helping the kid,” said Khan.

For countries like Nepal with neither good healthcare nor adequate resources, the police’s role in enforcing proper physical distancing and lockdown have become more important than ever. In fact, the proper enforcement of the lockdown and physical distancing remain Nepal’s only hope for minimizing the harm of the pandemic.

In the Terai, indigenous Madhesis and Tharus have long viewed security forces with distrust due to alleged use of excessive force time and again, including during various past protests against the state. Incidents like the one described above have not only put a spotlight on what has become a trend, but also forced many to question if such harsh policing should be permitted at all. Instead of ensuring security, policing measures are proving dangerous to many civilians, especially those with pre-existing health conditions.

On May 15, Adarsha Mishra, a standup comedian, was returning from the Birgunj-based National Medical College with his father who has to undergo dialysis for his kidneys twice a week. The police stopped them on the road.

“I don't know what dialysis is, but you cannot go. If you want to go to the hospital, use an ambulance,” Mishra caught the police saying in a video message later shared through his twitter account.

There are times when gross insensitivity and lack of empathy on the part of security forces results in tragedy, just as it happened last week with Birendra Yadav. A 30-year-old inhabitant of the Shahid Nagar Municipality in Dhanusa, Yadav died due to medical complications at the Jatahi border-point in Madhubani District on May 27 while returning from Ahmedabad, India. Ramdev Marik Yadav, chairman of ward no. 9 of the Shahid Nagar Municipality who knew Birendra, said that police officials had refused to let him in despite his repeated pleas that he be taken to the hospital.

“He repeatedly told police that he wasn't feeling well and asked them to call an ambulance to take him to the hospital. But the security forces would not listen,” said Yadav.