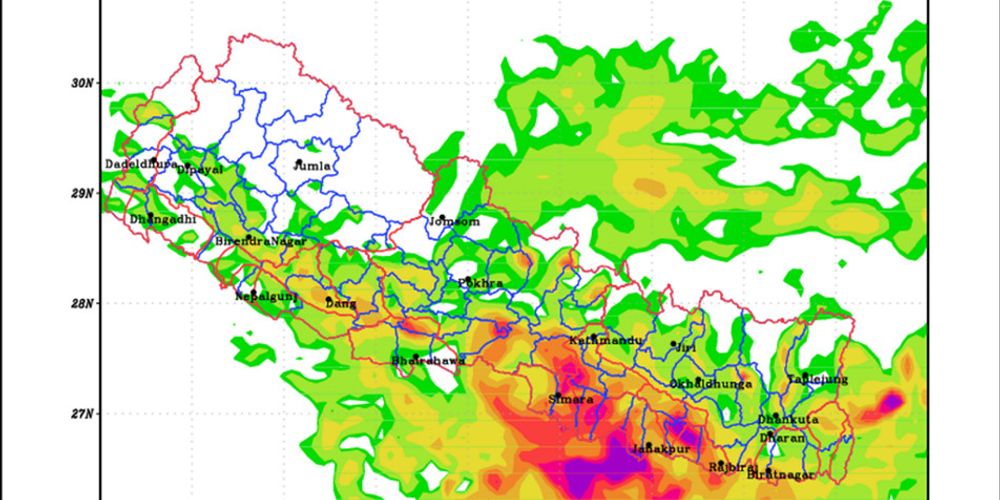 As heavy rains across Nepal precipitate a national crisis, we spoke with Rajendra Sharma, a senior divisional hydrologist at Flood Forecasting Section, Department of Hydrology and Meteorology.

Why are we seeing such heavy rain this year?

The main reason for the heavy rain is that the monsoon system’s low pressure zone has at once concentrated and entered Nepal this time around. In the past we saw smaller systems gradually enter the region, but this time the depression zone of the monsoon extends from eastern to central Nepal.

We have also seen cloudbursts, where there is intense rainfall for a short period of time. We estimate that this system will contribute between 70 to 80 percent of the annual rainfall this year.

(NOTE: Nepal’s biggest cloudburst occurred on July 19-20, 1993, in central Nepal, which killed 1300 people. In a period of about 24 hours, the cloudburst dumped nearly half the total rain of that monsoon season.)

What has been the trend in rainfall over the years, and is this due to climate change?

Researchers studying this do connect it to climate change. But the least we can say is that while the total annual precipitation (around 1700 cm on average) in the last 30 years has remained more or less the same, there is growing gap between rainy and dry days. For instance, before the onset of the rain recently, some areas in Terai were being flooded while some saw drought-like weather. According to a forum of scientists in South Asia (SASCOF), this monsoon is expected to be heavier than usual.

Can you tell us about the different monitoring systems you have?

What kind of links do you have with rescue operations?

We have a 24/7 link with National Emergency Operation Centre and they have a live display board showing our data. We are also sending mass SMS to residents of the potentially dangerous areas. There has been an increase in the traffic to our website also, which is facing some difficulties due to low capacity on our server.

What can we expect in the next few days?

The rain will last at least a one or two more days, according to the rain watch division at the DHM. The system is gradually moving towards the west.

The interview has been edited for clarity and concision.