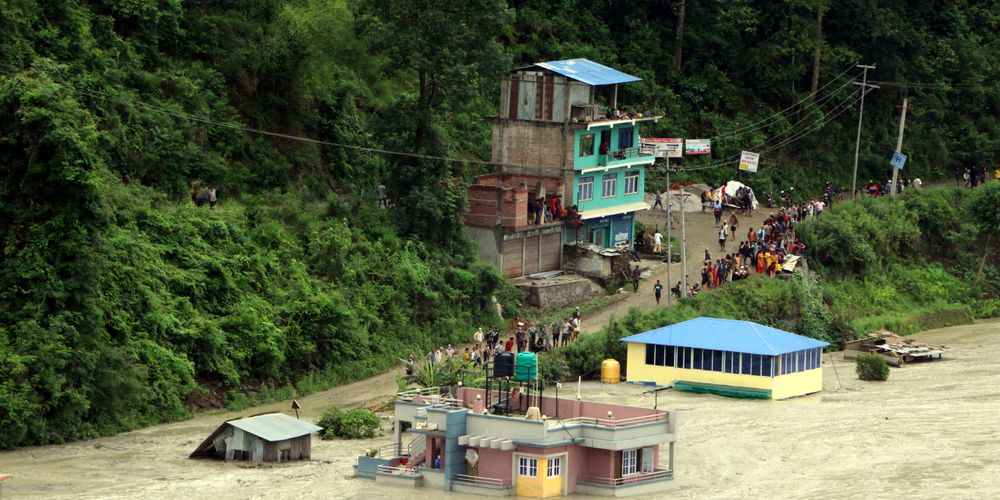 Every year, the monsoon leaves a devastating trail of loss across Nepal. Last year, Nepal witnessed its worst monsoon in the past two decades in terms of casualties -- there were 500 major landslides, nearly 300 killed and 70 missing.

This year too things are looking grim. In just its first week, the monsoon rains have already caused immense damage — rivers and streams have swollen up dangerously, landslides have eaten away chunks of hills, and settlements swept away across the country. Social media feeds are filled with alarming footage of the flooding of Melamchi municipality in Sindhupalchok, where hundreds are currently displaced.

As the calamity unfurls, here’s a quick explainer to keep track of what's happening.

Which regions are most heavily affected?

Since the rains came last weekend, on June 11, hill districts like Palpa, Pyuthan, Syangja, Lamjung, Baglung, and Bajura have been hit hard. But the district hit worst is Sindhupalchok.

On June 15, there was a flash flood on the Melamchi river, which experts say is a result of the sudden bursting of the river blocked by landslides triggered by incessant rainfall over the past week.  Three persons, including two Chinese and one Indian, lost their lives in the flood, whereas 17 others, including two Indians and one Chinese, are still missing.

In addition, the Sindhupalchok District Police Office said that the flooded river has swept away eight resorts, two motorable bridges and six suspension bridges from Helambu to Melamchi Bazaar. As a result, more than 150 houses have been inundated and hundreds of people — around 600 people in Melamchi and 300 in Helambu — have been affected by the flooding.

In other parts of the country, like in Gorkha, the rain-swollen Budhi Gandaki river swept away four houses in Chumnubri-3 on Wednesday. In Parbat, 15 houses were destroyed and dozens of households displaced. Several districts of Lumbini province were also affected by floods and landslides with road disruptions in many districts.

Why are the floods so alarming this year?

Every year, as the monsoon progresses, news of floods in the Tarai emerge. But this year — and the last — devastation is being witnessed early on in the hills and even mountainous regions of Nepal.

“It is deeply worrying that high-intensity rainfall is shifting towards the hills and even mountains,” said Madhukar Upadhya, a watershed expert. Videos of a river in Chame, Manang, being inundated had emerged on social media platforms on June 15. After three days of incessant rainfall, it was reported that more than 56 families have been displaced by a flood in one village after it was inundated by the Marshyangdi river.

“Like last year, this year too, the rain poured down very heavily very quickly, instead of gradually building up like it would naturally. Such a change in rainfall pattern is disastrous for regions higher up in altitude, owing to its social, physical, political limitations,” said Upadhya.

The change in rainfall pattern, which Upadhya says is a result of global warming, can have devastating impacts on the country’s infrastructure as well, especially the hydropower sector.

According to The Kathmandu Post, the Melamchi river flood has caused significant damage to the Melamchi Water Supply Project, destroying ongoing construction and sweeping away camps for construction workers, construction material, concrete, and Bailey bridges. According to Nepali Times, at least another 12 under-construction hydropower plants have been badly damaged around the country.

Why is Sindhupalchok so prone to natural disasters?

“That could be because of its geological structure. Half of the district, north of the  Sunkoshi river, is a wet area, which sees a lot of rain. And the south of the Sunkoshi is very dry,” said Upadhya. “There are pockets in the districts where cloud bursts can take place and then there are very dry regions with no water, making it sensitive to any anomalies.”

There are also studies that suggest the 2015 quakes have weakened the hills in the district, making them extremely vulnerable to landslides. “On top of that, there is continuous exploitation of natural resources in the hills in the name of development. All this has made the region more prone to monsoon disasters,” said Upadhya.

Is the worst over?

For years, experts have been sounding the alarm on changing rainfall patterns that can induce extreme rainfall to cause flooding across Nepal. However, the Nepal government has done little to be better prepared.

“Floods and landslides cause devastation on people every year in Nepal. Despite that, the country’s disaster preparedness has not been up to the mark,” said Upadhya.

Recently, in an effort to lessen the impact of the monsoon rains, the National Disaster Risk Reduction and Management Authority under the Home Ministry has prepared the National Monsoon Early Preparedness and Response Work Plan 2021.

But such policies come in a little too late and are hardly ever implemented.

The government’s monsoon action plan, which estimated that over 1.8 million could be impacted by monsoon-related disasters this year. In it, Dolakha, Sindhupalchok, Bajura, Dhading, and Doti districts are expected to be most likely to be hit by severe landslides.

“Monsoon is a natural phenomenon but such concentrated, high-intensity rainfall is not natural, and it is becoming more frequent, and what it’s long-term implications will be, nobody knows,” said Upadhya.