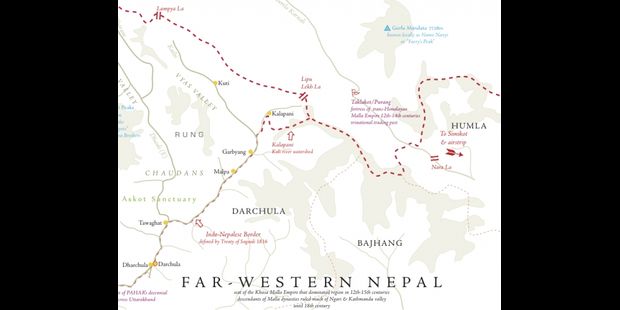 Nepal’s Ministry of Foreign Affairs (MoFA) has objected to the opening of a new road connecting Dharchula in Uttarakhand to the Lipulekh Pass in Sudurpaschim, urging New Delhi to refrain from carrying out any activity inside Nepali territory.

“The Nepal government has learned with regret about India’s ‘inauguration’ yesterday of a link road connecting Lipulekh, which passes through Nepali territory,” MoFA said in a statement on Saturday. According to Nepal, the Sugauli Treaty of 1816 deems all territories east of the Mahakali River, including Limpiyadhura, Kalapani and Lipulekh, as Nepali territory.

The statement comes a day after India’s Defense Minister Rajnath Singh inaugurated the road via a video conference, dubbing it as the shortest route to Kailash Mansarovar.

MoFA has reiterated its stance several times in the past. On 20 November, 2019, the most recent diplomatic note addressed to the Indian government responded to a new political map issued by India. According to MoFA’s statement, Nepal has proposed dates for holding a meeting between the foreign secretaries of the two countries twice, but has not received any response from the Indian side. Criticising the unilateral act by India, the statement calls for diplomatic solutions to boundary issues while keeping in mind “the spirit of close and friendly ties between the two countries.”

MoFA also stressed on the need to address all outstanding issues documented in a report by Eminent Persons Group (EPG). Currently, the report by EPG, a bilateral mechanism formed to revise various treaties between India and Nepal, remains to be made public due to the unwillingness of the Indian side. The Nepal government has expressed its willingness to implement the report, insisting that it will be in the best interest of both nations to follow its recommendations which will help address outstanding issues and pave the way for even stronger bilateral ties.

In its choice of words, Saturday’s statement is possibly the strongest from Kathmandu. In 2015, the government had objected to the India-China agreement to include the Lipulekh Pass as a bilateral trade route without Nepal’s consent, and in 2019, to India’s release of a new political map which included disputed territories.

MoFA’s objection comes at a time when the Oli government is facing growing criticism for remaining oblivious to the construction of the road, especially after having failed to register a strong objection during the release of the 2019 map. On Saturday, the Sajha Party described the inauguration of the road as an “interference on Nepal’s sovereignty and territorial integrity” and criticised the government for remaining but a silent spectator. A group of youth were arrested from the Maitighar Mandala on Saturday for protesting against the Indian government.

The area around Lipulekh and Kalapani has long remained a disputed territory between Nepal and India, although the Sugauli Treaty signed between Nepal and the East India Company, and treaties signed later with independent India, acknowledge the Mahakali River as the boundary between the two countries. According to Ratan Bhandari, a researcher who has penned a book on Kalapani, Indian troops captured Nepali land during the 1950s, although attempts to alter the map had started much earlier, soon after Nepal and the British Raj unveiled a joint map in 1856. In the present day, India recognises “a sub-stream of the Mahakali River as the borderline.”

On Saturday, the parliamentary State Affairs and Good Governance Committee and International Relations and Labour Committee separately summoned Home Minister Ram Bahadur Thapa and Foreign Minister Pradeep Gyawali to be present in a meeting the following day for briefing on the development.

Many suspect that MoFA’s press statement might be just a tactic to quell domestic pressure instead of a strong diplomatic note.

“The press release is good! Now expecting a strong diplomatic note with similar tone, together with diplomatic demarches both in Kathmandu and New Delhi,” Madhu Raman Acharya, a former foreign secretary, tweeted.

According to Buddhi Narayan Shrestha, an expert on border issues, Prime Minister KP Sharma Oli should immediately hold telephone conversations with his Indian counterpart and ask India to halt all activities until the resolution of disputes.

Speaking to the Record, Shrestha asserted, “A press statement from an unnamed foreign ministry official is not sufficient. The PM should hold a one-on-one call.”