From soldier to businessman

From soldier to businessman

In his article, Tim Gurung recollects his experiences moving to Hong Kong in the 90s and transitioning to a new life in business. 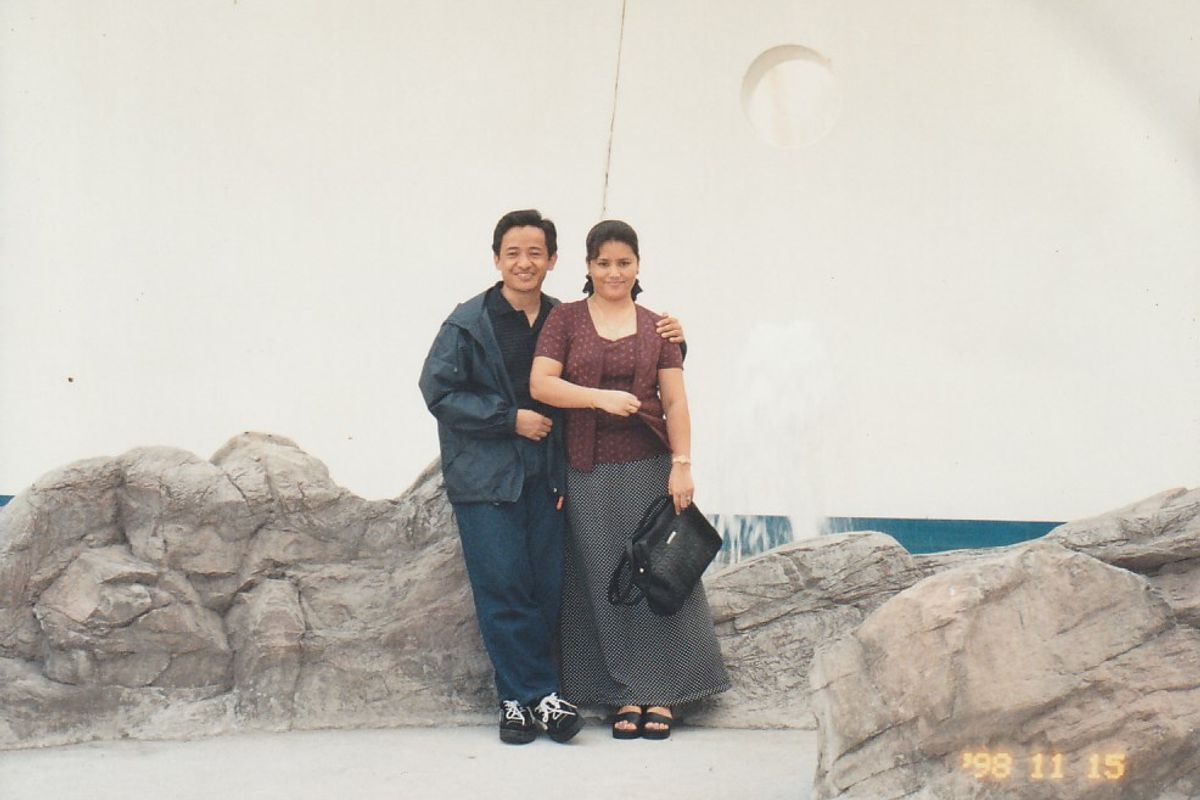 Tim Gurung with his wife in Hong Kong in the late 90s. (All photos courtesy Tim Gurung)

This is Part 3 of a series by Tim Gurung on transitioning from a Gurkha soldier to a businessman in Hong Kong and China. Part 1 can be found here and Part 2 here.

After my career as a British Gurkha soldier ended, I boarded a plane to Hong Kong to begin my new life as a civilian. At that time in the early 90s, Nepali citizens didn't require a visa for Hong Kong as a month-long visa was granted on arrival. Like most Nepalis then, I too went to Chungking Mansions, a building that is infamous for its low rent and inexpensive accommodations for tourists mostly coming from South Asia. Locals mostly avoided the place and despised it for its dirty exterior and unruly visitors. I, of course, wasn't aware of the locals' unfavorable perceptions towards the Chungking Mansion and went there, as one of my relatives used to live there.

As I detailed in my last article, I had managed to get a job as a Quality Controller in Hong Kong and the job entailed weekly trips to mainland China.

As I reported to my new job the following day, I found everyone to be friendly and welcoming. The company was not too big, staffed with a little over a dozen individuals, and all of them were local Chinese, except the boss and his business partner. My boss was a young, fit, and hardworking Frenchman. Hiring former Gurkhas had become something of a trend in Hong Kong by then, and all the rich and powerful people had jumped onto the bandwagon. My boss too appeared happy to have successfully hired a former Gurkha.

I had a week in Hong Kong to find my feet in that new world of mine before we headed to China. Since I had no experience in business, I had to start everything from scratch, and you didn't get to take classes in the real world. All I had for a start was to study the existing files, work in the sample room, and speak to other colleagues whenever possible. To my dismay, I found out that my Cantonese, which was heavily laden with military jargon, wasn't up to the standards of the civilian world. I had to improve it a great deal to even hold a normal conversation with my colleagues in Hong Kong and China.

In the second week of my new job, we boarded a fast ferry at Kowloon and arrived at Zhuhai after a little over an hour's sea journey. By then, I had already left Chungking Mansions and moved into a small room that I had rented near my workplace. The room was just big enough to fit a bed and a suitcase, and I shared the apartment with a Chinese family.

Zhuhai, located at the southern tip of Guangdong on the Pearl River delta near the gambling center of Macao, was one of the first three small cities designated by the Chinese government to get the first taste of capitalism in the communist country. The other two cities were Shenzhen and Xiamen, tentatively known as Special Economic Zones (SEZ). Each city had distinct boundaries, rules and regulations, and free taxes. Foreign enterprises were invited to open up businesses there. Chinese leaders would expand the SEZ to other parts of China if the experiment was deemed successful. There was even a separate currency for foreigners, called Foreign Exchange Certificates (FEC), which held a slightly higher value than the Yuan/Renminbi, China's official currency. And everyone needed a special permit to enter those particular zones.

The factory we visited was a modest one. Most of the workers were young men from other provinces, and everybody worked from eight in the morning to six in the evening. The factory provided three simple meals (breakfast, lunch, and dinner), and they slept in a communal dormitory. Back then, the basic pay was less than 300 yuan per month, and they got paid one-and-a-half yuan per hour overtime.

It was 1993 and China was still in the process of opening up. It remained a communal society where people dressed modestly, worked in factories, and went home at six on their bicycles. And yet, I was amazed to notice all that was going on in China. It was as if a giant beast had just woken up from a long sleep and decided to get back to work. No matter where you looked, all you could see was construction, and everyone was always busy building something.

Most factories with international clients had an interpreter who spoke English with a heavy Chinese accent. Cantonese is the commonly spoken language in the Southern provinces of Guangdong and Guangxi, including Hong Kong and Macao, while Mandarin was mainly the workers’ language. Even though I visited Guangdong regularly, it took me at least six months to learn enough of the language to be able to communicate appropriately with them.

My job as a Quality Controller was to visit factories in China, make a report, and decide whether the goods met the basic requirements to ship to overseas customers. We had a standard procedure and recorded all the details in the report. We also attended the loading of the goods and took pictures as proof. After a weekly meeting in Hong Kong on Monday, I used to go to China on Tuesday and only returned on Friday evening.

One of the first things that I noticed in Hong Kong as a civilian was the rude and discriminatory behavior of the police towards new arrivals. I remembered them as pretty polite and meek when I was in the army but the police at the customs were the worst. The ones at the Hong Kong/Shenzhen border were notorious Nepali-haters. I had to pass through that border weekly and I hated it, as I was singled out and frisked humiliatingly every time.

That behavior has continued well into the modern day. Hong Kong immigration didn’t even spare Nepali dignitaries and held up former Nepali prime minister Baburam Bhattarai and his wife for an hour when they came to Hong Kong after attending an official event held in China in 2016. The discriminatory behavior only added to my dislike of crossing borders. Besides, I was lonely without my family and friends. Therefore, I used to spend more time in China than in Hong Kong during my early days.

My wife and two children eventually joined me in Hong Kong in 1995, and we moved into a single flat. Since my salary alone was not adequate, my wife started working as an assistant teacher at a Canadian international school that my two children attended. We both worked extremely hard while leading a modest life. Our financial position started to improve as I established myself within the company, and our income grew.

My boss was a stereotypical Frenchman who didn't like working with customers other than the French themselves so he would ask me to accompany them to China. These foreigners typically came to China during the famous Canton Fair, and we would be very busy taking them to factories around Guangzhou. Those trips also took us to other parts of China like Guangxi, Shanghai, Hangzhou, Suzhou, Ningbo, Qingdao, Beijing, Xiamen, Wenzhou, and many more.

As an outsider with no business background or formal training, I had to work doubly hard to make my mark within the company. Moreover, I was always taken for granted by everyone within and outside the company. However, I focused on my job, gave my best, and persevered without giving any attention to anything or anyone. An opportunity came when our main guy in the China factory succumbed to newly found success and began to falter. He started arriving late to work as he spent most of his evenings drinking and dining at expensive restaurants. I was then handed over the operations of that particular factory, and we doubled production capacity within a few months.

With business booming, we had to work overtime almost every night. I would stand to the side while workers loaded goods into containers until 1am at night. The fact that I stood by them the entire time earned their respect. I still keep in touch with the friends I made during that time, and we cooperate even today.

After seven-and-a-half years of working at the company, I climbed the corporate ladder and managed to become one of the top men in the company. I had money, power, and position, but for some reason, that didn’t please me. I was a changed man and I had found my true self without even realizing it.

When I come to think of it, there were three reasons that led me to change the course of my life. First, I had overgrown my shoes and needed a new challenge. Second, I had realized that I like to be my own boss and I am pretty comfortable with my decisions. Third, I had already given my best to the company, and it was time for me to move on. Furthermore, we were well established in Hong Kong and I had real friends both inside and outside China. As a permanent resident of Hong Kong, we were able to use a separate lane while crossing the border and I never had to face humiliation at the hands of Hong Kong’s racist customs police officers anymore. I really couldn't ask for more.

In 2000, I quit my well-paying job and decided to start my own business. Like every other business, I faced teething problems initially but gradually started to improve. We have now been in the industry for the last 22 years. The story of the challenges I faced as a Nepali businessman in Hong Kong and China and how I overcame them to become a successful international business based in China will be told in the next edition of this series.

Sabin Ninglekhu: ‘Validation is to be found in the struggle within’

The joy of writing

This week, for Writing Journeys, series editor Tom Robertson asked contributors what they enjoy most about writing. Here are their answers.

Indu Tharu: Whatever I want to write about has to touch my soul

Activist and researcher Indu Tharu recalls what it was like growing up and studying during the civil war and how that experience formed her writing consciousness.

Rebel with a cause

Lessons on living fearlessly from the writer Sulochana Manandhar Dhital

This week, The Record staff pick their favorite pieces of advice from the Writing Journeys series.

How to improve academic writing

Since a lot of academic writing is unnecessarily difficult to follow, here are easy tips from accomplished academics on how to write simply, clearly, and succinctly.