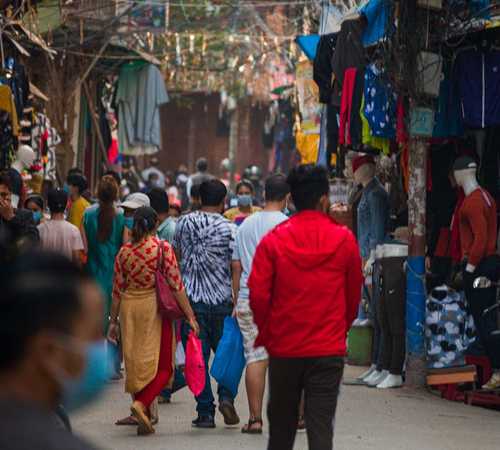 One obvious reason for the surge in cases was the increase in PCR tests. A total of 14,739 tests were conducted in the past 24 hours, the highest number of daily tests conducted so far. This proves the claims of critics that the Covid case numbers are higher than has been reported till now.

Nepal has been conducting, on average, around 10,000 tests per day. There are 53 laboratories in the country that could together conduct over 25,000 tests daily. But experts' recommendation to boost testing has fallen on deaf ears, and national laboratories remain under-utilized in confirming cases.

In the meantime, hospitals continue to fill up, while health workers have now started dying of Covid-19 infection. Just recently, Dr Hari Sapkota, a senior orthopedic surgeon in Karnali Province, succumbed to the disease.

Perhaps the worst hot spot now is Kathmandu, which has become a breeding ground for the virus. But the government has no concrete plan to contain the virus in the Valley’s densely populated areas.

On Friday, a total of 1,638 new cases were confirmed in Kathmandu Valley. These numbers comprise 60 percent of the national tally for the day. And of the 11 deaths reported on Friday, five occurred in the Valley, according to the Ministry of Health and Population (MoHP).

These figures suggest that the virus has probably spread to all corners of the Valley. And the numbers will probably keep spiking ahead of the festive season: with festivals like Dashain, Tihar, and Chhath around the corner, the Valley is seeing increased mobility of people. The Valley’s shopping districts have seen a marked uptick in crowds.

Public health experts are not surprised that the virus is raging in the Capital. “The increase in cases was expected, as more and more people have been exposed to the virus now,” said Dr Lhamo Sherpa. “The government’s regulations have not come into effect. Restaurants, gyms, salons, etc are all open. And when people congregate, they do so without wearing masks or maintaining social distance.”

Furthermore, the government’s odd/even vehicle mandate--the only government regulation that is being implemented with any force--is not backed by scientific evidence that the protocol will help contain the virus. And owing to the odd/even arrangement, the Valley is seeing vehicles packed with people--an unintended consequence of the rule.

Overall, largely because the government has bungled its containment strategy, Covid-19 cases have increased significantly, especially in recent days. A total of 22,877 cases were confirmed in the past 15 days. When the government relaxed prohibitory orders on September 17, the total number of Covid infections in the country was 59,773. That number has now reached 82,450.

But despite the spike in cases, the government has no strategy or any real plan to contain the virus. All it has done is request the public to follow safety protocols.

The recent law on acid attacks is a step in the right direction but it would’ve gone a longer way had it also accounted for burn survivors.