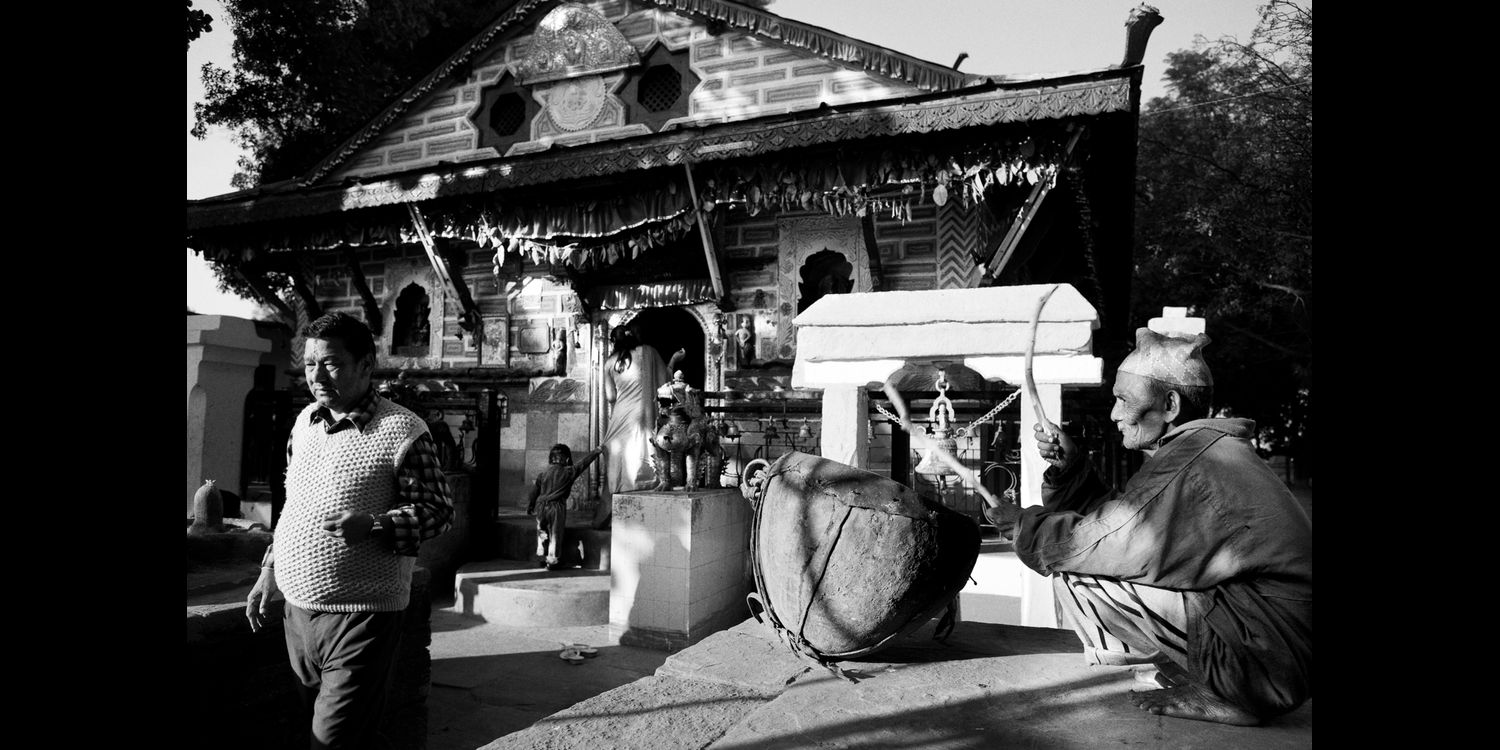 Doti, 2007 Hira Parki has been playing his drum outside the Shaileshwori temple since he was ten years old. But he had not entered the temple even after sixty-four years of doing this. Even when Dalit activists fought and won the right to enter the temple, he was too afraid to enter. When activists dragged him in, he screamed fearing death and passed out. Photo Credit/Dalit: a quest for dignity (The Record)

Time and again, the use of the word ‘dalit’ has been in the eye of the storm in Nepal. The heinous crime in Rukum—murder of Nabaraj Bishwokarma and his friends—has once again pulled the word back in debate. Posts and comments shared on social media distinctly show that half of society is largely indifferent towards the regular deaths of Dalits, with little surprise that most of them belong to the so-called higher castes. The prime concerns raised by such users is not about the reality of the incident, but rather the attempt to somehow justify that what happened was, in a way, right. They refuse to believe that casteism was one of the triggers of the incident. Majority of such people believe that these incidents may continue, that untouchability itself will continue as long as the word ‘dalit’ is used to refer to those belonging to the lower castes and as long as they continue to receive affirmative action offered by the state. Before making such far-flung statements, it is necessary to acquaint oneself with the history and semantics of the word.

‘Dalit’ was first used by the Indian anti-caste social activist Jyotirao Phule back in the 19th century as the Sanskrit/Marathi word to refer to the hitherto ‘untouchable’ castes. The word gained further popularity after Dr Bhimrao Ramji Ambedkar used it in the mid 20th century to refer to all kinds of depressed and marginalised people, including women, irrespective of their caste. Later, he used the term largely to refer to the lowest castes in the Hindu caste hierarchy. The Poona Pact, an agreement signed between Ambedkar and Gandhi on the reservation of electoral seats for the depressed castes, first officially used the word ‘dalit’ in 1932.

Read also: Caste has been essential to the Nepali Hindu state

The term was further revitalised when the Dalit Panthers, a social militant organisation, was formed by a section of the Bombay youth to combat caste-based discrimination in India in 1972. The Dalit Panthers were inspired by the Black Panther Party, founded in California in 1967 by Huey Newton and Bobby Seale, which served to combat violence against blacks during the civil rights movement in America. ‘Black Independence Day’, an article written by a member of the Dalit Panthers, Raja Dhale, is still considered to be a historic and provocative writing that pushed Indian politics to be attentive to the concerns of Dalits.

Though it is unclear when exactly the word ‘dalit’ was first used in Nepal, many politicians and writers believe that it was used around 1966-67. Official registration of the Rastriya Dalit Janabikas Parisad was rejected by the Panchayat system over quibbles with the use of the word ‘dalit’. The Panchayat leaders did not want the lower castes to organise under the umbrella of the word. Twenty years later, the Samata Samaj Utpidit Jati Utthan Sangh was registered, but ‘dalit’ was still not a politically accepted term. Four years later, the Ekata Kendra Political Party included the term in their political manifesto and appealed for the provision of reservation for Dalits. A year later, Nepal’s Utpidit Dalit Jatiye Mukti Samaj was formed. In the 1990s, every other political party started using the common nomenclature dalit to represent socially, economically and oplitically oppressed castes who are at the bottom o fthe Hindu caste hierarchy, establishing a separate political wing for Dalits. The Maoist revolution boosted the use of the term in every corner of the country. With every social political movement in Nepal and India, the term gained momentum, with an emotional resonance that only increased with time.

Many belonging to the privileged castes claim that the word ‘dalit’ triggers discrimination and ensures its perpetuation, since the word itself signifies the condition of being oppressed. With this logic, they sometimes even justify and defend the injustice inflicted on Dalits as something obvious and correct. What enables someone to make such assertions? Why would anybody be so allergic to the word ‘dalit’? There are several possible reasons for this. First, it may arouse a feeling of victimhood in them for not being offered any form of formal affirmative action by the state. Second, there may be the believe that demolishing the term ‘dalit’ will ultimately end reservations provided to Dalits. Third, the word ‘dalit’ itself clearly implicates the higher castes as oppressors. Fourth, there may be a desire to regard oppressed people only as an abstract category. And finally, this may be a manifestation of the fear that Dalits threaten Brahminism by challenging the caste hierarchy; flattening the word ‘dalit’ will weaken the threat.

Not all non-Dalits believe in a positive correlation between the word and discrimination, and it is true that not all Dalits like to be called so. Many consider the word as having negative connotations, demoralising self-esteem and denigrating their dignity. It is possible for healthy debates over the use of the term ‘dalit’ and, if so desired, a new terminology can be given to what they represent today. What everybody should realise is that Dalits are the ones who should decide what nomenclature ought to be chosen to represent them.

The most important question remains—does the removal of the word from the constitution end discrimination against the category of people who are identified by it? Not only is it misleading to suggest that removing the word will end the unshakeable casteism that has gripped Nepali society for generations, it will be highly insulting and offensive to the Dalit community.

Read also: The old weight of caste (podcast available too)*

As social and political movements against untouchability and discrimination grew in numbers, the word acquired a new set of meanings. The word ‘dalit’ now connotates revolution rather than its pure literal meaning. It espouses the ideas of liberation, dignity, justice and equality. The world has given recognition to a common term for oppressed communities now organised to instigate change. The word has also caught the sentiments of many members of oppressed communities. It also stands as a reminder of how the so-called untouchables have been pushed to the bottom of society in the name of caste since Vedic times, and which is still prevalent in many forms.

A change in terminologies will create another level of confusion among Dalits. Such a pursuit will focus energy on the identification of a new word, while weakening a unified voice against discrimination. A vacuum will be created instead of the common sentiments and unity shared by different caste groups within Dalits and it will take years to fill such a void. We have proven examples from the USA and India, where terms referring to oppressed ones have changed—from colored to Negro to Black to African American in the US and from Dalit to Harijan back to Dalit then to Bahujan in India—what has remained consistent is the discrimination these people have faced. Changing terminologies might make sense for some justification, but it will not be able to annihilate the deeply rooted casteism from society. After all, the real change to be made is in our mentality, not in the word.

Photo caption: Doti, 2007 Hira Parki has been playing his drum outside the Shaileshwori temple since he was ten years old. But he had not entered the temple even after sixty-four years of doing this. Even when Dalit activists fought and won the right to enter the temple, he was too afraid to enter. When activists dragged him in, he screamed fearing death and passed out.