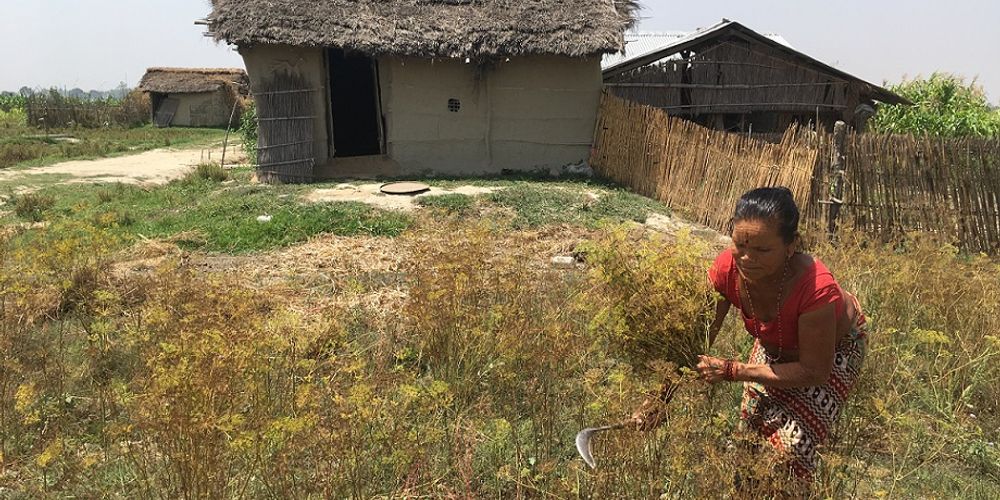 Phulbari Village, Bardia, consists of 40 houses on either side of a small dirt path in the middle of rice fields, several kilometers from the nearby bazaar of Rajapur. The houses lack electricity and running water and are mostly made out of mud and wattle, with thatch roofs. Until 17 years ago, the residents of Phulbari were slaves known as kamaiyas. Next month many of them will take part for the first time in elections to choose the mayor and deputy mayor for Rajapur Municipality, into which their village was recently incorporated, as well as ward representatives.

Nearly all adults The Record spoke with in Phulbari Village said they plan to vote, even if they have not yet decided on a candidate. The local elections are being held for the first time since 1997, and the village, like others around the country, has been administered by centrally appointed bureaucrats since 2002. Mina Tharu, 35, the president of the local women’s savings and credit group, says that the community will vote as a bloc after deciding on which candidate is most likely to bring projects to the village.

Bhagiram Tharu, 37, says, “If the leaders come, first we will ask for a road. Then we’ll say, ‘Build us a [water] pipe.’ After that, we’ll ask for electricity. But so far no leaders have come. How do we make demands?”

The kamaiya system of slavery, or bonded labor, was practiced legally in Nepal until 2000. Under the system, kamaiyas—a term derived from the Tharu language word for “worker”—worked in the fields and households of their landlords in exchange for clothing and food, but no cash payment. They often worked to pay off debts accrued over decades or generations, which ballooned with compounding interest. Kamaiyas were Tharu, the marginalized ethnic group indigenous to the Terai that forms approximately half the population of Bardia District. Although wealthier Tharu families also kept kamaiyas, conditions were worst for those working for high-caste landlords who migrated from the hills, according to research by the University of Toronto professor Katherine Rankin.

“It was like they had bought us. We couldn’t go anywhere, and we had to do whatever the malik said. If your child fell ill, you couldn’t leave to get treatment,” said Bhagiram Tharu.

In the monsoon of 2000, after extensive protests by Tharu activists throughout the western Terai and in Kathmandu, the government declared an end to the kamaiya system. The prohibition became law a year later when, under the administration of Sher Bahadur Deuba, the Bonded Labour (Prohibition) Act 2058 was passed. Over 30,000 kamaiyas had been freed, nearly half of them from Bardia District. Many were kicked out of their homes by their landlords without any alternative source of livelihood.

To address the problem, the government announced a “rehabilitation program” for freed kamaiyas. Although activists demanded the government provide 10 kattha (0.34 hectares) of land per household—an amount deemed sufficient for subsistence-level farming—the government agreed to provide a maximum of five katthas per kamaiya household or less, depending on the economic status of the household and the land’s location and condition.

However, implementation was patchy. Some households received the promised amount, while others received less. According the Tharu-run NGO Backward Society Education (BASE), 4,000 registered freed kamaiyas have yet to receive any land.

In Phulbari, households received only 1.5 kattha (an area approximately 22m by 22m) each. Khidiya Tharu, 60, who raised five children on her own after her husband, a kamaiya, ran away to India, says her twelve-member household cannot live off of the 1.5 kattha. Instead, her sons and daughters-in-law work as daily wage laborers in the bazaar, commuting two hours each day by foot.

Bhaskar Gautam, a Kathmandu-based political scientist who was involved with the kamaiya emancipation movement, says that implementation of the land distribution program was inconsistent partly because unoccupied land suitable for agriculture was not available in some areas. The government was reluctant to confiscate land from landlords, even when in excess of the land ceilings prescribed by national laws. Due to scarcity of quality land, many freed kamaiyas ended up receiving unfertile land or land in floodplains.

Lack of systematic data collection has also inhibited the rehabilitation program. Thousands of freed kamaiyas were never registered, according to BASE.

In nearby Sangarshanagar (literally, “Struggleville”), a settlement of freed kamaiyas and other landless people, Binti Ram Chaudhary, 60, is one of many unregistered ex-kamaiyas. He says that making the journey to Gulariya, the district headquarters where he needed to register, was difficult at the time of emancipation. The Maoist insurgency was going on, and the Army and police often harassed Tharus, especially when they were found traveling away from home, because they were seen as potential Maoists.

Gaya Prasad Chaudhary, 38, whose father once worked as a kamaiya, says that in his view, the government has intentionally withheld support to kamaiyas. “Freed kamaiyas remain slaves to this day,” he says. “In the same way that a landlord prevented kamaiyas from gaining property and moving ahead, the government also gives just enough so they won’t die, but not enough to let them become fat.”

Krishni Tharu, 40, takes a more optimistic view of the nature of the state. She is running for deputy mayor of Rajapur Municpality with the United Marxist-Leninist (UML) Party, and wants to help freed kamaiyas who have been left out of the rehabilitation program.

The issue is one close to her heart—she came from a kamaiya family and worked as a kamlari (female indentured servant) from age seven to fifteen. Her masters treated her miserably, she says, feeding her only leftovers and beating her routinely. After marrying a kamaiya man, she became involved in organizing protests in the lead-up to emancipation. After learning to read and write through night classes, Krishni Tharu joined party politics only recently.

“The state has done some things for us, but there is much left to be done,” she says. If she wins the election, she says she will help landless ex-kamaiyas acquire land and unregistered ex-kamaiyas get registered. She also intends to ensure other parts of the rehabilitation program are implemented, such as a provision for wood for house construction, and free access to education for kamaiyas’ children.

“The state’s policy is that education should be free until class eight. But in practice, there are many fees. Electricity fees, furniture fees, drinking water fees, registration fees, examination fees,” she explains.

Back in Phulbari, residents have heard of Krishni Tharu and many are guardedly optimistic. Khidiya Tharu says she might vote for Krishni.

But others, such as Bhagiram Tharu, are cynical. “Politicians say they’ll give you this and that during the election time to please you, but afterwards they don’t give you anything . . . after they get the votes they put their feet up and just sit around.”

But when asked if he thought the upcoming elections would be different from previous elections, since they are for local offices rather than politicians based in Kathmandu, Bhagiram allowed that this is positive. “If they’re close by that’s good. It’s easier to make demands. But politicians who go to Kathmandu don’t come back. So if they are close by that’s better.”

An earlier version of this piece misstated that Sher Bahadur Deuba was prime minister in 2000 when the government declared an end to the kamaiya system. Deuba became prime minister only in 2001, but was in office when the prohibition became law through the Bonded Labour (Prohibition) Act 2058.