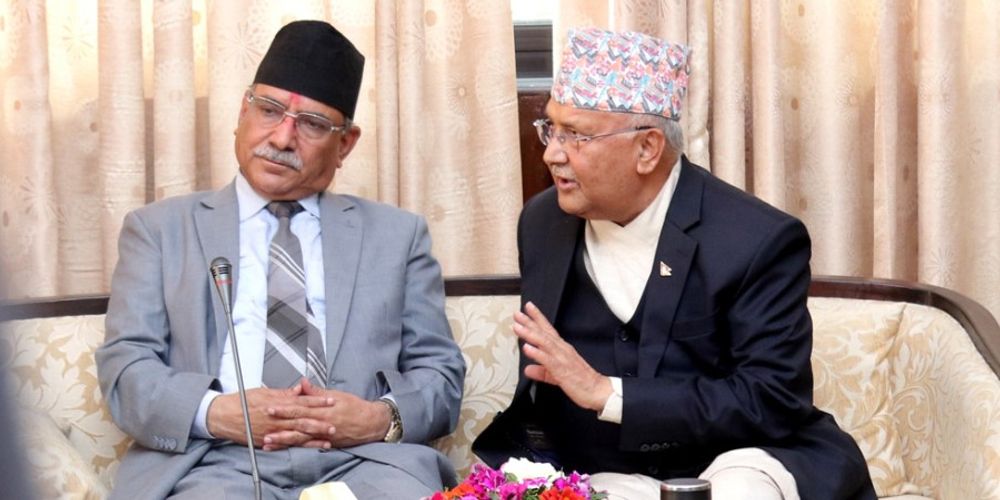 Imagine a situation where two power hungry leaders without an ounce of integrity decide to merge their party through a shady power-sharing deal. After some time has passed, one of them alleges the other of not honouring the ‘gentlemen’s agreement.’ They cannot part ways, however, as both need the other for political survival. What follows is an endless saga of the Game of Thrones, with many denouement-like moments but no real conclusion. This scenario more or less sums up the ongoing crisis within the Nepal Communist Party (NCP).

NCP was born out of a long, drawn-out merger between the erstwhile Communist Party Nepal Unified Marxist-Leninist (CPN-UML) and the Communist Party of Nepal (Maoist) in 2018 after voters overwhelmingly approved the proposed merger which included a pitch for political stability in the federal and provincial elections. The merger had, therefore, raised hopes in the general public that Nepali politics was turning a new leaf.

Political instability characterised by frequent party splits and changes in government has been the hallmark of Nepali politics since the restoration of democracy in 1990. Fed up with the instability, widespread corruption, and bad governance, the public was desperately looking for a strong government which could bring stability and steer the country towards peace, economic growth, and prosperity. The alliance between the two major communist parties of Nepal gave the public hope that, finally, the political establishment could be entrusted with these responsibilities. The mandate was historic; the party won 174 out of 275 seats in the federal parliament.

But since then, the alliance has been in a state of perennial crisis. The main source of this crisis is the power tussle between the two party chairmen, KP Sharma Oli and Pushpa Kamal Dahal (Prachanda). While the incumbent Prime Minister Oli wants to remain at the helm of both the party and the government, Dahal has maintained that he should give up at least one of the two positions as per the pre-merger agreement between the two to rotate the helm of the party and the government.

The tussle between the two chairmen has further escalated in recent weeks with Dahal pressuring Oli to give up one of the two positions or else face a vote of no-confidence in both the party and the House. Presenting a 19-page political document at a meeting of the party’s central secretariat on November 18, Dahal accused Oli of failing to deliver on the poll promises or handle the Covid crisis that has already claimed 1,298 lives and infected 216,965 individuals.

Just days before the secretariat meeting, Dahal wrote a five-page letter suggesting that the PM should admit his failure in running the government and resign. Oli’s rebuttal was to call Dahal’s allegations baseless in a letter published in the government-run Gorkhapatra daily.

In the ongoing tussle, Dahal has the backing of NCP heavyweights like Madhav Kumar Nepal, Jhal Nath Khanal, and Bam Dev Gautam. The next meeting of the party’s secretariat has been postponed to November 28, while the meetings of the standing and central committees are scheduled for December 3 and 10 respectively, after Oli demanded 10 additional days to prepare a rebuttal against Dahal’s allegations. Regardless of what Oli presents in his defence, Dahal and the other factions appear determined to oust Oli.

Oli, on the other hand, is in no mood to budge. If the current crisis persists, Oli will be left with two hard choices — either lose at least one or both positions, or split the party, dissolve the parliament and cling to power until the next elections as some of his aides have suggested.

Perhaps having realised that such a step could backfire, Oli appears to be doing everything right now to find a more amicable solution. He has mobilised his trusted friends, including President Bidya Devi Bhandari and Bishnu Paudel to broker a new deal with Dahal. But the efforts have proven futile, so much so that several leaders have already publicly acknowledged that a split is inevitable if the two fail to find a point of compromise.

There are few signs that Dahal, the former leader of a guerilla movement, will turn around so easily unless Oli offers something substantive on the table. For Dahal, the ongoing tussle is increasingly becoming a matter of his own political survival. As someone who prides himself as the kingmaker of Nepali politics, Dahal fears that the Oli’s hold on both the party and the government until the next round of elections could further weaken his faction and push him into oblivion. Meanwhile, Oli wants to remain in power until then at all costs. He also cannot give up the position of party chair given the internal party dynamics and pressure from his close aides.

How are things going to unfold in the coming days? Will the two chairmen arrive at some kind of settlement like before? Or will they split the party? It’s too early to get answers to these questions, but one thing is certain: both Oli and Dahal are playing a dangerous game which is not in the best interest of their party and is unlikely to benefit them individually. It is most likely that a third person would emerge as a winner if they continue with what is a zero sum game between the two.

In all this political squabbling and power-grabbing, it is perhaps the Nepali voters who will emerge as the biggest losers. Having taken the leaders’ promises at face value and entrusted them with a historic mandate, they may only have more disappointment to face in the days ahead.