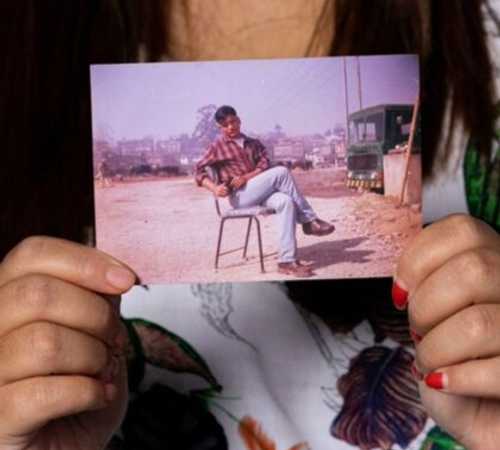 On a cold December day in 2001, 18-year-old Bhagiram Chaudhari’s life changed forever. His brother and sister-in-law -- Chaitelal Chaudhari and Sita Janaki Chaudhari -- were taken into custody by the then Royal Nepal Army for their alleged involvement in the Maoist movement. He never saw them again.

Growing up in Bardiya's Belbhar, Bhagiram was just a young bright-eyed boy who wanted justice for all, inspired by his brother who was involved in the Maoist movement. But his brother and sister-in-law’s arrest and their subsequent disappearance set his life on a course where he would above all be fighting for justice for his own and his family. Twenty years later, their whereabouts are still unknown.

Since this cataclysmic event in young Bhagiram’s life, much has changed in Nepali political sphere. The civil conflict ended in 2006 with the signing of the Comprehensive Peace Agreement and the former Maoist rebels joined mainstream politics. The Maoist party of yore does not exist anymore, with most commanders and leaders going on to become parliamentarians and ministers while thrice leading democratically elected governments. The Maoists are now part of a majority government, although fissures have appeared in the ruling party.

But for Bhagiram and thousands of other conflict victims like him, little has changed. Ever since their loved ones were forcefully disappeared or extrajudicially killed, they’ve been trapped in an eternal circle of rallying, lobbying, waiting, and being fed promises with no actual delivery of justice in sight.

Bhagiram has now spent more than half of his life pursuing a semblance of justice for his brother and sister-in-law. Much of Nepal’s transitional justice process has been political posturing -- sometimes to soothe the victims’ protests, other times to assure the international community that justice is being delivered. More often, victims have been employed as political bargaining chips.

Bhagiram has gotten used to empty gestures. Some renew his hope but then nothing substantial has ever come from any of the so-called “landmark decisions”. On Thursday, February 4, the government of KP Sharma Oli extended the terms of the two transitional justice commissions via ordinance, just five days before their terms would expire. The commissions had only just started to work, with the Commission of Investigation on Enforced Disappeared Commission (CIEDP), on January 28, beginning the distribution of victim identity cards to the kin of the people disappeared during the Maoist insurgency. With this card, conflict victims are now eligible for reparation packages and other subsidies as per the transitional justice act.

Bhaigram reported mixed feelings when he received his card. He says he could neither reject it -- as it was one of the demands of conflict victims -- nor was he happy to acquire it.

"Even though this card makes us eligible for packages and subsidies, right now, it is merely a card,” Bhagiram told The Record. “I only accepted it to be recognised as one of the victims.”

The CIEDP began distributing the cards just 10 days ahead of the expiry of its tenure, beginning from Bardiya, the district most affected during the 1996-2006 conflict period. Of the 2,506 unlawful disappearance cases registered with the CIEDP, 255 are from Bardiya, according to data from the commission. But the commission was only able to distribute cards to 21 individuals from five households. Some members of disappeared families rejected the card outright. The CIEDP hasn’t specified the kinds of reparations and subsidies that the cardholders are entitled to and the card does not even have the name of the disappeared person; all it mentions is the relationship of the card holder to the disappeared person, said Ram Kumar Bhandari, whose father, Tej Bahadur Bhandari, was disappeared by the state security forces on December 31, 2001.

“It’s ridiculous that the identity card does not include the identity of the person who was disappeared. Anyone can make these cards. This is an insult to the victim community,” said Bhandari.

In the past twenty years, Bhandari has brought his and others’ cases to the notice of the National Human Rights Commission, the national rights watchdog, and the UN Human Rights Council. But justice has been elusive. The transitional justice process, which formally started in 2015, was the only hope for conflict victims, but it has always been influenced by political interests, said Bhandari.

A history of neglect

The 2006 Comprehensive Peace Accord, signed on behalf of the Nepal government by then prime minister Girija Prasad Koirala and by Pushpa Kamal Dahal ‘Prachanda’ on behalf of the Maoists, makes a clear commitment to ensuring justice for the families of the disappeared. Clause 5.2.3 of the Accord states, “Both sides agree to make public within 60 days of signing of the agreement information about the real name, caste and address of the people 'disappeared' or killed during war and to inform the family about it.”

It took eight years of protest and national and international lobbying before Nepal even finalised the Enforced Disappearances Enquiry, Truth and Reconciliation Commission Act 2014. The act was widely condemned by both victims and human rights activists for provisions of mass amnesty even for serious violations of human rights like disappearance and crimes against humanity. That same year, the Supreme Court struck down half a dozen provisions in the act and instructed the government to amend the act in line with international principles and practices of transitional justice.

Despite the court order, the government formed two transitional justice bodies -- Truth and Reconciliation Commission (TRC) and the CIEDP -- in February 2015 under the same act. Conflict victims were left with no option but to engage with the commissions, although they did decide to engage critically. Right activists, meanwhile, continued to boycott the commissions, delaying the registration of complaints.

Read also : The NHRC finally lists rights abusers publicly, but will the perpetrators ever be brought to book?

The TRC, which is responsible for looking into cases of murder, abduction, torture, sexual assault, looting, arson, forceful eviction, and inhuman treatment, collected over 63,000 complaints, but verified less than 10,000 complaints until its tenure ended for the second time in 2019. The CIEDP had verified over 1,700 complaints within that time.

Constituted under a faulty law, the commissions never received the support they needed, especially from the government and human rights activists. Surya Kiran Gurung, then chair of the TRC, had threatened to resign in 2016 itself, unless the transitional justice act was amended in line with the Supreme Court’s instructions. The act was eventually amended, but only to restructure the commissions themselves. Conflict victims’ other demands and the court’s decision were never implemented. Gurung, along with member Lila Udasi Khanal, resigned accordingly in February 2019.

The two commissions were then completely reconstituted with all new members. Ganesh Datta Bhatta was appointed chair of the TRC while Yubaraj Subedi was appointed to head the CIEDP. The act, however, remained much the same.

Maneuvering by political actors wasn’t the only thing holding back transitional justice in the country. A host of stakeholders, including the international community, victims, and rights activists, had become enmeshed in the transitional justice process. As all external actors had their own interests at heart, victims too began to get co-opted by various actors, splitting and weakening the justice movement.

The Conflict Victims Common Platform, formed in 2014 as an umbrella organisation of victims, took an official position in favour of the formation of a ‘high-level mechanism’, comprising political representatives, to oversee the transitional justice process. The idea was first floated in 2018 by Sushil Pyakurel, then advisor to the president, analyst Geja Sharma Wagle and current advisor to the president, Tika Dhakal. They proposed that the high-level mechanism would formulate national policies on truth seeking, reparation and reconciliation while taking what they called a ‘holistic approach’ instead of appeals for retributive justice.

Read also: Justice-seeking in the time of covid

A group of victims and rights advocates, however, opposed the high level mechanism as a ploy to whitewash crimes committed during the conflict period. The Conflict Victims’ National Alliance for Justice (CVNAJ) thus broke away  from the Conflict Victims’ Common Platform under the leadership of Gita Rasaili. The split in the once-united victims’ movement served to only weaken their calls for justice.

No justice in sight

So far, the two commissions have only completed preliminary investigations, which include taking statements and collecting documents and other physical evidence. Both the commissions, however, argue that they are hamstrung by the lack of a proper legal mandate to investigate complaints.

“The lack of necessary legal provisions is a major hurdle for the commission to carry out investigations into complaints and recommend legal action against perpetrators,” said Gangadhar Adhikari, one of the CIEDP’s five commissioners and its spokesperson.

Read also: No justice for conflict victims in a state that operates with unbridled impunity

“As independent commissioners, we can’t directly urge the government and they [government officials] don’t consult us either about how to move ahead,” said Prachanda Raj Pradhan, one of the five commissioners at the TRC.

Out of more than 63,000 cases filed at the TRC, the commission has forwarded 10,000 cases to regional offices. Of those, 3,700 have been sent back and the TRC has looked into 400 files, according to Pradhan.

“Among those cases we studied, some have been recommended for detailed investigation while some have been put on hold as they were beyond our jurisdiction,” said Pradhan.

Pradhan admitted that the commissions had failed to show any substantive progress in a year since beginning work, but he had an excuse ready.

“The pandemic hit the country just as we were preparing to establish four regional offices,” said Pradhan, “We were also confined indoors due to Covid-19 so we couldn’t make expected progress.”

Conflict victims have waited patiently for 14 years. Their voices have been used and abused by many who are not just limited to political actors; many in civil society have also employed conflict victims in pursuit of their own interests.

The terms of the two commissions might have been extended but that doesn’t mean much to conflict victims like Chaudhary and Bhandari. They know that their pursuit of justice will continue to be a long, uphill battle.

“We know that this is a long fight,” said Bhandari. “And it is on.”