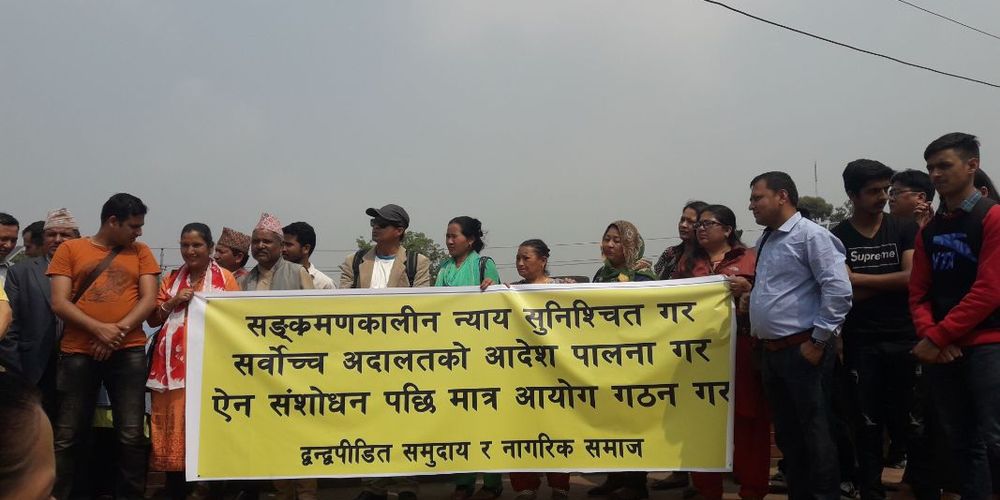 Four years ago, the Supreme Court had passed a historic verdict that denied amnesty to  perpetrators of gross human rights violations committed during the decade-long armed conflict. In a move that could signal the demise of the transitional justice process, Nepal government has called for a “review” of the verdict.

“The government is seeking a review of the SC verdict as it specifies legal provisions as well as procedural approaches applicable to the ongoing transitional justice process,” said human rights lawyer Om Prakash Aryal. “So effectively, what they want to do is destroy the very foundation of the process to protect political leaders from being prosecuted for their involvement in the crimes.”

A review petition was registered four years ago to challenge the ruling made by the Supreme Court on the Transitional Justice Act. At the behest of the current government, the Supreme Court has set a hearing on the petition on May 16, 2019.

The Supreme Court decision had come after a a group of 234 conflict victims, one of the largest number of writ petitioners appearing on a single writ in Nepal’s legal history, had filed a joint writ at Supreme Court demanding a revision of the Transitional Justice Act.  In response, the Court had struck down half a dozen ‘problematic’ provisions and as many directive orders and interpretations of the Act.

The verdict had thrown out the amnesty provision available to perpetrators. It had also curtailed powers of members of the Truth and Reconciliation Commission (TRC) and the Commission of Investigation on Enforced Disappeared Persons (CIEDP) to grant amnesty based on their discretion. It had explicitly stated that the transitional justice process needed to be victim-centric, and it empowered the Attorney General to decide on recommendations made by the Commissions.

“The government is seeking a review of the SC verdict as it specifies legal provisions as well as procedural approaches applicable to the ongoing transitional justice process,” said human rights lawyer Om Prakash Aryal. “So effectively, what they want to do is destroy the very foundation of the process to protect political leaders from being prosecuted for their involvement in the crimes.”

If the Court is to reverse its ruling on May 16, the possibility of conflict victims getting justice will be greatly reduced. Reversal of the verdict will reinstate the amnesty provision of the Transitional Justice Act, and open an avenue for mass amnesty to perpetrators of serious crimes committed during the conflict. It will also mean that the Ministry of Law, Justice and Parliamentary Affairs will have the final say on recommendations made by the transitional justice commissions for action against perpetrators, which will increase the chances of selective omission of certain recommendations.

Why is the government concerned with the Supreme Court verdict now?

The tenures of the TRC and CIEDP ended in February 2019.  While 65,000 complaints from conflict victims were registered in four years, the commissions were unable to complete investigations for even a single case. Conflict victims and members of civil society demanded  reconstitution of the commissions, and the government initiated a process to appoint new commissioners.

When the search for appointing new commissioners began, victims and some members of the human rights community called for adherence to the Supreme Court verdict. Some international actors, too, asserted that adherence to the verdict was a minimum in establishing credibility. In January, nine foreign embassies in Kathmandu issued a joint statement urging the Nepal government to clarify and make public its plan to take the transitional justice process further. On April 12, 2019, five UN special rapporteurs wrote a joint letter to Nepal government, citing the SC rulings as a foundational to the transitional justice process.

“We are worried because the timing and intention of the government in reviving the review petition is suspect and likely intended to reverse the verdict. The Act, without the amendments specified by the verdict, will not guarantee justice for victims no matter who the commissioners are. This case is a test of integrity for individuals, institutions and country at large,” said Suman Adhikari, lead petitioner of the case.

It appears as though transitional justice will take a huge hit  for the sake of political expediency. After forming a political alliance, the Maoist and UML coalition government has been taking every action possible in order to ensure that the transitional process ends without any criminal prosecutions.

In the past, the government had vowed to amend the Transitional Justice Act according to the SC verdict as well as international obligations.

“But the government has made an attempt to reverse the verdict instead of amending the Act. It means the government does not want to conclude the last remaining task of the peace process. The government wants to steer the process towards mass amnesty,” said human rights lawyer Aryal.

“The SC verdict was the basis of our fight and our hope for justice,” said Gita Rasaili, President of Conflict Victim National Alliance. “I don’t know what we will do if the same Court robs us of our right to justice.”