Lack of political will stalls investigations 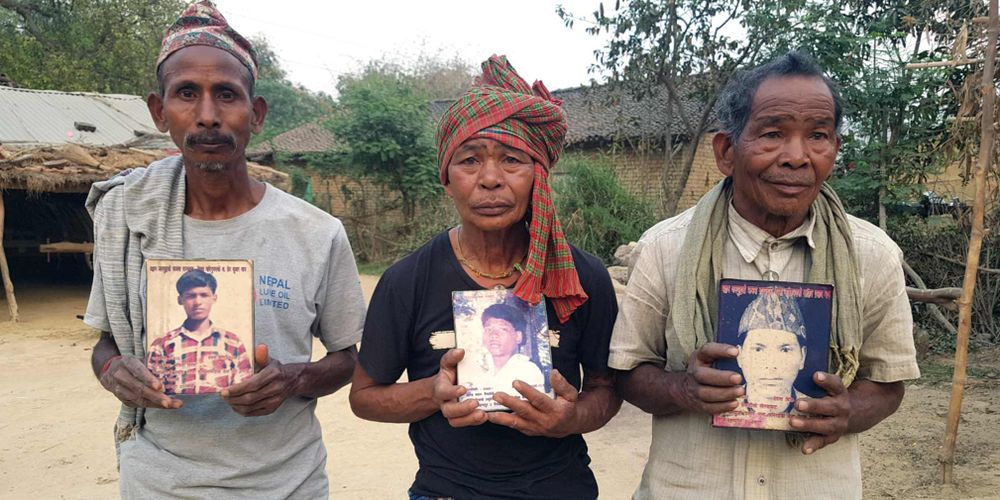 Buddhiram Chauhary’s eyes brimmed with tears as he stared at his daughter’s photo. “I cannot sit up straight for long time,” he said, as tears rolled down his cheeks. He leaned on his chair and wiped his eyes. “Sixteen years have passed waiting for her to come home.”

His daughter, a twenty-three-year-old Sita Kumari Chaudhary, was in seventh grade in Mohanpur village, Bardiya district, when she was disappeared. She was exceptional. No other girl of her age in Mohanpur village was unmarried and going to school. The first girl there to take a job, Sita used to teach seniors in the village as the social mobilizer of a Tharu-run NGO called Backward Society Education.

“She wanted to stand on her own feet,” recalled Buddhiram.

On the night of August 13, 2002, a Nepal Army patrol raided his house for no apparent reason. The soldiers pinned down all six family members against their beds. They dragged Sita out and asked her to get dressed, but they did not allow her to wear all her clothes, telling her that she was not going to a party. Petrified, family members silently watched her being taken. Sita reassured her family that she would return by morning.

The next day, the Chaudhary family heard on the radio that Sita was killed in crossfire.

“The army planted a blatant lie. But what we could do?” he said.

Buddhiram could not gather the courage to visit the barrack to inquire about his daughter. A state of emergency had been declared by the ­­­­­Sher Bahadur Deuba government, and everyone had to be home by 5 pm. Security patrol had threatened to shoot anyone seen outside during curfew hours. They could arrest and disappear anyone they wanted. Posing as an ox-trader, Buddhiram went up to Rambapur barrack to look for Sita’s body.

“Sixteen years have passed waiting for her to come home.”

A kilometre north of Mohanpur is Machhagadhi chowk, where a resident told him that they heard a woman howling in pain in the middle of the night. As the cries subsided, they heard a vehicle pull over, soldiers speaking offensive language, and the thud of a heavy object landing on the vehicle before it drove away. Locals told him that they did not leave their beds because it was full moon night and they feared being seen by soldiers if they tried to sneak a look.

Two days after her arrest, Sita’s mother found blood-soaked inner clothes in their cowshed. Someone had left them in the night. “I do not know why they wanted to return her clothes. Khai! Army soldiers might have raped her or butchered her,” Buddhiram said.

Three other villagers who were also arrested that night also never returned.

Sita is just one of the 239 disappeared persons in Bardiya, the district with the highest recorded number of disappeared. According to the Commission of Investigation on Enforced Disappeared Persons (CIEDP), over 70 percent of those disappeared in the district are Tharu.

According to the Commission of Investigation on Enforced Disappeared Persons (CIEDP), over 70 percent of those disappeared in Bardia are Tharu.

The UN Office of the High Commissioner for Human Rights (OHCHR) investigated 156 cases of disappearance in Bardiya district and prepared a report in 2008. According to the report “members of the Tharu indigenous group, who make up 52% of the population in Bardiya District, account for over 85% (135) of the persons disappeared by State authorities in cases documented by OHCHR. Among the victims were 123 men (including 102 Tharus), 12 women and 21 children.” Bhagiram Chaudhary, president of Conflict Victims’ Committee (CVC), an organisation run by conflict victims, said that the Maoist party “lured the impoverished Tharu community into what they called a ‘People’s War’ with the political slogan of Tharu liberation and poverty alleviation.” According to Chaudhary, above 80 percent fighters of the Maoist’s People’s Liberation Army in the district were believed to be Tharu youths, and one of the main reasons for security forces to target Tharus.

As an agrarian community, Tharus conventionally live in close proximity. Security forces arrested Tharu people en masse, and detained them and tortured them to extract information as well as confessions of their affiliation with the rebels. Many of those detained never returned.

“There was a time when security forces would arrest every teenager in the village. It prompted many poor Tharu youths to join the insurgency,” said Chaudhary, “They wanted to fight back instead of dying in the hands of security forces for no reason.”

The rebels did it too

On September 3, 2002, Maoists surrounded the house of veterinarian technician, Ram Narayan Tharu, dragged him out of bed, and beat him until he fell unconscious.

“He was just 32. We had two children, the youngest one was four years old at the time,” said Asha Rani Tharu, his wife. “We were already in bed when they arrived. The broke into the house, dragged him out and locked us inside. They beat him for two hours and left him to die in the courtyard.”

When the rebels left, her father-in-law knocked down the wall of the house and found his son soaked in blood. “I fell unconscious for a while and when I woke up, nobody came forward to take him to the hospital.” said Asha. “The Maoists had warned the villagers of consequences like his if they found anyone helping him.”

“I could not save him, but I am alive for the sake of the children. He made me promise that I take care of our children and educate them. I am struggling to survive.”

Her family disowned her without giving her any property. However, she refused to leave her house, where she has been living ever since.

“I have not been able to figure out why he was killed.”

As for her husband’s death, Asha is still tormented by what happened. “The Maoists told us that the party would come to explain his death, but nobody from there has visited so far. I have not been able to figure out why he was killed.” Asha Rani and her husband were the only ones in their village who were not affiliated with the Maoists.

At least 107 villagers in this Tharu settlement of 300 households are directly affected by the conflict—some were murdered, dozens of them tortured and mostly disappeared.

Considering the number of cases, the TRC forwarded a proposal to the government in March, for temporary bases in all 75 districts, as well as one investigation team for every 1,000 complaints. “If we are to complete the investigation within the extended mandate, the government will have to approve the proposal and provide us with necessary logistics and legal support immediately,” said Commissioner Shree Krishna Subedi.

There are legal issues to tackle for the commissions to function. The government has shown no willingness to draft the required bills and provide necessary resources. On January 2015, the Supreme Court struck down almost a dozen provisions of the Transitional Justice Act citing inconsistency with transitional justice norms and practices. The government still hasn’t amended the act.

In addition, the TRC still cannot look into incidents of torture. While the newly adopted Criminal Code of Nepal criminalises torture and enforced disappearances, they cannot be applied retrospectively. To register conflict-era cases, the duration within which these cases have to be reported will need to be relaxed. In the 2015 verdict, the Supreme Court also argued that such statute of limitations for serious rights violations would promote impunity.

Nepal government was prompted to table a torture bill when, in 2013, Nepal Army Colonel Kumar Lama was arrested in the UK on the charge of torture under universal jurisdiction. The government, then led by Maoists’ Baburam Bhattarai, took it as an attack on sovereignty. However, it prompted the government to draft a bill to criminalize torture, aiming to rescue Col Lama from the UK by claiming that torture would be prosecuted in Nepal. Nepal was supposed to criminalize torture and sign an Extradition Treaty or Mutual Legal Assistance Agreement with the UK to transfer the case to Nepal.

Lama was released in August 2016 due to insufficient evidence to ‘prove his crime beyond doubt’. Nepal’s parliament never passed the Bill to Control Torture, Inhuman, Brutal and Disrespectful Acts.

The Transitional Justice Act does not define disappearance clearly. As per the Act, any person detained, abducted or captured and held incommunicado is considered an act of disappearance. The Commissions have sought an amendment proposing only incidents of ‘continuous disappearance’ (where persons never returned) be considered for investigations.

Then there are incidents in which deaths in detention has been ascertained, but families and relatives never receive the bodies. The Commissions have forwarded complaints of death in detention to the TRC for further investigation. Since illegal detention and hostage taking can also be defined as kidnapping or torture, it is not clear which of the Commissions are supposed to deal with these cases.

Successive governments, whether led by Nepali Congress or the communist parties have stonewalled the commissions requests for resources.

Under the Transitional Justice Act the government must provide the Commissions with staff and budget, and they cannot hire staff on their own without government consent.

“Every new government assures us of all kinds of support, which never materializes.” said TRC Chair Surya Kiran Gurung. “We hope it will different this time.”

The feature image for this article shows (from left to right) Dhaniram Tharu, 66, Hariram Tharu, 71,  Surjan Tharu, 72, holding the photos of their sons Kaliya Ram Tharu, 19, Shiva Prasad Tharu, 20, and Prem Kumar Tharu, 20. The three youths were killing rats in the rice fields in Baishahi village, Bardia, when a joint command force surrounded the village and detained them. They were last seen in Guleriya district police office.