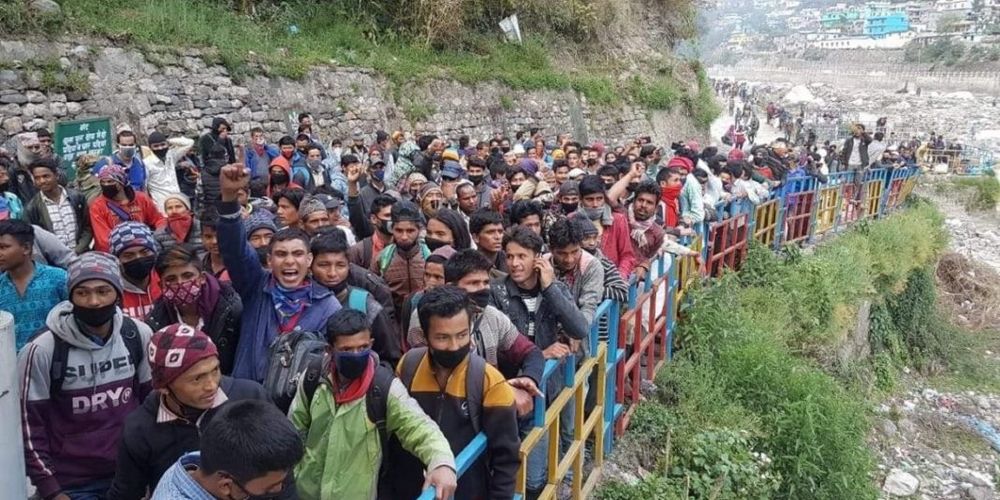 Uttam Bahadur Bohara has been pensive ever since he arrived at the India-Nepal border in Darchula five days ago. Just across the Mahakali River lies his country. Bohara has been brooding over his government, which has failed to see his plight or hear his plea. He has been brooding over how the same government that sent a chartered flight to bring back its citizens from Wuhan just a month ago has forgotten about him and his kind. He has been brooding over whether the lives of Nepalis working in India are somehow less valuable than that of those working in other countries. And he has been thinking, desperately and constantly, about his children back home in Purchaudi while waiting, in what has become a brutal test of resilience for hundreds of seasonal migrants like him, to be granted permission to cross the border.

“My children are worried about my wellbeing and keep calling me. I am equally worried about them. The government is not allowing us to enter. We are stranded here, fighting for our lives,” said Bohara, the sole earner in his family who was working in Didihat, Uttrakhand, before Nepal announced a nationwide lockdown on 24 March. Like many other migrant labourers from Nepal, he made the journey to the border on foot in hopes of entering his country.

In what is an unmistakable tone of resentment, he added, “How can the government help charter planes for foreign nationals in Nepal to send them to their respective countries, but prevent us from walking across the bridge to enter our homeland?”

Ever since the national lockdown in Nepal, which began 6 am on 24 March, thousands of Nepalis fleeing the Covid19 outbreak and an increasingly uncertain future in India have been returning home. While most of them have managed to get in through the porous border, hundreds, like Bohara, are still stuck at various border points with India.

On Tuesday, deputy prime minister and defence minister Ishwor Pokhrel told the media that the government had no intention of opening the border until the lockdown comes to an end on 7 April. According to his statement, Nepal and India would take care of each other’s citizens stuck on either side of the border.

But Bohara, who had to rush back home without receiving pay from his employer, feels that the government is pushing those like him into further risk by abandoning them at the border.

"We have not been paid wages for the past 4-5 months by our contractors. Our families are waiting at home, helpless, and the government is not allowing us in,” he complained.

About 100 workers from the Purchaudi municipality in Darchula returned empty handed after their contractors told them to go home due to the lockdown. It took two days for Bohora, accompanied by other Nepalis, to walk from Didihat to Darchula. Both nights, they slept on the banks of the Mahakali River.

With what was initially a week-long lockdown now being extended until the first week of April, the Indian government has made provisions to accommodate those stranded in school buildings on the other side of the border. For now, the bridge over Mahakali continues to stay shut.

But Padam Dhami, who also arrived from Dedihat, was expecting something else. He had heard that the suspension bridge connecting the two countries was being opened occasionally, so that migrants stuck on both sides could cross over. This had given him and many others the hope and courage to walk the entire way. According to him, while the Indian officials opened the gates for them to exit, there had been no initiative by the Nepali government to rescue them.

“We are completely exhausted, have barely eaten or slept properly this entire time,” Dhami said.

There are currently about 500 Nepali citizens from different districts in Nepal stuck across the border from Darchula in India’s Pithaouragarh municipality. In the last week, they have been arriving from different parts of India, where most have worked as low-wage menial labourers. Trapped and prohibited from entering Nepal when they are just a few-minutes-walk away, their patience is wearing thin. Many have started to congregate to chant slogans demanding they be allowed to enter their own country.

Local authorities in Darchula, however, have no intention of allowing them to enter. According to Tek Singh Kunwar, Darchula’s deputy chief district officer, all of them will have to wait until the lockdown is over.

Echoing Pokhrel's words and underplaying the plight of the migrant labourers, Kunwar said, “There were some problems in the beginning but now everything is sorted and they are safe.”

The reduction of quotas in civil service represents yet another backlash against inclusion.