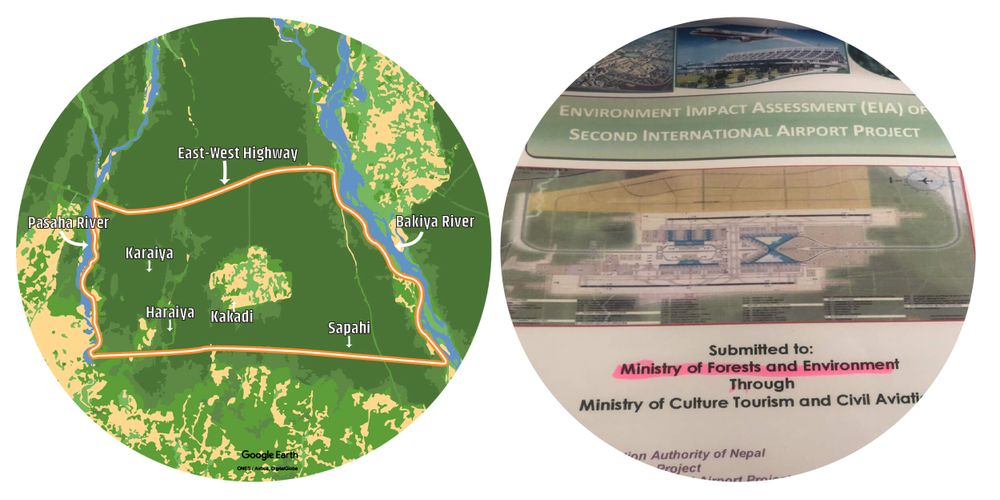 The Ministry of Forest and Environment (MoFE) approved the Environmental Impact Assessment (EIA) for the Second International Airport (SIA) in May 2018. SIA (Nijgadh International Airport, as it is frequently referred to as) will be constructed in Dhumberwana, Nijgadh of Bara district, which is 175 kilometers away from Kathmandu and 45 kilometers away from Birgunj. The proposed airport is supposed to deal with the rapidly increasing air traffic demand, which is expected to reach 20 million by 2021.

This is a massive project which will be constructed on 8,045 hectares of land with the total cost estimated to be about NRs. 656 billion. According to the government, the advantages of this project are manifold: it will be a major infrastructure project outside the capital, a good transit point between the east and the west, a response to growing aviation traffic in the country, and it will enable direct long-haul connectivity to countries in North America, Europe, and Australia. However, this mega project has also come under huge scrutiny due to the environmental costs associated with it. The proposed airport is to be built on forest land which means that around 2.4 million trees will have to be cleared.

According to the Detailed Feasibility Study (DFS), the construction of the airport will be done in 3 phases. The first phase will be completed in 10 years, the second phase in 5 years, and the third phase in 25 years.

In the first phase, Ministry of Culture, Tourism and Civil Aviation has requested the Ministry of Forests and Environment to issue clearance of around 2,556 ha of forest, which means cutting down around 770,300 trees.

However, EIA suggests that the most feasible option for the first phase is to use 1,641 ha of forest land. This contradiction has raised concern amongst many who are following the project closely.

To analyze the environmental impact of this project, it is important to understand the geography and the biological features of the proposed site. Firstly, it is important to note that in the 1990s, an ‘Operational Forest Management Plan’ was implemented on the proposed site to ensure proper biodiversity conservation. Operational Forest Management Plan is a type of management plan that is based on a forest inventory and specifies management objectives, activities to be undertaken and rules on forest product utilization. There are predominantly three types of natural forests; Sal, Terai-Hardwood, and Khair-Sissoo on the proposed site. Similarly, the EIA report has identified that the forest is home to 333 plant species, 23 species of mammals, 31 species of birds, and 10 species of reptiles. The forest of Bara district also has 22 endangered plant species. Some of the rare species found in this region include Asian Elephants, Bengal Tigers, Hyena, and Giant Hornbill. Environmentalists have claimed that the proposed site is also a migration corridor for the Asian Elephants. Migration is important for elephants to avoid inbreeding. Inbreeding means mating of organisms which have close genetic makeup. This results in homozygosity which negatively impacts the ability of offspring to survive and reproduce.

Forests and Oceans are the two biggest naturally occurring carbon sinks. They capture and store atmospheric carbon dioxide through the process of carbon sequestration. The captured carbon from the atmosphere is stored in the plant biomass as well as in soils. Thus, cutting the lush forest of this region will significantly increase the carbon emission into the atmosphere.

The existing forest of the proposed site is the secondary succession which consists of primarily sapling and pole of secondary vegetation. A secondary succession forest is a forest that is followed by a natural or man-made disturbance such as forest fire or deforestation. In this case, deforestation was the main cause as all the indigenous trees in the area were cut during the Rana regime. Although the forest is a secondary succession forest, it is dense due to fertile soil conditions. Keshav Bhattarai, a current professor of geography at a university in USA conducted his research in this area. He writes in an article, “The proposed airport site of Nijgadh has higher water table (water close to the earth surface), which increases the chances of arsenic deposition at the downstream overtime as the air business increases. The biogeochemical cycle is very rapid in this area.”

According to the EIA report, a total of 754 samples were taken in 12 classified forest types covering about 7,587 ha to estimate losses. During the construction process, an estimated 586,001 numbers of trees over 30 cm dbh (Diameter at Breast Height), and 1,864,820 pole-size plants will be cleared.

The report estimates that the total value of the loss of forest timber products is around NRs. 69 billion as per the market value. The same report has also included a valuation of total economic loss as a result of deforestation.

The valuation which is estimated at around NRs. 231 billion, considers the loss of carbon sequestration, oxygen release, naturally occurring forest nutrients, and the loss of non-timber forest products. The report identifies forest loss, wildlife habitat destruction (especially endangered species), and loss of carbon sequestration as the major impacts associated with the construction and operation of the airport.

To address these environmental impacts, the EIA report proposes compensatory plantation at a 1:25 ratio. Batu Uprety, a former Chief of Climate Change Management Division in the Ministry of Environment points out to the mismatch in the cost-benefit analysis to the proposed solution, in his article in Spotlight. The compensatory plantation would mean plantation and management of around 61 million sapling which requires 38,294 ha of land, five times the size required for the proposed airport. The total cost for the plantation (including the cost of land) would be around NRs 13,980 million. However, EIA report only allocates NRs 2,670 million. This report also disregards the costs of additional resources required for monitoring, evaluating and auditing the proposed plantation. The total economic value of loss of forest area and its products, along with the total cost for plantation is around NRs. 252 billion (which includes forest clearance, compensation to land, compensatory plantation, and construction of 3 office buildings for DFO) which is one-third of the total project cost. Uprety was also critical of the EIA report in his article. He points out some instances of ‘copying and pasting’ in the report. Likewise, he has raised question about the lack of specification of adverse impacts of certain activities of the project. He claims that alternative analysis, an important part in any EIA report is technically poor in this case.

This project also ignores the Section 68 of the Forest Act (1993). The Forest Act clearly mentions that any type of forest area can be used by the government, if it satisfies 3 conditions: (i) the project must be a national priority; (ii) there are no alternative options to implement the project; (iii) the project shall not have any adverse effect on the forest and wildlife environment. However, EIA report suggests that only one out of these three conditions were taken into considerations for the project. The report doesn’t provide any detailed information about the alternative site and also clearly mentions ‘adverse effect’ to forest area. Bhattarai, in his article, identifies Murtiya and Simara as alternative sites. He claims that the forest condition in Murtiya is poor compared to Nijgadh which will lower the environmental impact. Likewise, in Simara, cutting only 70,000 trees would allow for the building of the airport.

Bhattarai, in his article, identifies Murtiya and Simara as alternative sites. He claims that the forest condition in Murtiya is poor compared to Nijgadh which will lower the environmental impact.

Yunish Ghimire  Ghimire is an environmentalist and a storyteller.