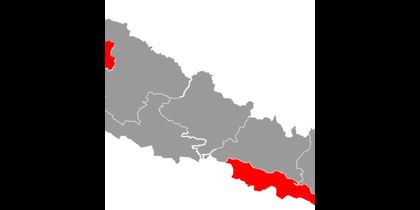 After KP Sharma Oli dissolved the Lower House of the federal parliament on December 20, rumours began to abound that he would do the same for all seven provincial assemblies. Some have even speculated that Oli might attempt to undo the federal structure by asking for a referendum on the issue.

In the face of growing political uncertainty, two provincial governments seem to be distinctly stable—at least on the surface. Province 2 was being governed by two parties -- Rastriya Janata Party and the Samajbadi Party -- that have since merged to form the Janata Samajbadi Party. In Sudurpaschim province, the same federal ruling party -- the Nepal Communist Party -- is in office but Oli’s party opponents, namely Pushpa Kamal Dahal and Madhav Kumar Nepal, seem to have solid control. The political quagmire at the national level seems to have undaunted these  governments.

As such, it was telling that the Oli faction targeted its early political activism towards these two provinces. Oli’s confidante Mahesh Basnet led an inopportune and rather awkward dhoti rally on January 10 in order to court Madhesis, among whom his faction appears to be weaker. And Oli’s first major political rally since the parliamentary dissolution was in Sudurpaschim.

These events show how an unhinged national government and a political faction is being contained, to a certain extent, by a semblance of power within these provinces. If Oli decided not to dismantle provincial assemblies, it is likely because he was afraid of political retaliation from these two provinces.

Secondly, as political science professor André Lecours states in his paper The Question of Federalism in Nepal (paywall), the origins of the federal system are “located in elite pacts seeking to create common markets and security arrangements, or looking to provide autonomy to communities with a historical homeland.” While he argues that these conditions do not apply to Nepal, historical identities in Nepal are nowhere as strongly embedded as in Province 2 and Sudurpaschim. Nepal’s ethnic diversity has meant that there was no unequivocal support for federal restructuring along ethnic identities, but Province 2 and Sudurpaschim were drawn along distinct ethnic and regional identities, respectively.

In Province 2, the Madhesi community’s demands for federalism was mainly informed by an ethnic identity. The districts in Province 2  have long suffered due to a narrow definition of Nepali national identity deliberately employed to exclude Madhesis. This included a one language policy — Nepali — a unitary state, and a discriminatory citizenship policy. In response to this exclusion, Madhesis were the first to demand a federal state.

In Sudurpaschim, however, historical identity emerges not from any cultural or linguistic underpinning but from the constant neglect from the government in Kathmandu. Sudurpaschim, or the far west, has always remained neglected by the Nepali state. Even though a large number of Brahmins and Chhetris, considered ‘elite’ ethnicities nationally, reside in the area, the region has one of the lowest Human Development Indexes in the country.

During state restructuring, residents of the Far West had demanded an ‘akhanda sudurpaschim’ — undivided far west — which was in conflict with the demands of Tharu communities residing in the southern districts who had staked their own claim for a separate province. Ultimately, a united far west was erected, as the national parties sought to repress the Tharu movement instead of looking for a shared resolution. The fierce demand for akhanda sudurpaschim ran contrary to the politics of inclusion but it did stake a claim to regional identity.

Historical oppression in both provinces have led to revolts against the unitary structure of the state. The demand for federalism has its roots in the Madhes while the Maoists, who led a 10-year insurgency, were especially successful in Sudurpaschim. As such, despite instability at the federal level, these provincial governments remain more stable, partly because their regional identity was created in opposition to the centralised nature of the state.

However, it is one thing to say that the provinces have contained the federal government’s overreach, but it is completely different to argue the provinces will continue to provide stable governments. The difficulty in Nepal’s transition to federalism was partly due to a lack of clear-cut regional identities and as such, compromises between national and regional political groups are disliked by both. This made it difficult for any one party to take ownership of the current federal structure.

Additionally, the origins of federalism, in countries that have adopted the system, can be traced to elite pacts, and it is not a given that regional elite coalitions will last. For example, the Janata Samajbadi Party, which is in power in Province 2, is formed out of two distinct coalitions supported by ethnicities that are regularly in conflict with each other. In Sudurpaschim too, different national parties still have strongholds which might make it difficult for regional elites to keep with their coalitions. The demands for Tharu autonomy have not subsided either, even if it might appear otherwise.

Karnali province shares many of the features outlined here about Sudurpaschim, as it too faced constant neglect from Kathmandu. The Maoist insurgency was also particularly successful in the region due to discontentment with the state. It also has the lowest HDI and highest level of poverty compared to other regions in the country. And yet, the provincial government there was hastily prevented from falling apart by the intervention of national-level political leaders. These show that the regional coalitions necessary for provinces to strengthen have not yet coalesced in Karnali.

With the current political crisis, there appears to be two distinct pathways for Nepal’s federal system. The first of which is the abrogation of federalism altogether. If the national parties continue to be in conflict about the basic tenets of the constitution and if regional coalitions do not consolidate in time, the new federal structure will not receive the ownership required for its survival. It is also not enough for regional elites to build coalitions; the masses too need to feel the effects of new governance structures. This does not bode well for the provinces. A survey by The Asia Foundation in 2018 showed that only 36 percent of people were aware of the restructuring of the state and only 16 percent were aware of services provided by the provincial government. When provinces challenge the federal government, some form of public support will remain essential and that support might not be forthcoming.

The second path could be that of federal consolidation and a movement towards the second phase in Nepal’s federal course. There are ample signs that a movement towards this stage might not be far-fetched. Post-constitution, the new Nepal Communist Party (NCP) not only made a “strong” government — with an almost two-thirds majority — at the federal level but also formed a government in six of the seven provinces. This homogeneity at the federal and provincial levels meant that any challenge to the federal government only came from one remaining province -- Province 2.

However, with the disintegration of the NCP, more provinces will likely be ruled by different interests. For example, even if the Dahal-Nepal faction were to come to power at the federal level, Gandaki province might be ruled by the Oli faction as the chief minister, Prithvi Subba Gurung, is an Oli ally. Both factions of the NCP are looking to build a coalition with the Nepali Congress at the provincial level. This will bring much-needed heterogeneity and competition into Nepal’s federalism. We can then draw parallels with Indian federalism, where the second phase of federalism only started in the 1970s, when the Indian National Congress, which had been in power since independence, started to lose ground. As the Congress weakened, regional parties came to prominence and Indian federalism moved to a second phase.

Both these paths depend on how central and regional political actors build coalitions and view their ownership towards federalism. Despite the difficulties in coming to an agreeable structure, federalism seems to offer distinct benefits to the Nepali state. Chief among them is some form of political stability at the regional level even when national parties are engaged in an entrenched conflict. In the process, federalism might even offer a retreat from the geopolitical quagmire that has aided frequent regime changes in Kathmandu.

True democratic or participatory development occurs when local communities are heard by their government, and have a say in decisions that affect them.

A new set of social media directives, combined with plans to purchase a content filtering system, are squarely aimed at stifling dissent online.