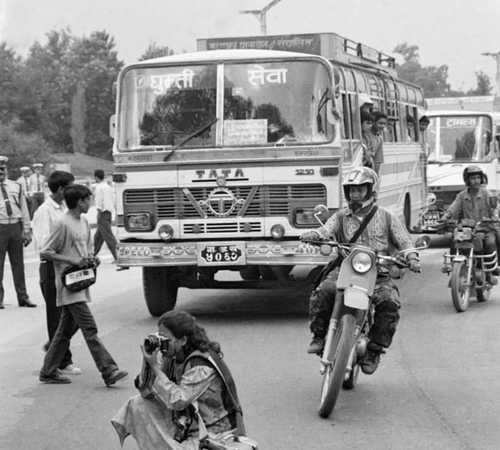 In the second week of May 2020, when the country was under a complete lockdown instituted to combat the spread of Covid-19, Sujita Pradhan, a business reporter with Republica daily, received a phone call asking her to come to the office for a meeting.

The next day, at the meeting, the Republica administration offered a strange proposal: they would pay the salaries due to staff members, who hadn’t been paid for three months, if they resigned; payment could not be assured for those who didn’t resign. The reason, the administration said, was a severe financial crisis stemming from the lockdown, which had forced many newspapers to halt circulation.

This was shocking news for Pradhan, who had started her job just six months prior, following a four-month internship. She had been excited to work as a reporter for the English-language daily as her passion for writing had led her to study journalism despite family pressure to choose science as her career.

“It took me weeks to realize that I had lost my workplace, my colleagues, and my passion for writing,” said Pradhan. “I was very connected with my work and I felt really bad when I lost my job due to Covid-19. I never thought that I would quit Republica so quickly. I was despondent when returning my identity card.”

Pradhan was just one of the many journalists, both aspiring and career, who lost their jobs due to industry-wide layoffs brought about by the lockdown and the Covid-19 pandemic. As many as 19 Republica journalists lost their jobs and the print version of the newspaper has yet to return to newsstands. Nepal Republic Media, which publishes Republica, laid off as many as 30 journalists following the closure of its two other publications -- Shukrabar weekly and Pariwar monthly. Many others working with Nepal Republic Media were not paid salaries for months.

In an unprecedented case, a large number of print media outlets, including all weekly newspapers, were forced to shut down or suspend their print editions, according to Dev Prakash Tripathi, president of the Nepali Print Media National Alliance.

“None of the crises in the past had such a great impact on the media, not even the 2015 earthquakes,” said Laxman Humagain, general secretary of Media Alliance, an organization of some of the country’s media operators.

Kantipur Media Group (KMG) -- the largest media conglomerate in the country which owns a television network, radio, a Nepali vernacular and an English daily, two magazines, and a tabloid --  also laid off journalists after the pandemic.

According to a National Report on the Impact of Covid-19 on Nepali Media by Freedom Forum, about 60 staff, including journalists, lost their jobs after KMG closed down Saptahik tabloid and Nepal magazine in July. Kantipur and The Kathmandu Post dailies suspended their print editions for 10 days at the beginning of the lockdown, but they were resumed subsequently. Nari magazine also resumed publication after being suspended for more than six months. Laid off journalists, however, were not called back to work.

The situation was not very different at other media houses either. In a row over salary cuts and layoffs, a group of journalists working for Annapurna Post daily, including its editor-in-chief Hari Bahadur Thapa, resigned from their positions. Six Kathmandu-based journalists who had protested the pay cuts and layoffs were  transferred out of the Kathmandu valley. The management, however, was forced to backtrack after journalist associations, including the FNJ, protested the decision, calling it ‘ill-intentioned’.

The Annapurna Express, another publication of Annapurna Media Network, has yet to resume its print edition while the weekly tabloid Sampurna was shuttered, leaving a dozen journalists unemployed.

Another leading English daily, The Himalayan Times, resumed its print edition four months after the lockdown while Nepali Times, an English weekly, restarted after nine months.

“People thought that newspapers could also be carriers of the virus, which was unverified and could be misinformation. The media itself became a victim of misinformation,” said Lekhnath Pandey, assistant professor of journalism and mass communication at Tribhuvan University.

Major weekly tabloids, including Dristi, Deshantar, Jana Aastha, and Sanghu, all suspended their print editions immediately with the first phase of the lockdown, which began on March 24, 2020. These tabloids have a long history of shaping public opinion but almost all of them were the first to face hardships after the nation-wide lockdown.

“Many of them resumed print after July, but they are still publishing limited copies due to shrunken circulation and financial resources,” said Tripathi, the print media alliance president.

Subida Guragain, a copy editor at Nagarik Daily, even resorted to a hunger strike on September 21 after not being paid for more than three months and then abruptly terminated when he returned from forced leave. His hunger strike drew widespread attention with other journalists joining his campaign and staging a relay sit-in protest outside the prime minister's residence in Baluwatar and the Department of Information and Communication in Sinamangal. Various political leaders also joined the protests, expressing solidarity with the journalists.

According to the FNJ survey, four percent of the 2,000 journalists surveyed lost their jobs while six percent were placed on forced leave. Thirty percent of journalists faced salary cuts or delays in payment during the lockdown with one-third awaiting salaries of at least four months, the report stated. Subsequently, many working journalists faced difficulties managing their expenses with the FNJ receiving nearly 300 complaints regarding salary cuts, non-payment, forced leave, or termination.

According to Mahesh Swar, assistant general manager for KMG, the pandemic taught media houses to plan differently for the coming days.

“We had never planned for a prolonged pandemic but the Covid-19 crisis has taught the media to become more technology driven,” he said.

But journalists did not just face financial problems. The pandemic also resulted in difficulties obtaining information and disseminating that information. There were also significant threats from both state and non-state actors. As many as 56 incidents of press freedom violation were recorded in the first six months of the lockdown, according to Freedom Forum. Journalists faced threats for exposing ‘irregularities’ in the procurement of medical equipment while the media faced restrictions on content for publishing reports that were critical of ruling party leaders and their close ones, according to the Freedom Forum report.

Read more: Print is back but many journalists are not

“First, the mobility of journalists was limited due to the lockdown and fear of the virus. Second, news sources didn’t open up but rather used the situation as a pretext to ignore questions from the media,” said Assistant Professor Pandey. “Journalists, however, still managed to expose the Omni scandal and other irregularities.”

About 500 journalists across the country had tested positive for Covid-19 until mid-December, according to the FNJ. As many as five journalists died due to the virus. Journalists also faced psychosocial challenges. According to a survey conducted by the Nepal Press Institute, 25 percent of 1,143 journalists experienced depression as a consequence of Covid-19.

According to Yangesh, who heads eKantipur, the online edition of Kantipur daily, readership spiked following the lockdown.

“When KMG suspended its print editions, our website witnessed increased visitors as well as a larger flow of news content as journalists affiliated to the paper moved online," he said.

Many journalists who lost their jobs also transitioned to online media. Journalists who had resigned from Annapurna Post, including editor-in-chief Thapa, started ekagaj.com. Some who lost their jobs after the closure of Nepal magazine, including editor Basanta Basnet, joined shilapatra.com. Similarly journalists from Saptahik joined nepalipublic.com, an online magazine, and shutranews.com, a multimedia online magazine. However, both these outlets failed to retain their journalists after just a few months, citing financial issues.

Numerous new online portals, including aayomail.com, palikakhabar.com, ekagaj.com, nepalwatch.com, nepalpress.com, ukera.com, were started during the Covid-19 pandemic. Most of these new outlets recruited journalists laid off from print media or those facing salary cuts and forced leave.

Advertisement also began to move online, squeezing media houses who were already reeling from a lack of circulation.

According to Rabindra Rijal, president of Advertising Agency Nepal (AAN), advertisement revenue fell by up to 75 percent in the first few months of the pandemic. The annual advertising revenue of Rs 10 billion is believed to have declined by 30 percent in the fiscal year 2020/21, according to AAN.

With the pandemic shutting down industries and the lockdown forcing everyone indoors, advertisers saw little value in placing ads, especially on print media.

“Print media received only 25 to 30 percent of the advertisements they would’ve received at other times. TV and radio received 40 and 50 percent, respectively, during the lockdown,” said Humagain of Media Alliance.

As a result of the decline in advertisement, media houses began to minimize their operation costs by laying off journalists, cutting off salaries, and suspending print editions. Some media houses remain in crisis and it may take another year to recover.

“We are worried about whether advertisers and industries will return to the previous stage of advertising as their income has yet to bounce back,” Swar of KMG said.

Despite all of these challenges, journalists still managed to expose corruption, irregularities, misconduct, and wrongdoing in government and non-government agencies.

But not everyone had the luxury of trying something new. For many journalists, their careers came to a halt.

Sujita Pradhan was unable to get a job at any other media. She says that she’s lost the enthusiasm for journalism that she had in the past. Even now, she’s considering whether to return to journalism.

“I used to read all major newspapers daily but gradually, I’ve stopped,” she said. “I don’t have any interest in the news these days.”

This story was developed under the ‘Journalists in Transition 2020’ fellowship.

Ashok Dahal  Ashok Dahal is a Kathmandu based freelance journalist who mainly writes on political and social affairs. He has worked in the newsroom of print, television and radio media outlets previously.