Valentine’s Day reinforces ‘ideal’ relationships as ones that are heterosexual, monogamous, sexual, and romantic, but love comes in all different shapes and sizes. 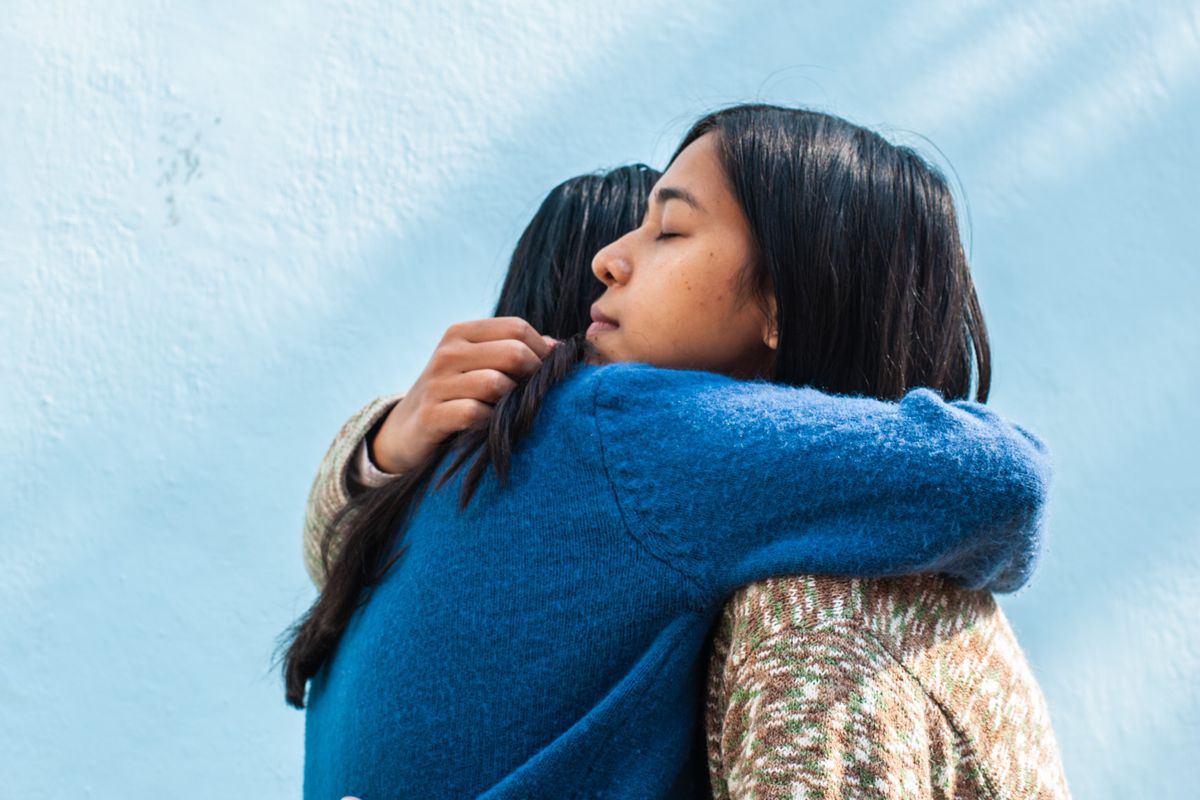 Love or hate Valentine’s Day, it is February 14 and as the eminent philosopher Reg Presley of the Troggs put it, “love is all around”. Love is in the heart-shaped doughnuts on the shelves of bakeries in Basantapur, in the children carrying roses and accosting boys to buy one for their female friend, in the malls, restaurants, cafes, and stores adorning their interiors with heart-shaped balloons, and on Instagram feeds flooded with dinner and drinks offers for two, and more. And because it is Valentine’s Day, the price of roses has skyrocketed to almost Rs 120 per stem.

Over the last week, Kathmandu has been painted red by the celebration of romance, inspired by a Christian saint. Valentine’s Day celebrates love, or at least the kind of love that is depicted in stereotypical romantic comedies.

When I brought up Valentine’s Day to my friends, I was met with a mix of reactions. There were mostly eye rolls, a few shrugged shoulders, and the occasional excited smile. But for Dipta Shrestha, who is in her early 40s, this February 14th is all the more special, as it marks 20 years since she agreed to marry her husband.

“No matter how busy we are the rest of the year, for the past 20 years, we’ve always made time to catch up with each other over dinner and drinks on this day,” said Shrestha, who left her job in the banking industry after 19 years to start Cafe House 5 in Jhamsikhel with her friends from high school.

But it wasn’t always like this. Even when people like Shrestha were growing up, Valentine’s Day was non-existent in Kathmandu. But in the past two or three decades, globalization and mass commercialization have festooned the city with hearts, flowers, proposals, gifts, and kisses.

“During our days growing up, the concept of Valentine’s Day or ‘Pranaya Diwas’ was unheard of,” said Maili Shrestha, 45, who runs a cold store in Tripureshwor. “But these days, it's so nice to have my husband come back home with a rose.”

Though Maili’s husband, along with seemingly every other person, associates Valentine’s Day with a rose, its origins are much murkier. While scholars generally agree that the holiday gained popularity in the 1840s in the UK and US, the specific historical roots of the celebration remain ambiguous.

According to some sources, it began as Lupercalia, a wild pagan Roman fertility festival held from February 13 to 15 involving animal sacrifice, ritualized sex play, and general debauchery. Another article points to Roman Emperor Claudius II who executed several men named Valentine on February 14, one of whom later became a martyr in the Christian faith.

Fast forward several centuries, the day reappears in the Middle Ages, first in Chaucer’s poem ‘Parliament of Fowls’ (which refers to the mating pattern of birds in early spring), and later in Shakespeare’s Hamlet, which alludes to lucky lovers meeting on St. Valentine’s Day.

But what do a pagan fertility festival, a Christian martyr, and English poetry all have something to do with this now ubiquitous, commercialized celebration of love?

In her book Market Sentiments, Elizabeth White Nelson, an associate professor of history at the University of Nevada in Las Vegas, whose research focuses on holiday consumerism, demonstrates that the origin stories were popularized in the 19th century to give the holiday historical grounding, particularly as a counterpoint to society’s fears about its commercialization. Her research supports the theory that romantic relationships in the 19th century were characterized by a focus on economics, with Valentine’s Day serving as a ‘broker’.

As ambiguous as its origins might be, Valentine’s Day has been adopted and adapted by cultures around the world. The day began to be marked in earnest in Nepal, specifically Kathmandu, in the mid-1990s, owing to its growing popularity in India, before right-wing groups began to condemn the tokens of romance as antithetical to Indian culture. This backlash prompted the Indian writer Gurcharan Das to propose that Valentine’s Day be celebrated as ‘Kama Diwas’ in order to remind Indians that “romance is as Indian as the Ganga”.

But Valentine’s Day is about much more than love and romance. It is, in fact, about capitalism and how marketers and businesses, particularly Archies and Hallmark, began to promote the exchange of greeting cards, chocolates, stuffed teddy bears, flowers, and expensive jewelry as markers of love. Valentine’s Day has historically been a heteronormative celebration that exploits human intimacy in order to sell commodities. The proliferation of mass-produced aggressively marketed Valentine greetings raises genuine concerns about the loss of sincerity, authenticity, and self-expression amidst consumer capitalism. 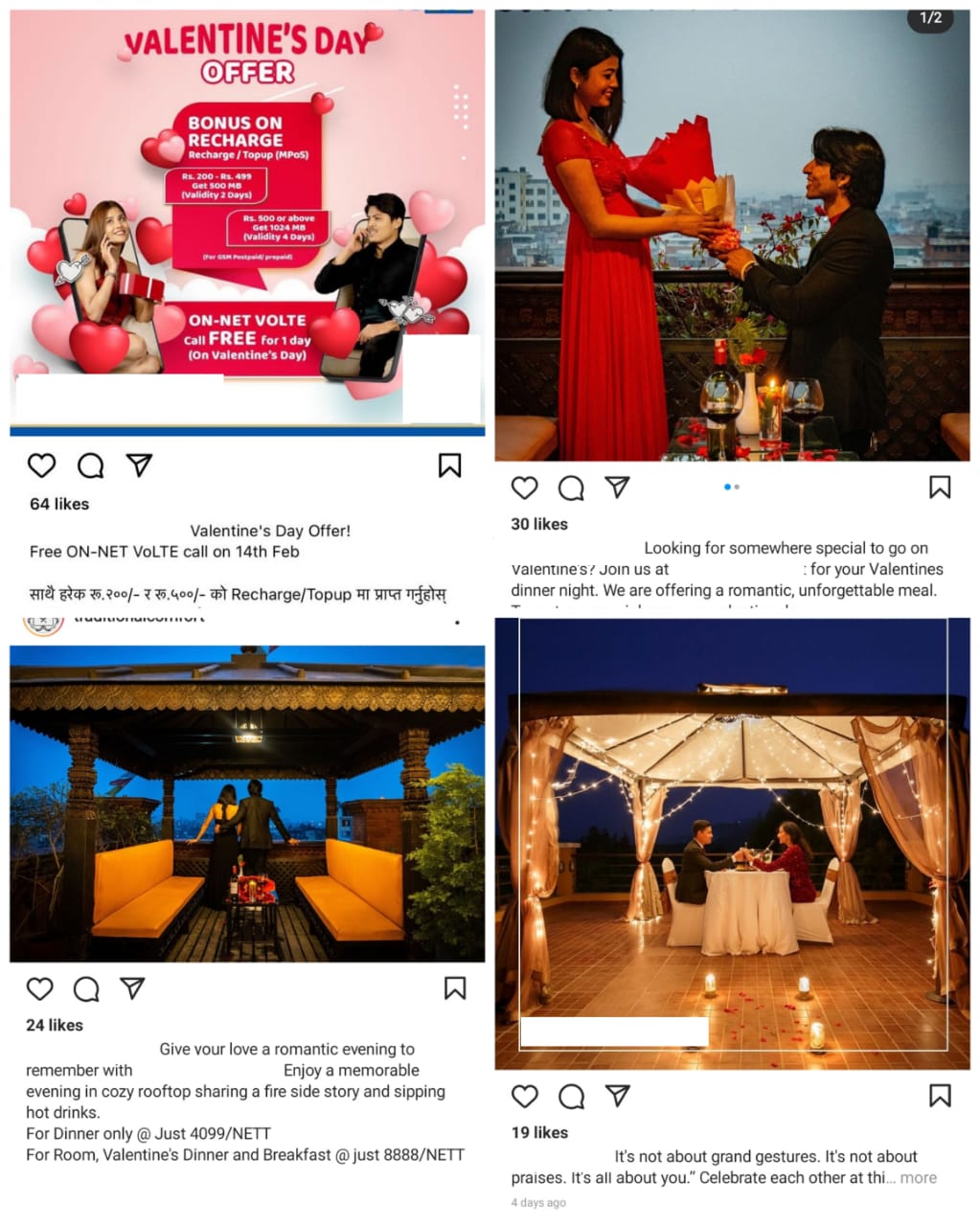 “For me, Valentine’s Day is about love — and what’s not to love about love? There's no need to buy flowers, chocolates, or a corny teddy bear, but if that's what you want to do, don't let me stop you. There are no rules to how you celebrate the day or with whom you celebrate it,” said Bhumika Thapa Shah, who once hosted the show Love Songs @ Seven on Radio Kantipur.

As a host to a call-in show where young lovers would place requests for songs to dedicate to their partners, Shah knows a thing or two about how people express love.

“It was probably the most romantic thing to have your love letters, messages, and a song request chosen by a radio presenter and shared with listeners,” she said. “How many memories must resurface when you listen to a song that was once dedicated especially to you.”

These days, hypercapitalism is in overdrive and as soon as the month of February begins, restaurants and hotels begin offering date night and getaway packages. The days before February 14th are a flurry of reservations at fancy restaurants and buying flowers, cakes, cookies, and scented candles. Then, there’s also the pressure of having to out-do yourself, year after year.

“Valentine’s Day has been structured around gift-giving and fancy date nights. But there are so many ways to show a person you love them, other than spending money,” said Dhiru Lama, owner of Jalpa Coffee Club in Jhamsikhel.

Valentine’s Day celebrates love, but it is often a sanitized and socially acceptable form of love. It is no wonder that almost all of the advertisements for Valentine’s Day in Nepal feature partners of the opposite sex. The idea of love that is perpetuated is solely between a man and a woman.

“The messaging of Valentine’s Day not only valorizes romantic love as the key to human happiness, but also perpetuates toxic masculinity, heteronormativity, and traditional gender roles,” said Lama.

For many queer people, Valentine’s Day is a reminder that their identity isn’t well-represented, or represented at all, leading them to feel invisible. Valentine’s Day reinforces the idea that ‘ideal’ relationships are ones that are heterosexual, monogamous, sexual, and romantic.

“Jewellery commercials almost always depict cisgender heterosexual couples, reinforcing the traditional gender norm of the man giving a beautiful and expensive gift to his female partner. We see the same ideas reflected in products, such as ‘His & Hers’ monogrammed items and cards specifically addressed to husband/wife or boyfriend/girlfriend,” said Ankit Khadgi, a journalist who identifies as queer. “If and when we attempt to participate in Valentine’s Day, we are likely to be met by heteronormative assumptions. For example, ‘oh, your girlfriend will love this’ when purchasing a gift. Or having a restaurant server assume your gender or relationship status.”

Khadgi says he has a soft corner for Valentine’s Day but would like to see more same-sex, non-binary, and non-cisgender couples in advertisements. Broadening the celebration of Valentine’s Day also allows people who are traditionally excluded to enjoy festivities. Celebrating Valentine’s in a strictly romantic manner excludes aromantic and aromantic-spectrum people, whose lack of romantic attraction may lead to them feeling alienated during a time when romantic attraction defines the season.

While advertisements, gifts, and greeting cards for Valentine’s Day continue to sell the same old romantic notions, Nepali adults are increasingly rejecting the traditional nuclear model. Valentine’s Day is evolving into much more than a celebration of romantic love: it’s also about celebrating your love for everyone in your life. Some plan to spend Galentine's Day – a take on Valentine’s Day in the TV show Parks and Recreation that celebrates female friendships and falls on February 13 – with their friends. Others go on casual dates. Some even celebrate Valentine’s Day with their children. The point being to celebrate all kinds of love, not just the romantic kind.

“I’ve made a pact with a friend to go on dinners on Valentine’s Day and cringe at cheesy couples. We’ve kept the momentum going for three years now. The day also gives us a chance to celebrate a friendship that has lasted for as long as we’ve known what it’s like to make a friend. Oh, I also bring her flowers,” said 26-year old Prajita Gupta.

“The love and stability that friends and family afford each other deserves to be celebrated as much as the love and stability afforded by significant others, and Valentine’s Day is the perfect time to show that appreciation,” said 16-year old Prasanna Katuwal, a student at Paragon Public School, Kathmandu.

While current celebrations might largely revolve around cishet, heteronormative relationships, and traditional ideas of betrothal, there is always the possibility to reclaim the day and celebrate it in the manner we want to.

“People today celebrate with their children, pets, friends, teachers, and more. That’s a much more healthy way to spend the day. It should be about reflecting and sharing your love for others,” said Shah.

Valentine’s Day is not essentially rooted in Nepali culture and that gives Nepalis the freedom to change the narrative of the day and make of it what you will.

“To me, love is about so much more than romance and that’s a common experience among those in the queer community. As I see it, ‘magic’ can be found in all kinds of loving relationships,” said Khadgi. “I hope that someday I’ll not only live in a society that celebrates the power of the whole spectrum of loving and socially supportive relationships but also facilitates the formation of multiple intimate friendships and valued connections.”

Nishi Rungta  Nishi Rungta is a Research and Development Officer at Pad2Go Nepal. Along with her part-time job here, she also co-runs a marketing agency and clothing label Lucid Inc.

The ultimate revenge of the hill bureaucrats