“Soul Sister” stars Namrataa Shrestha from beyond the grave 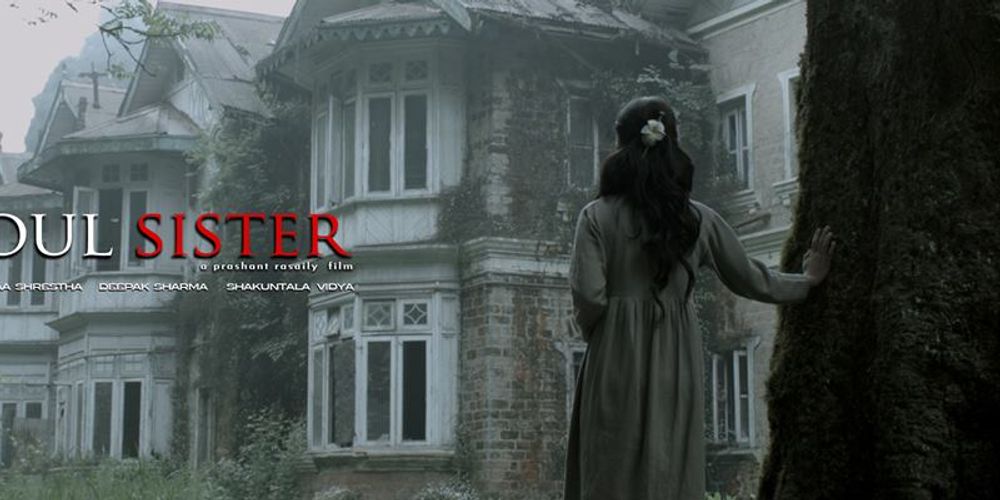 Soul Sister, the new film from director Prashant Rasaily, is hardly representative of contemporary Nepali cinema. For one, its dialogue is in both Nepali and English. It also does not have the manic-depressive melodrama that some films seem contractually bound to. Nor does it have the obligatory chase scene through an abandoned factory. But those elements are hardly requisite for a good film. What then does the film offer its viewers? Does it have enough merit to keep its audience engaged?

At first, the film is compelling. Rasaily, who does his own cinematography, shoots the initial scenes with long lenses behind potted plants and furniture, boxing his characters into compressed frames. It’s as if they are being spied on. The sound in these scenes has a rough, scratchy quality and the barely audible dialogue adds to the sense of voyeurism. We are seeing the characters from a specific vantage point: that of Maya—played by Namrataa Shrestha—who is recounting events in her life.

Maya’s narration of these scenes seems an interesting device. The disconnect between the Maya we see on screen and the Maya we hear adds tension to the audience’s reception of her. Is it pointing to her fragmented personality? A psyche alienated from itself? The muted colors Rasaily uses for shooting the foggy landscape, and the inorganic, unpolished quality of the sound design create a moody, unsettling atmosphere.

It’s no spoiler to say that Soul Sister is a ghost story. But what kind of ghost story is it? The film has barely any actual fright. Not once did I jump in my seat or notice anyone else in the restive theater register a scare. So if fright isn’t what the filmmaker is going for, what is he trying to tell us?

Maya, an orphan cared for by an aunt until young adulthood, returns to her family home in Sikkim. There she begins to have nightmares that so debilitate her that she moves into a hotel room. What is causing this terror? What repressed traumas have come back to haunt her? Rasaily can scarcely be bothered to explore these questions and root Maya’s visions in psychological reality. Instead, he gives us a wholly unconvincing affair between Maya and a married man—Vastab, played by Deepak Sharma. Setting aside the utility of this sub-plot to the film, the relationship simply isn’t credible. Where is the hesitant playfulness of people first attracted to each other? Where is the charged courtship dance of potential lovers? We know that the characters have fallen for each other only because the narration tells us so.

In fact, Rasaily fails to imbue any of the set pieces with a sense of lived-in experience. The images of Maya’s nightmare are strangely insipid. Not once do we sense Maya’s dread on a visceral level. Nor do we see a steady escalation of Maya’s despair. Her narration is the only clue to any momentum in the story. This device, so promising at the beginning of the film, signaling psychological crisis, ends up a limp gimmick for moving the story forward, merely giving us information about the events in Maya’s life and little else.

And what an uninspired life that is. Shrestha’s alluringly smooth face, shot primarily in close-ups, could have been a canvas on which to project our deepest fears. But her performance here lacks spark. She plays Maya as depressive, mustering only one-note deliveries. Maya is mind-numbingly passive, inexplicably failing to make a single attempt to wrest control of her fate. The collaboration between Rasaily and Shrestha, who produced the film, fails to elevate Maya’s character above that of a benign ghost. Instead, it is the living who are truly compelling and the audience never grows to care about the fate that eventually befalls Maya. The film ends with a garden-variety platitude about the cycle of life and death, and the illusory nature of the world we live in, enumerated explicitly by the narrator. Had the duo properly calibrated the stakes for Maya and had she acted convincingly as a person in a crisis, literally, of life and death, her attempts at holding onto her sanity would have made for compelling, unsettling viewing.

Mr. Rasaily is apparently known for making films on a low budget and it shows in the technical aspects of the film. Darkness is an appropriate palette for a ghost story, but when almost nine-tenths of the frame is black, the nuances of the image are lost. His low-key lighting seems more like an attempt to cut lighting expenses than a justified aesthetic choice. Rasaily is capable of  creating beautiful images, as evidenced by the understated shots of Sikkim, but there were many instances where I wished that he would hold his camera still and focus squarely on the actors. The ubiquitous pans and tilts make certain scenes look like architectural promotions. Did he make a deal with Vesper (the Jhamsikhel restaurant and one of the film’s locations) to highlight their wine collection?

My initial fascination with the sound design also gave way to despair when I detected one too many digital artifacts in the final mix. It’s as if the sound designer had just discovered noise reduction software and went overboard. The ominous disquiet at the beginning of the film seems no more than a happy accident of incompetence.

The best horror films are usually an allegory for the world we live in. The Exorcist (William Friedkin, 1973) is about the confusing, sometimes terrifying onset of female puberty and the attendant anxieties about female sexuality in an overly patriarchal world. Roman Polanski’s masterful Rosemary’s Baby (1968) can be read as a story about a woman’s anxiety regarding motherhood and her ability to be a protector and provider. On what psychological or social realities does Rasaily base the arc of his heroine? Persistent nightmares and terrifying visions are generally engendered by some deep trauma. What sort of trauma has Maya repressed? The denouement of the story spells that out for the audience but we see barely a hint of it during the film. Rasaily seems to have believed that the Nepali audience would blindly accept his pseudo-spiritual conclusion and failed to work on a coherent narrative. As a result, he has made an utterly unsatisfying film.

Sushrut Acharya  Sushrut Acharya studied theater in New York and practiced filmmaking in San Francisco. A recent returnee to Nepal, he teaches film at Ullens School. Besides writing on film for The Record, he contributes theater reviews and features to La.Lit, the literary magazine.

An ingenious, must-see documentary about the trauma of Indonesia’s bloody campaign against the communists

This week in Writing Journeys, filmmaker Kesang Tseten speaks about his dramaturgical approach to making films.

“Soul Sister” stars Namrataa Shrestha from beyond the grave

A familiar tale, told a new

In Suntali, director Bhaskar Dhungana chooses simplicity as his artistic vehicle for exploring the profound subtleties of life.