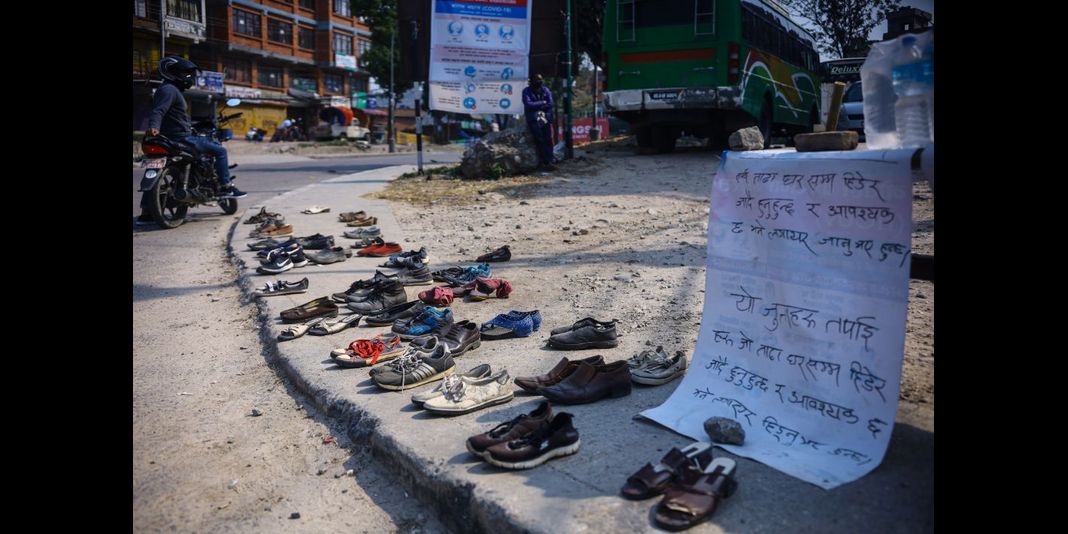 On August 4, Siraha Municipality submitted a detailed list of its Covid1-9 related expenses to the District Administration Office (DAO), the government body authorised to monitor financial irregularities in local bodies. A week later, when these details got leaked on social media, it produced nothing short of an outrage as the price quoted for some goods was ten times their market price.

A bedsheet was apparently purchased for NRs 8,071, a pillow case for NRs 2,876. Difficult as it is to believe, the municipality claims both items were purchased to furnish quarantine centres. Quarantine centres have gained considerable flak for being poorly equipped and highly unsuited for the purpose of isolating potentially infected individuals. The notion that over NRs 10,000 was spent to cover a single bed in such centres is absurd, to say the least. According to locals, little has been done in their localities to contain the virus.

Concerned over the discrepancy in market prices and those listed by the municipality, a team of officials from the Bardibas branch of the Commission for the Investigation of Abuse of Authority (CIAA) confiscated official documents to investigate the matter. Since then, the municipality has produced a revised expenditure list, but not before the municipal chief and other bureaucrats were ridiculed for presenting fake invoices.

Officials of Siraha Municipality are among bureaucrats in hundreds of local bodies to have pocketed money from Covid-19 budgets. While the pandemic has resulted in the loss of jobs and salary cutbacks for many, it has given government officials and elected representatives at all levels one more opportunity to use unscrupulous means to enrich themselves. The problem of corruption and misuse of state coffers goes far beyond the current crisis, but the misuse of emergency funds at a time like this is especially reprehensible.

A village in Kailali’s Lamki Chuha Rural Municipality claimed to have spent NRs 7.3 million on its Covid response measures in 77 days. As per the details it provided, NRs 1.1 million alone was spent on allowances for volunteers, local representatives, and health workers. But questions were raised over whether the local bodies spent the budget on genuine containment measures or pocketed chunks of the budget by producing fake documents. The issue came to the fore when volunteers claimed they had never received the allowances, unlike what was stated in the official documentation.

In Mugu’s Saaru Rural Municipality, local officials have been accused of misusing nearly NRs 2 million by creating a Covid-19 fund, distributing it amongst themselves, and then blowing it on wining and dining. A corruption complaint has been filed at the Mugu DAO against the officials, including Saaru’s chief administrative officer Dhanne Budha and accountant Jeth Bahadur Budha. An investigation is currently underway.

These instances represent but a few examples of how the billions of rupees allotted for fighting the coronavirus pandemic is actually being utilised. While the government claims that over a staggering NRs 12 billion has been spent in combating the pandemic, no significant progress has been achieved so far. Instead, the death toll has increased significantly in recent weeks, while infections have surpassed 31,117.

Anti-corruption experts tracking how budgets allotted to fight Covid have been spent say that as with other natural disasters such as earthquakes, landslides, and floods, the current pandemic has also become a means for many to make money.

“For certain politicians, bureaucrats, and businessmen, the pandemic has become an opportunity to amass property,” said Narayan Adhikari, country director at Accountability Lab, an organisation advocating for transparency and accountability.

Adhikari, who has been tracking the money spent on the current crisis, added that officials at the federal level responsible for handling Covid-19 response measures have been abusing their authority while awarding contracts to people they know. “Both local and provincial governments have been producing fake bills to maintain accounts. To keep officials from being exposed, the government gives us lump sum figures, but no expenditure details,” said Adhikari.

The first Covid-19 case in Nepal was detected in January, soon after the virus first emerged in China in December 2019, in a student who had returned from Wuhan. Nepal was the seventh country, along with the US, Thailand, Vietnam, Japan, Singapore, and South Korea, to confirm the presence of the virus within its borders. The news of the first case had already made the Nepali public anxious about its spread in the country.

But the Ministry of Health and Population (MoHP) did nothing to prepare for the spread, whether it be by arranging medical equipment or by enforcing strict quarantine guidelines on travellers. The ministry began to take action only from the last week of March, but by then, Covid cases were already spreading across the country.

One such action the government took was to sign a deal with OMNI Business Corporate International on March 25 for the supply of medical kits. This decision soon gave rise to public outrage as the business firm had recently established ties with Prime Minister KP Sharma Oli and his aides. The government, however, justified its actions by telling the public it could not find a company more suited than OMNI for the task of importing essential medical equipment within a short timeframe. In fact, the firm was selected as a medical equipment supplier in the absence of a competitive bidding process, which is in clear violation of public procurement rules.

An investigation carried out by the Public Accounts Committee of the Parliament shows that the government ended up paying almost double the existing market prices for medical equipment, N95 masks, non-contact thermometers, and other personal protective equipment meant for medical professionals. For example, the MoHP paid NRs 828.67 per N95 mask, whereas the market price was only NRs 462.50. It also paid NRs 7,500 for each non-contact thermometer, while the market price had been only NRs 4,000 just weeks before OMNI was awarded the contract. Furthermore, the government itself arranged chartered flights to ferry the equipment procured by OMNI. Health ministry officials involved in the contract awarding process have admitted that they had hiked the price by 20 percent for the goods procured by the firm.

The medical procurement deal with OMNI created much controversy after the media exposed price discrepancies as well as the firm’s connection to ministers and PM Oli’s aides.

Under enormous pressure from all quarters, the ministry, on April 1, scrapped the medical procurement deal, worth over NRs 1 billion, citing the company’s failure to supply the essential medical equipment within the stipulated deadline. It also fined the business firm an additional NRs 50 million, ordering concerned authorities to blacklist the company and bar it from engaging in any future bidding process.

The health ministry then instructed the National Health Research Council to use the 75,000 rapid diagnostic testing (RDT) kits, worth USD 6 million, procured by OMNI only after conducting a thorough investigation to confirm the kits’ reliability. But the government used those kits without informing the public about whether they were actually reliable. It also procured more RDT kits and used them even as some migrant returnees who had tested negative for RDTs tested positive for Covid-19 posthumously.

The Oli government continued to violate the public procurement process even after the controversial deal with OMNI was scrapped. It awarded the same deal to the Nepal Army with the intent of avoiding possible investigations from anti-corruption agencies as the army is beyond the jurisdiction of agencies such as CIAA.

A group of Kathmandu youths initiated street protests demanding that RDT tests be stopped and that details about the government’s expenses for fighting the Covid-19 crisis be disclosed. As time passed, it became evident that RDT tests were highly unreliable and counterproductive to the task of reducing the spread of coronavirus. In late July, months after the crisis first emerged, the MoHP stopped using RDTs.

Apart from the funds released from the central treasury, the federal government has also been using the money deposited in the Covid fund for the provincial and local governments. So far, provincial governments have spent NRs 1.03 billion, whereas 753 local governments like Siraha Municipality were allotted NRs 6.81 billion in total for their Covid response strategies. The money, according to Khatiwada, was meant for procuring medicine, establishing health infrastructure (including quarantine facilities), and mobilising human resources.

Minister Khatiwada didn’t elaborate on whether the budget was spent entirely on genuine causes or whether elected representatives colluded with bureaucrats to misuse it. Anti-corruption activists say the money was largely misused because nobody seems to have opposed the wrongdoings by the ruling leaders. The manner in which anti-graft bodies like the CIAA have overlooked corruption scandals involving billions of rupees raises questions about the transparency around fund allocation and expenditure in the fight against coronavirus.

Observers say that the CIAA may be overlooking corruption complaints filed against ruling leaders, including the medical equipment procurement scandal involving OMNI, because of the relationship between its leadership and PM Oli. Nabin Ghimire, who heads the most powerful constitutional anti-graft agency in the country, is widely considered to be an Oli loyalist. He was appointed to the post of CIAA chief after Oli came to power, and critics have often accused his left-party-leaning sympathies for not expediting investigations into high-profile corruption cases involving ruling leaders. In the infamous Baluwatar land scam, for example, some leaders were acquitted while charge sheets were concurrently being filed against those involved.

Even as the Parliamentary Account Committee (PAC) implicated health minister Bhanu Bhakta Dhakal, the minister’s health advisor, Dr Khem Karki, and the then health secretary, Yadab Koirala, for the faulty deal with OMNI, the anti-graft body hasn't taken up the case. Neither the minister nor the secretary have been investigated. Even five months after the health ministry made its recommendations, OMNI has still not been blacklisted.

On August 21, the business firm made an appeal at the Supreme Court, asking to not be blacklisted and for the withdrawal of the government’s earlier decision to confiscate the USD 516,922 deposited at Himalayan Bank for the procurement of medical supplies.

Khem Raj Regmi, president of Transparency International Nepal, suspects that there may be an understanding between OMNI and the government to use the Supreme Court to dismiss the case forever.

Owing to how it has misallocated and misappropriated funds, the government, despite spending billions of rupees, has failed to contain the virus. Instead, Covid-19 is spreading rapidly and taking more and more lives. The lump sum expenditure disclosed by the government has only served to raise public doubt, especially given the government’s history of mishandling all kinds of public funds and using them for personal gain.

“Twelve billion rupees is a huge amount,” says Regmi. “How did they spend all that money when all they’ve done is arrange such dreadful quarantine facilities?”