Rolling coverage of developments as the floods hit across the country. 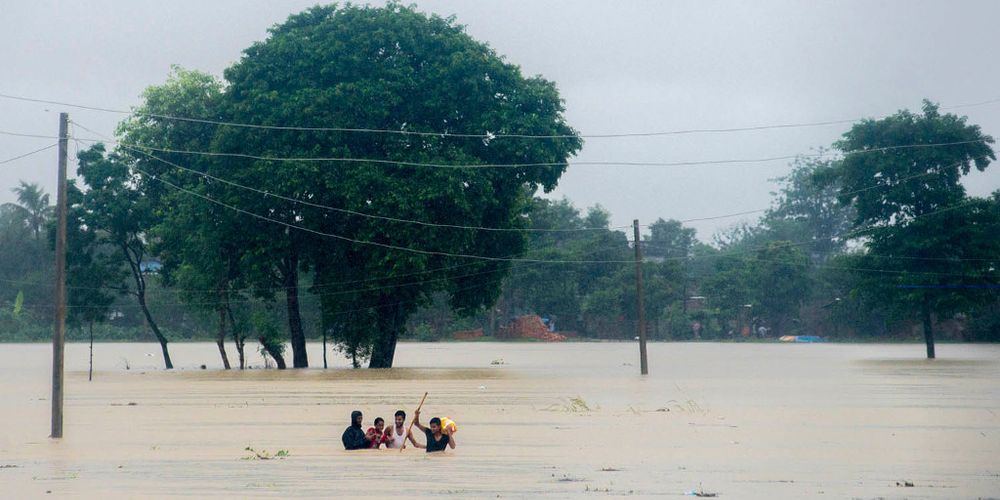 The updates should appear ABOVE this message. Please be patient. Previous updates below.

9:50 am, August 13, 2017: Live update from Nepalgunj. Continuous rain since 1 am this morning has worsened the flood in Nepalgunj. 200 people were rescued from the affected areas in Rapti Sonari and Gangapur rural municipalities by army helicopters yesterday. Locals seem unable to volunteer for rescue efforts any more and require support from security forces. The incessant rain has also brought the Rapti river's surface dangerously close to the bridge.  (Based on reports by Alam Khan and Haroon Halwai from Nepalgunj.)

8:30 am, August 13, 2017:  Day 2 of our live blog on the 2017 Nepal Flood. Real-time update from Department of Hydrology and Meteorology. Babai river at Chepang and Bhada bridge, and Riukhola at Bankatta, "Above Danger Levels." See DHM's live river watch here.

10:40 pm, August 12, 2017: Schools in Saptari are to remain closed for four days from Sunday to Wednesday, where over 70 thousand people are estimated to have been affected by the floods.

10:10 pm, August 12, 2017: Flooding of the Gaagan river wreaked havoc in Aurahi, Siraha, earlier today, where hundreds of houses have been flooded. Photo and details by Santosh Kumar Yadav, a journalist based in Siraha.

10:04 pm, August 12, 2017: Heavy rainfall around the country has obstructed the national electricity supply system. Nepal Electricity Authority (NEA) reports that its affected infrastructures include the substation in Duhabi, Sunsari, and at least three transmission lines: Anarmani-Kaweli, Khimti-Dhalkebar, and Hetauda-Chandranigahapur-Dhalkebar.

9:46 pm, August 12, 2017: Earlier today, Nepal's Foreign Minister Krishna Bahadur Mahara formally requested the Indian government, through the Indian Ambassador to Nepal Manjeev Singh Puri, to open the gates of all the dams along the Nepal-India border.

Requested Govt.of India through the Ambassador in Kathmandu to open all gates of dams to prevent further damage by inundation in Terai.

9:36 pm, August 12, 2017: Meteorological Forecasting Division reports that heavy downpours around the country will continue through Sunday, August 13. Mid- and mid-western Nepal will see comparatively higher rainfall than the eastern regions. Better weather is expected from Monday. 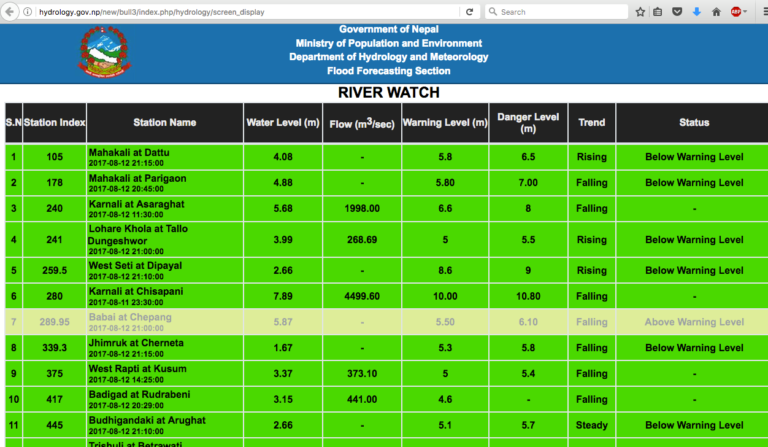 9:14 pm, August 12, 2017: 37 gates of Koshi barrage, out of the total 56, been opened after it signaled a red-light alert. The water flow has crossed the 250 thousand cusec, indicating increased risk of flood. Water flow above the 300 thousand cusec limit means a full danger zone. According to Sunsari district's Assistant Chief District Officer Rajesh Giri, water levels are likely to increase as eastern hilly districts continue to see rainfall.

9:04 pm, August 12, 2017: Dr Govinda KC, now on the 20th day of his hunger strike demanding medical-education reforms, asks Nepal Medical Association to withdraw its protest. He has appealed all the country's medics to provide medical support to flood victims.

8:48 pm, August 12, 2017:  An update from Dang. Uday GM from the district reports that two people have been confirmed dead by the local police. 48-year-old Bhagwati Nepali was trying to save her goats when the sudden flood in Tuhi Khola swept her away. She lived in Tulsipur Sub-Metropolitan City. Another person was swept away in the same city by the Betani river. Two people were injured in Lamahi.

The roads from Ghorahi to Tulsipur and Ghorahi to Lamahi remained closed all day.

8:36 pm, August 12, 2017: At least 29 people have died so far due to floods and landslides triggered by the monsoon rains in different parts of the country in the past 24 hours. All three security forces in the country – police, armed police and the army – have been engaged in rescue operations. Here is the list of causalities by district so far.