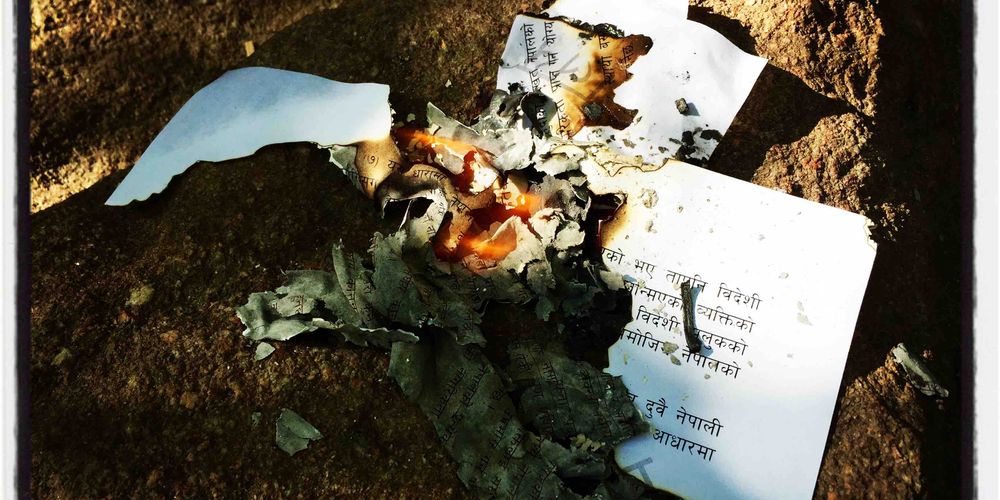 I don’t know when I realized I wasn’t equal to my brother. My mother was a medical doctor, my father a PhD; there was never any question that my sister and I would have the same educational and professional opportunities as my brother. When we were old enough to understand such things—I may have been nine or ten—my parents explained that when the time came, they’d will their property to us evenly. My sister and I were promised that we were, in all ways, equal. But by that time I already knew that the rule of our family wasn’t the law of the land. I understood that outside the shelter of our exceptionally socially liberal family, in Nepal, my brother was more valued than I.

Concepts such as rights come later in life, but the feeling of our lesser worth is inculcated early in Nepali girls. Is it when we’re praised more for our looks than our achievements? Is it when the expectations of us are shaped, violently, to make us fit an impossible ideal? Is it when we’re reminded, over and over, to behave demurely, to be pleasing, to agree, to smile? The messages come from all directions, all the time. We’re taught early in life that we’re just girls.

I’m in my forties now, and living, for the moment, in Canada. I’ve successfully eluded the impossible ideal of Nepali womanhood. I haven’t married, I don’t have children, my family life is happily unorthodox. My mother didn’t make my sister and me spend our menarche hidden away, as girls of our caste were expected to do; we’ve never been considered untouchable when menstruating. I don’t defer to my partner; I don’t defer to men in general. From the age of fourteen I’ve identified as a feminist.

But by law I’m a Nepali woman, and therefore, by law, lesser than a Nepali man. Though I’ve lived in the US and Canada for half my life, I have, against the advice of well-wishers, and with some abiding, perhaps misguided, loyalty, retained Nepali citizenship.

And so the Nepali constitution governs me, as does Nepali law.

It’s widely acknowledged, and not just by feminists, that Nepal’s civil code has been guided by Hindu law, which sees women as the property of either their fathers or husbands. There’s a Nepali adage—“Women have no caste”—which goes to the heart of the Hindu patriarchal devaluation of women. Our identities are defined by men; we have no essence, no identity, of our own.

The laws resulting from such negation have always been abhorrent. When I first became politically aware—in my early teens—Nepal’s civil code was so hateful it assigned punishment for rape according to whether the victim was a virgin, married, or a prostitute, because her worth relied on her sexual purity. Women couldn’t inherit parental property. Abortion was illegal. There were only one or two women in government at any given time; often there were none. There was no concept of affirmative action to correct that.

As for constitutions, Nepal has had four in my lifetime. These were supposed to be broader documents than the laws, but they too have always devalued women—so much so that Nepali citizenship has always passed on to children primarily through men, not women.

My very being as a Nepali woman is constructed out of a hatred of women.

When I turned eighteen I obtained my own citizenship through my father, not my mother.

If I’d had children I wouldn’t be able to confer citizenship to them.

I’ve never in my life been an equal citizen of Nepal, because I’m just a girl, just a woman.

We thought, of course, that Nepal’s new constitution would change this, it being 2015. No other country in South Asia discriminates between men and women’s citizenship rights; only 26 other countries worldwide do. Nepal long ago ratified the UN’s Convention for the Elimination of All Forms of Discrimination Against Women. A young generation of Nepalis is forward-looking, progressive, embracing of social liberalism. So we really believed things would finally change.

By “we,” I mean Nepali feminists. As the drafting of Nepal’s new constitution got underway in earnest, a formidable team coalesced around lawyers such as Sapana Pradhan Malla and victims such as Deepti Pratibha Gurung. A network of non-government organizations, independent activists, and civic-minded individuals came together to form a feminist movement. They led the charge for equality. Likeminded Nepalis like me supported them.

Everyone knew that resistance to women’s equality would be stiff: all of Nepal’s major political parties, be they conservative, liberal, leftist, or radical, have consistently been united on one point: that equal citizenship rights for women threatens Nepali sovereignty.

For—in the mind of the Hindu patriarch—since women have no caste/nationality, their bodies are possibly traitorous, hosts to foreign babies, and—given Nepal’s open border with India—specifically to Indian babies. These traitorous female bodies have to be controlled for the sake of the nation; women must not be able to confer Nepali citizenship independently of men.

In the past few years Nepal’s feminist movement did everything short of taking up arms to change the minds of Hindu patriarchs. They put on demonstrations, rallies, and marches to the point of exhaustion. They sat at meetings with party leaders, with the president, the prime minister, the speaker of the house. They led awareness drives and media campaigns. They even went on hunger strike.

When all other arguments were exhausted, Hindu patriarchs returned to the same hateful argument: “It isn’t about women, it’s about the open border with India.” Nationalism beats, as a final refuge, in the hearts of Nepal’s Hindu patriarchs. Incredible as it sounds, they are ruled by a deep-seated xenophobia, a fear that Indian men will marry Nepali women, and the children—born of Indian seed!—will populate Nepal. Nepal will then no longer be Nepali; it will be Indian. “We agree with you,” Nepali feminists have been told. “But you have to consider our national identity.” If women are to be loyal to Nepal, we must accept unequal citizenship rights.

The new constitution, voted on by the Constituent Assembly on September 16, ignored the feminist movement altogether, and endorsed the logic of the Hindu patriarch. Not only can women not confer citizenship to their children independently of men, the children of Nepali women and foreign men will be barred from high office. No such restriction applies to the children of Nepali men married to foreign women. And Nepali men can, as ever, confer citizenship to their children independently of women.

News of this vote felt violent, like a slap, a blow, a punch to the gut. I spent days reeling, in shock, raging and impotent, bewildered and ill, thinking: a country that betrays its women doesn’t deserve women’s loyalty.

“Anyways, why does it matter to you? You’re not affected by this.”

I heard this from friends and foes, and there’s truth in it. I’m not directly harmed by this constitution, as opposed to mothers like Deepti Pratibha Gurung, who have tried repeatedly, and failed repeatedly, to confer citizenship to their children. Unequal citizenship rights will leave more than four million stateless in Nepal. This means they’ll have no recourse to government services; the stateless are intensely vulnerable. It’s true that by sheer luck, neither I nor anyone in my immediate family is in this position. My objection to the new constitution is purely ideological.

And yet it feels deeply personal, as though I’ve been dealt a psychic wound that won’t ever heal now. Perhaps my shock is a post-traumatic response to having my worthlessness—just a girl, just a woman—reinforced every day for all of my life. As I’ve grown older, and more confident, I’ve come to feel that being a Nepali woman is akin to being in an abusive relationship. The relationship in this case is with a state that holds our paperwork captive, and uses its power to humiliate, demean, and demoralize women, to keep us down.

It is not a matter of levity to burn the constitution of your country. For a writer, burning a text of any kind feels like sacrilege. In the days after the vote and before the formal promulgation of the constitution, I looked for arguments and counter-arguments for and against burning it. I read about B. R. Ambedkar burning the Manusmriti, the text that enshrines caste, and also gender, bigotry in Hinduism. After September 16, I followed the news of others in Nepal who were going to burn the constitution—in the Madhes, in Indigenous communities. I was hoping not to have to do so myself.

I was at the Jaipur Literature Festival at Boulder, Colorado, when, on September 20, President Ram Baran Yadav placed his final seal of approval on the constitution. There was a session on Nepal at the festival. I and the other panelists discussed the constitution.

Just beforehand, I’d gone to the banks of Boulder Creek and quietly, without ceremony, burned it.

The act felt funereal rather than defiant. I was mournful rather than angry. Something in me—hope, perhaps, for a better future for Nepal—had died. My loyalty had faded. “Mann nai maryo,” were the only words I could speak. The fire flared, blazed briefly, and flickered out. My emotions toward my country burned away.

What led to the violence in Motipur that left four people dead?

The clash between squatters and police on October 10 was the culmination of years of back-and-forth between the two sides but also at hand are wider issues of development and displacement.

Non-Resident Nepalis embody the diversity and pluralism of Nepal and its polity.