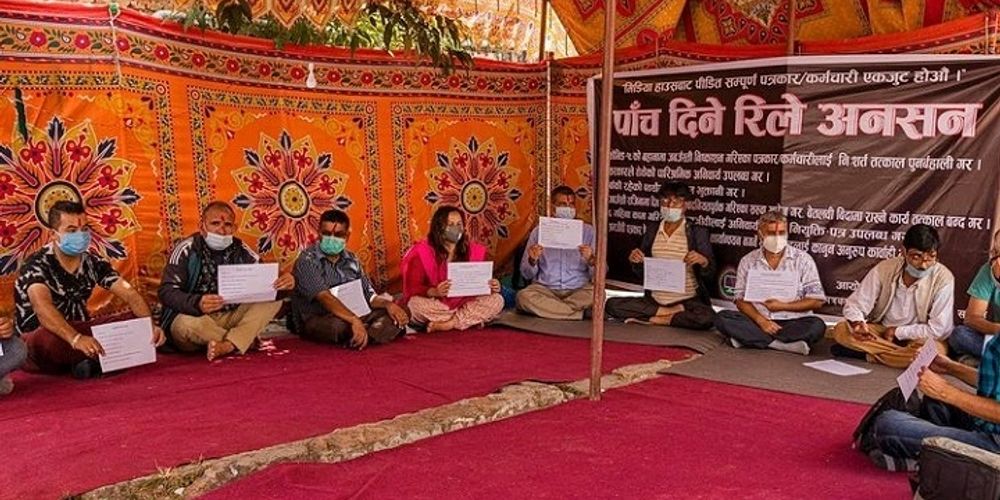 Sanjana had been working as a journalist for almost a year. She had been hired straight out of college and was comfortable working for Nepal’s biggest media company -- Kantipur Media Group (KMG). But on March 21, 2020, the Nepal government, in response to the spreading Covid-19 pandemic, implemented a nationwide lockdown and a week later, KMG ceased publishing the print editions of all its publications -- Kantipur daily, The Kathmandu Post, Nepal magazine, Nari and Saptahik weekly.

Sanjana, who asked that she be identified by a pseudonym, was told to work from home, like all other KMG journalists, for the digital edition of the paper. Two weeks later, on April 4, Kantipur and The Kathmandu Post resumed physical publication, but the future of Nari, Nepal and Saptahik were up in the air. KMG eventually decided to shut down Nepal magazine, laying off dozens of employees, including Nepal editor Basanta Basnet.

Fortunately, Sanjana was not among those laid off, but unfortunately, her salary was slashed by 50 percent. For six months, she worked on-and-off on whatever stories she was assigned, but in September 2020, she stopped hearing from her editor and also stopped receiving her salary. She attempted to contact her editor multiple times, she told The Record, but all she heard back was that she would be informed when the management took a decision.

“They didn’t tell me to find work elsewhere nor did they say that I would be hired back later. Every day, I was anxious,” she said.

Nearly a dozen journalists who spoke to The Record, not just from KMG, reported the same pattern of first having salaries slashed by up to half, then not getting paid with few explanations. After multiple failed attempts to receive word from the editorial leadership, many moved on to whatever other opportunities were available.

This was the experience of many journalists during the height of the Covid-19 pandemic in Nepal. The pandemic and the lockdown hit most major publications hard, as advertisements, the primary source of income, and stand sales both plummeted. Publications from most major media houses, including KMG, Nepal Republic Media, and Himalmedia, stopped printing -- at least for a while. Others, like Naya Prakashan and Annapurna Media Network, reduced the page count of their broadsheets and put out slimmer versions. Most media companies slashed salaries and laid off employees, pushing many journalists, who don’t make very much in the first place, into financial hardship.

“If these companies were startups then yes, there might not have been enough to sustain their employees. But for legacy media houses who have been running successfully for decades, how can we believe that they don't have money?” a former journalist for The Himalayan Times told The Record.  “The owners drive cars that cost Rs 10 million and then they tell us that they don’t have any money. Are we fools?”

According to a national survey by the Nepal Press Institute, out of 1,134 journalists surveyed from across the country, 74 percent reported financial difficulties with 38 percent reporting pay cuts and 6 percent losing their jobs.

On October 1, 25 journalists from Annapurna Post, The Himalayan Times, Nagarik, Republica, Rajdhani, and Karobar staged a protest against mass layoffs and reduced pay. They alleged that their employers were exploiting the Covid-19 crisis to treat them unfairly. Their demands were elementary -- assurance of the Rs 24,375 minimum wage mandated by the government; payment of unpaid salaries; permanent appointments for those who’ve worked for more than six months; implementation of the Working Journalists’ Act; an end to forced leaves and transfers; and action against media houses that fail to abide by the law. But a week or so into the protest, the journalists called it off, reporting threats of blacklisting by their employers.

Dharmendra Kumar Karn, a former political reporter for Karobar who led the protest, told The Record that despite the intervention of the Federation of Nepali Journalists, many still remain laid off or unpaid.

According to an August 2020 report by Freedom Forum, a rights organisation, 40 journalists from KMG were asked to stay on ‘forced leave’, 65 from The Himalayan Times were asked to stay on partial pay, while many others reduced salaries by 50-60 percent. Over 3,190 active journalists, out of around 8,410, from all around the country lost their jobs just amid the coronavirus pandemic and the consequent lockdown.

During the course of the pandemic, over 570 complaints were filed with the Federation of Nepali Journalists, most revolving around being laid off, asked to go on forced leave for months, and being underpaid. Out of those complaints, about 80 percent have been resolved after dialogue between the employers and the journalist, said Ram Prasad Dahal, secretary at the Federation of Nepali Journalists. The remaining 20 percent are pursuing legal channels for redress.

Among the 80 percent, some have been rehired by their employers while others have moved on to other publications or other fields of employment.

A Republica journalist told The Record that he left the publication after not receiving his salary on time multiple times. He moved to The Rising Nepal, the government mouthpiece in English, but quit that job too after having his salary slashed.

With the worst of the pandemic seemingly over, media houses have resumed normal operations, with staff back in the offices and print editions regularly published. But many journalists have yet to recover from the financial strain imposed by the pandemic and their loss of incomes.

“The situation of Nepali journalists has not yet been completely taken care of, even though many media organisations have resumed their operations,” Taranath Dahal, chief of Freedom Forum, told The Record. “Ten to twenty percent, a significant number of journalists, continue to fight for their labour rights.”

According to many of the journalists who spoke to The Record, these issues would’ve been resolved much earlier if the management and the editorial heads had simply communicated clearly with their staff.

“We think they have the money and they have earned enough to sustain all of us despite the financial crunch,” a KMG journalist said. “A lack of transparency of revenue details and a lack of proper communication are the two main reasons why journalists suffered.”

This callous treatment stems from the fact that most media houses tend to treat their employees as dispensable. KMG journalists have long been embroiled in negotiations with the management over their minimum wage, which has yet to be met. As journalists need to present proof of minimum salaries in order to receive government-sanctioned press cards that allow entry into Singha Durbar, many had been facing difficulties in their reporting. Editors and senior reporters might be compensated well but most of the newsroom is underpaid. The pandemic only brought these issues to light. In one high-profile resignation, editor-in-chief Hari Bahadur Thapa left the Annapurna Post over differences with the management regarding the slashing of staff salaries.

But even for journalists who are back at work, all is not well. Most of the journalists surveyed by the Press Institute reported mental health problems due to stress caused by the pandemic and amplified by financial concerns. Some have been so affected by the experience that they have lost faith in their employers.

A former Republica journalist said that he was offered a full-time position and back pay for all the months he was unpaid, but he refused.

“The future would be unreliable,” he said. “If I go back, I am not sure that this will not happen again.”