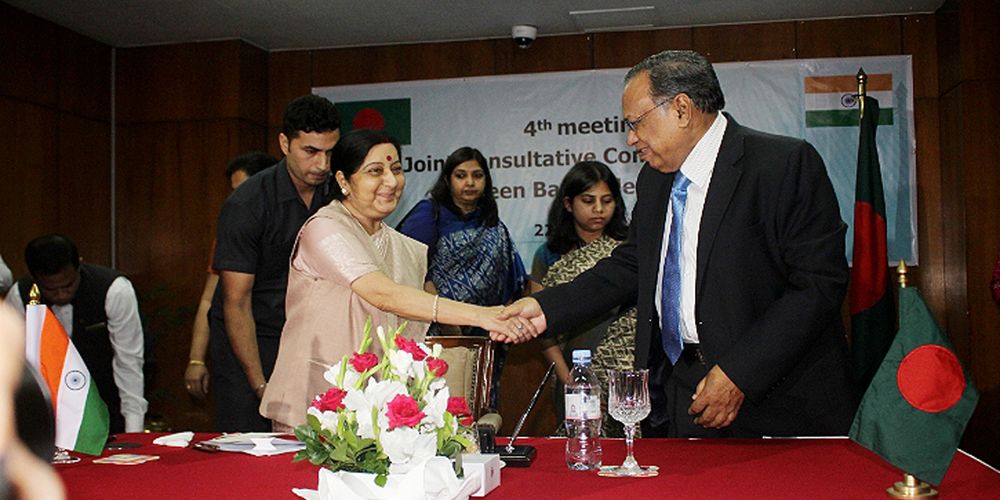 After Indian Minister of External Affairs, Sushma Swaraj, left the tastefully decorated conference room of the Pan Pacific Sonargaon Hotel in Dhaka on Sunday evening, journalists from different TV channels rushed in with their cameras and brooms to do their instant piece to camera from the lobby. Almost all of them began their segment with "Sushma Swaraj expresses grave concern about the Rohingya situation in Bangladesh..."

I was standing at a corner of the lobby with a veteran diplomatic correspondent from a national daily, watching this flurry of activity. "[Sushma Swaraj] didn't use the word 'Rohingya', did she?" asked my companion. I looked at the printed version of Sushma Swaraj's statement, from which she read during the press brief after co-chairing the fourth meeting of the Joint Consultative Commission (JCC) with her Bangladeshi counterpart A.H. Mahmood Ali. In the printed statement, I did not find the word 'Rohingya.'

Before the press brief, journalists were told by both the officials from the Foreign Ministry of Bangladesh and the Indian High Commission that there wouldn't be any Q&A session after the statements by the two ministers. Such ‘simplex’ communication by diplomats and policymakers has always frustrated journalists. The press brief after any JCC meet with India always takes place without the Q&A session.

A JCC meeting with India is a significant event. Important deals are inked, the progress of joint development programs get assessed, and long-standing unsolved issues like sharing of Teesta water or border killings are discussed in polished vocabularies between the two countries’ diplomatic teams. At this fourth JCC meeting that took place in Dhaka on October 22, asides from these usual topics, there was the pressing matter of the ongoing Rohingya crisis that Bangladeshi journalists were keen to hear Swaraj’s comments on.

India maintains a delicate balance between Dhaka and Nyay Pyi Taw over the fate of more than 700,000 Rohingya refugees who streamed into Bangladesh after August 25. And between ‘suave diplomacy’ and ‘pragmatic partiality’ India has chosen the former. Swaraj obviously spoke in tune with Prime Minister Narendra Modi, who during his Myanmar visit in early September, had refrained from using the word Rohingya—a disputed term in Myanmar. While the world focused its spotlight on the unfolding Rohingya refugee crisis, the Indian Premier shared ‘concern’ with the Myanmar government on ‘extremist violence’ in Rakhine province. Modi praised Myanmar’s State Counselor Aung San Suu Kyi’s leadership in his first bilateral visit to the Southeast Asian country, at a time when Suu Kyi—a nobel peace prize winner—had been falling fast into disrepute for her inaction in the face of state-backed cleansing of Myanmar’s Rohingya. In turn, Suu Kyi thanked Modi for India’s stance on the ‘terror threat’ faced by her country.

The noticeable absence of strong response in the Indian Premier’s public statement about the Rohingya crisis propelled Bangladesh to express unhappiness, and this in turn led to a recalibration of New Delhi’s statements on the Rohingya issue. However Modi’s statement limits room for future responses from his government’s Ministry of External Affairs, and thus Indian diplomats are left with the option of being crisis managers through ‘soft and vague’ diplomatic communique. So on Sunday, Swaraj, an articulate diplomat, conveyed an equivocal position by stating that “normalcy will only be restored with the return of the displaced persons to Rakhine state.” This statement, regarding the right of the refugees to return home, was the first such pronouncement from the Indian political leadership. Swaraj said that the situation had to be “handled with restraint, keeping in mind the welfare of the population” and she reiterated India’s standard position that the “long term” solution to the issue of displaced persons in Rakhine State was its socio-economic development. “We have also supported implementation of the recommendations contained in the Kofi Annan led Special Advisory Commission report,” she said.

Swaraj stated that India had launched ‘Operation Insaniyat’ in September to support Bangladesh in its commendable efforts to provide shelter in Cox’s Bazaar “to lakhs of displaced persons who have fled from Rakhine State of Myanmar.” According to Swaraj, through this operation, India has supplied essential requirements by way of parboiled rice, daal, salt, sugar, cooking oil, tea, milk powder, mosquito nets and soap to about 300,000 displaced persons.  However, she abstained from discussing India’s earlier statements that blamed the exodus on security operations by Myanmar, following the terror attack by Rohingya militants. She also didn’t mention any word about the 1993 agreement between Myanmar and Bangladesh according to which Myanmar had agreed to take measures that would halt the outflow of Myanmar residents to Bangladesh.

Later on Sunday night during her meeting with Prime Minister Sheikh Hasina at her official residence Ganobhaban, Swaraj said Myanmar must take back its nationals as there should be a permanent solution to the crisis. “How long will Bangladesh bear it? There should be a permanent solution,” Swaraj apparently told the Bangladesh prime minister, according to Hasina’s press secretary Ihsanul Karim.

Bangladeshi diplomats and experts on foreign policy have expressed mixed reactions to Swaraj’s statements and India’s stance on the Rohingya crisis. A top incumbent Bangladeshi diplomat, on condition of anonymity, told me that India had asked Bangladesh not to make Rohingya issue ‘the top agenda’ during the 4th JCC meeting. Perhaps that explains why AHM Mahmood Ali, the Minister of Foreign Affairs of Bangladesh at the press conference after the JCC meet brought up the issue of Rohingya in a more textbook diplomatic manner. He said Bangladesh was happy to be reassured that “India would continue to support the humanitarian cause related to Rohingyas in Bangladesh.” Ali thanked India “for humanitarian assistance provided to Rohingyas” and urged India to“[exert] sustained pressure on Myanmar” to reach a peaceful solution to the crisis.

Calling Bangladeshi Foreign Minister’s statement a ‘measured diplomacy’, former Bangladeshi Ambassador to the US M Humayun Kabir said that Bangladesh here had done its part on the diplomatic front. Kabir, who was once the Deputy High Commissioner of Bangladesh in India, said India needed to play a “balancing role” in its stance on the Rohingya issue. Unresolved, the Rohingya problem will poison the relationship between Myanmar and Bangladesh and inevitably, this affects India as well since both countries are vital for India’s security, bordering four and five Indian states respectively. Besides, Myanmar, which India used to criticize during the days of the Burmese junta, is now at the heart of the Modi government’s Act East policy. This policy is aimed at strengthening India’s economic ties with the rapidly growing economies of East and South East Asia. This includes the Myanmar-Thailand Asian Trilateral Highway, the Kaladan multimodal project, a road-river-port cargo transport project, and BIMSTEC, the Bay of Bengal Initiative for Multi-Sectoral Technical and Economic Cooperation, explained Kabir.

Dissecting India’s stance on the Rohingya, Prof Dr. Delwar Hossain, Director of East Asia Study Center of Dhaka University (DU) said a friendly Myanmar is important for India’s maritime security amid growing Chinese ambitions in the seas of the region. “India stepped aside from its decades-old policy of isolation and began to deal directly with the junta,” said Dr Hossain, “This is because as China’s profile continues to rise in India’s vicinity, New Delhi now would like to enhance India’s presence by developing infrastructure and connectivity projects in Myanmar.”

India’s recent plan to deport 40,000 Rohingya to Myanmar, however, drew outcry not only from the United Nations and human rights groups but also ultra-nationalists in Myanmar. The Indian Supreme Court had also called on the government to approach the Rohingya issue with a judicious mix of concern for national interest and humanitarian values. According to Dr. Hossain, instead of India focusing its efforts on expelling Rohingya, it would be better off ensuring that they do not become refugees in the first place, and that it should help create conditions for their safe return. “India has to realize that this ethnic conflict in the region is showing signs of snowballing into a pan-regional crisis, and time has come for a regional superpower to show some value-based diplomacy in tackling the impending crisis here,” he said.

“Rohingya Hindus are used here like pawns”: A Minority on The Chessboard

Faisal Mahmud  Faisal Mahmud has over seven years of reporting experience for three national English dailies in Bangladesh. He currently works for Bangladesh Post as Senior Correspondent. As a trained engineer who has completed his bachelors in Computer Science and Engineering, Faisal specializes in reporting and writing on telecommunication, financial technology and renewable energy. Faisal also has a keen interest in human interest stories and writes in-depth reports on several social issues. He is currently pursuing his MA in Journalism at Ateneo De Manila University (ADMU) in Philippines under the ACFJ Fellowship.