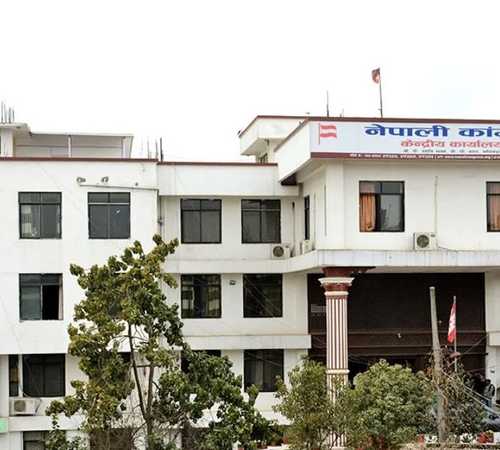 The Nepali Congress (NC) likes to call itself a democractic force. Its leaders never seem to tire of talking up the party’s glorious past and its proud leadership in struggles against the Rana regime, the partyless Panchayat, and the monarchy--all of which helped institutionalize democracy in Nepal. The party’s commitment to democracy and the rule of law has been the party’s central pitch to voters in all elections.

Yet, in reality, no political party in the country today looks more detached from democratic values than the NC. A textbook example of how not to run a mass-based organization, the grand old party seems to have lost all semblance of a respected political party, let alone a democratic force. The central leadership looks more like an amalgam of leaders representing various interest groups out of touch with the ground reality. The party machinery has turned near obsolete due largely to the protracted delays during elections conducted in the party’s sister wings. The party headquarters has become an echochamber, where unruly, power hungry leaders listen to no one but themselves. The cadres appear more dejected than ever.

Even more worrying is the NC’s disastrous track record as the main opposition. The country has never felt a greater need for a strong opposition to check one of the strongest governments in Nepal’s parliamentary history. But rather than raising a voice against widespread corruption and pointing out the Oli government’s lack of empathy for the common people’s suffering, the NC has been acting more like a sister wing of the ruling Nepal Communist Party.

To make matters worse, NC president Sher Bahadur Deuba, as a leader of the sister wings, has been constantly angling for his party’s share of  lucrative appointments including in constitutional bodies, foriegn missions, and other state organs,  while turning a blind eye to the corruption and misdoings of the government. Even as Oli has been widely criticized for his poor handling of Covid-19 crisis and has been undermining democratic values and civil liberties since he came to power some three years ago, Deuba, the chief of the main opposition party, hasn’t spoken out against them.

And to appease Deuba, Oli hasn’t taken any step that would go against Deuba’s interests. For example, even as all non-career ambassadorial appointees by the Deuba government were recalled, Oli didn’t recall Prativa Rana, Nepal’s ambassador to Japan. Rana is Deuba’s mother-in-law.

The situation overall is so absurd that dissidents within the ruling party appear to be more critical of the government than of the opposition.

With the NC’s 14th general convention approaching, it is only fair to guess that the main opposition’s troubles will not be resolved by the convention. There are already signs of a widening gulf and polarization within the party. Since last year, Deuba has been swiftly consolidating power by setting up new departments, extending the mandate of existing ones, and issuing party membership to new party entrants.

Some factions are doing their best to check him.  On Monday, a faction led by Ram Chandra Paudel submitted an ultimatum to party headquarters, warning Deuba to annul all recent decisions or face a sit-in protest.

There is, however, little reason to believe that Deuba will budge. In recent months, he  has made it increasingly clear that he is ready to go to any extreme to bolster his support and retain his office for the second term.

But some of his confidants, such as Bimalendra Nidhi, have in the past, warned that they would not  support him in the upcoming elections. And leaders like Nidhi and a host of others have also projected themselves as candidates for party chief.

Just before the end of his tenure last year, Deuba, amid pushback from dissident factions, amended the party statute, extended his tenure by a year, and announced that the party would hold the 14th general convention from February 19 to 22 next year. It's still unclear whether the election will be held on the stipulated date given that the party is already behind schedule in distributing membership to new cadres and renewing existing ones. The delays in membership distribution have led dissident factions to suspect that Deuba might be trying to enroll his loyalists en masse at the eleventh hour.

Deuba might still be the most powerful leader in the party, but the road to reelection does not look smooth for him. He has lost significant support among the fringe factions and independent leaders who were instrumental in his rise to the party’s helm in 2016. Even his own faction appears to be in tatters, with vice president Bimalendra Nidhi publicly projecting himself as the party’s next president. The two main dissident factions--led by Paudel and Krishna Prasad Situala--his rivals during the 2016 election for party helm,  appear to be cozying up.

But although their combined strength could shift the balance of power, the dissident factions have to first overcome many challenges if they want to oust Deuba: they need to address the internal division in their ranks and the clashing ambitions of major leaders. Paudel, for example, is not the only one raring to have a crack at leading the party. Shashank Koirala, Shekhar Koirala, Prakash Man Singh, Bimalendra Nidhi, Krishna Prasad Situala, and  Ram Sharan Mahat have also expressed an interest in the party's presidency. As a result, they have not been able to agree on a consensus candidate to challenge Deuba. The power struggle in the dissident camps is likely to give plenty of opportunities to the five-time prime minister to exploit the dissatisfaction to his advantage.

Will the other leaders manage to oust Deuba? It’s too early to tell. What can be said, however, is that the power struggle within the NC is likely to get more intense in the coming days. That will keep the opposition party even more occupied with trying to resolve its internal mess and less invested in performing the duties of the main opposition.

A hawker hangs on to dwindling hope