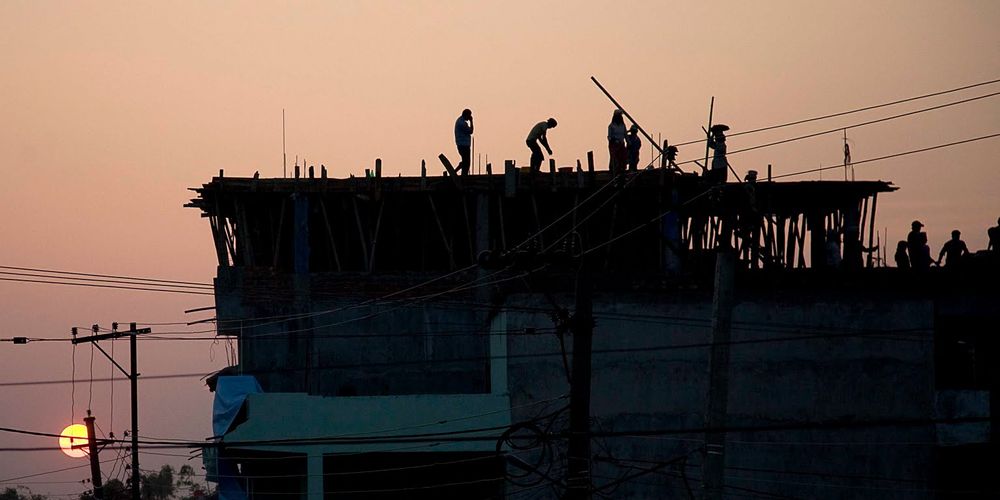 This is the third in a three-part series on the issues facing Nepal's indigenous ethnic groups. Read the first part on police harassment here and the second part on problematic conservation practices here.

The question of what kind of development Nepal wants has gained increasing urgency as more and more people risk losing their homes, land, and livelihoods to development projects. Hydropower projects such as Upper Marsyangdi-A in Lamjung, Kabeli-A in Panchthar, and Khimti-Dhalkebar in Sindhuli; the Sunsari-Morang irrigation project; and the proposed Sapta Koshi High Dam are just a few examples.

Let’s take the 220 kV Khimti-Dhalkebar Transmission Line for instance. The World Bank approved funding for the project in 2003. Construction on the project remains stalled due in part to community resistance. The project covers 16 VDCs and one municipality in five districts. Locals in the area say the project was designed without adequate consultation with them. The proposed transmission line was to pass through schools, homes, agricultural land, and historical sites and would displace many families. As in most other hydropower project areas, the affected households largely belong to Janajati and Dalit groups. When the locals learned about the potential impacts of the project, they rose in protest and demanded a halt to project activities. The government then sent security forces to threaten and suppress them. Some community members reported that the police detained them in their houses during the construction of the towers. Others, including several women, were severely beaten.

In July 2013, over one hundred affected families filed a complaint with the World Bank’s Inspection Panel with the help of the Lawyers’ Association for Human Rights of Indigenous Peoples (LAHURNIP). They said the project violated not only the their right to free, prior, and informed consent but also the Bank’s safeguard policies. The panel took up the complaint. The panel team visited the project site and found that the communities had not been given adequate and accurate information about the design and implementation of the project. Many had been deliberately misinformed. In some areas, the transmission towers were found to be alarmingly close to dense settlements. The team also observed that children from two schools would likely be passing and playing under the line on their way to school.

The report of the Inspection Panel states that all members of indigenous groups, “without exception,” voiced their disagreement with the project “because of its adverse effects on their community, their livelihood and their ethnic identity.” There had been no meaningful consultation with them regarding the project and its impacts on their lives. While the project did hold a few meetings, they were “held together with different groups and non-indigenous communities where they (the indigenous peoples) could not adequately express their concerns.” Women in particular had no say because the meetings were conducted in non-local languages. The affected indigenous people told the panel team they had been living in the area for generations, cultivating their small plots of land for subsistence. The project’s impact on the land would worsen their situation. They were not interested in cash compensation because their livelihoods depended on land. Further, the report states:

They said that it is easier for non-indigenous groups living in the area to accept cash compensation because they do not have a similar history of attachment to their land. They feel that their ethnic identities, including their languages, are under threat due to displacement caused by the Project. They stressed it is important for them to decide as a community about their lands so as to protect their identities and their livelihoods.

The panel team concluded that the project could cause “existing and future harm of a serious character” by destroying people’s livelihoods and further impoverishing them. It then recommended that the World Bank conduct an investigation that took into account all the issues raised by the community members.

But this was not what the mainstream media told us. In fact, one rarely sees a news story in Nepali media that does not cast local communities as villains in a conflict over land, forest, or water resources. On December 11, 2013, a news report in Republica implicitly blamed the locals for refusing to give up their land for the Khimti-Dhalkebar project, adding that the Nepal Electricity Authority (NEA) officials were now discussing a “a new scheme” that would be enforced as a law “to do away with the problem in [sic] land acquisition.” A few months later, Nepali Times reported that the project had been in limbo due to “extortion” by the locals, or “oppositionists.” The same report also grudgingly revealed, in passing, that the World Bank “has admitted that there may not have been enough consultation with locals before the work began” (April 18­–24, 2014). Meanwhile, a report in The Kathmandu Post quoted Mukesh Kafle, NEA’s managing director, as saying that since the World Bank is obliged to respect the local people’s concerns in all their projects, “we are planning to use our own measures to expedite the construction of the transmission line after the WB pulls out” (December 22, 2014).

Apparently the government has lost no time in coming up with its own measures. In February, The Kathmandu Post reported that the Cabinet has endorsed a new land acquisition policy that will allow the state to appropriate land without having to gain the consent of all the people living in the area (February 28, 2015). Under the policy, if 75 percent of the people in the area agree to accept compensation, then the 25 percent who refuse to give up their land will be rendered non-entities. The government will also be entitled to acquire land on behalf of private sector investors.

Nepal’s marginalized people cannot win in this unequal battle. On one side you have the rulers of the state, security forces, multilateral donors, business executives, and corporate-owned mainstream media. On the other, are communities who are not even allowed to raise their voices when their homes, fields, and livelihoods are destroyed.

Who can deny that Nepal needs small-scale hydropower projects to solve the chronic shortage of electricity? It is also true that a range of intermediaries, including political party cadres, have sought to use the locals’ resistance to certain projects for their own benefit. But it is one thing to demand a more democratic, transparent, inclusive, and humane model of development. It is quite another to demonize anyone who questions the design of such projects as “anti-development,” “extortionist,” and “a threat to the investment climate.”

Perhaps it is not a coincidence that those who propose a “good investment climate” as a solution to all of Nepal’s problems are also the ones who oppose a federal state structure that will guarantee the local communities’ right to protect and use the resources in their homelands. Their fears are not entirely groundless. Imagine how the time-honored equations will change if the historically excluded people start deciding how to use their land, forests, and rivers.

Cover photo: Laborers work at sunset to finish the construction of a new building. Erik B. Wilson

The new census attempts to provide disaggregated data all the way to the local level but concerns remain over the government’s capacity to pull it off without compromising quality.