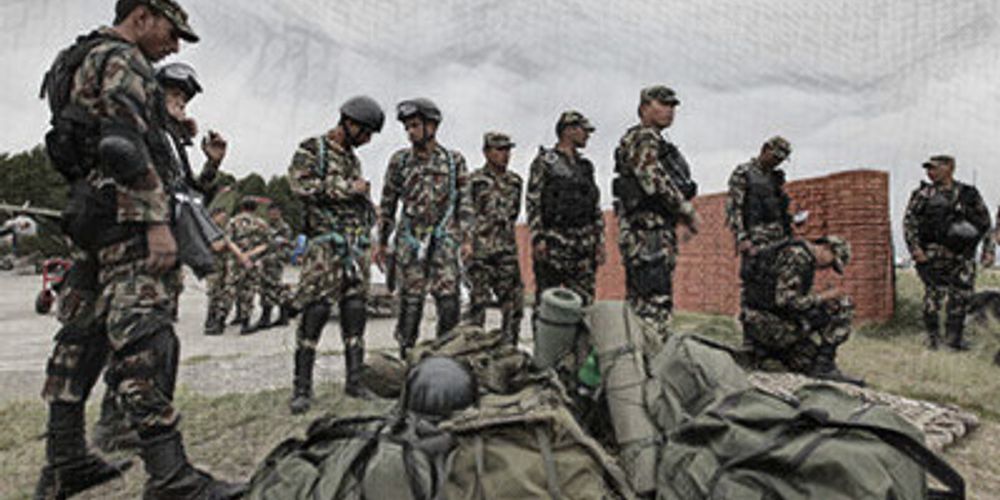 After handling several mega infrastructure-related projects as a national contractor, the Nepal Army (NA) is now looking to expand its presence in the investment sector. On July 15, in an effort to facilitate this expansion, the army forwarded a draft bill on the Army Act-2006 to the Defence Ministry, demanding legal permission to empower itself as an investment-oriented institution. While the political class remained silent on the army’s legal encroachment, top army officials summoned a group of selected journalists at their headquarters over the weekend to help disseminate the news.

Apart from its role in ensuring national security, the Nepal Army has, in recent times, become increasingly involved in national-level developmental projects for which it has faced media and public scrutiny. The proposed amendment will allow the military organisation to enjoy greater financial autonomy, marking a drastic departure from its traditional role. The implications are troubling — the army will be making more income through mainstream business ventures, while lack of transparency within the organisation will continue to obscure the way in which the income is distributed. The army’s changing role in the economic and development sectors have been facilitated, to a great extent, by the help of political leaders who have turned a blind eye to the army’s growing influence.

Section 5 (t) of the Army Act clearly defines the terms under which it can run a welfare fund. As per the act, ‘welfare planning’ encompasses income generating activities which support welfare for army officials. This term includes infrastructure and service-oriented projects, stakes in financial institutions, loan provisions and investment in institutional shares. But the act clearly states that the army may do so “provided that it does not make such an investment as a promoter.”

The aforementioned section, therefore, bars the army from acting as an investment promoter. Many see the draft bill, which proposes to change this, as a move against prevailing legal provisions. Given the army’s interest in investing billions of rupees accumulated through its Welfare Fund into hydropower and other development projects, a legal clearance to become investor-promoter will allow NA to utilise its funds to make more profits. The draft bill is currently under consideration at the Defence Ministry. So far, the ministry has not spoken publicly about it.

As per the most recent annual report presented by the army, the Welfare Fund has risen to NRs 51.66 billion from last year’s NRs 37.57 billion. The Welfare Fund was established in 1975 with an initial capital of NRs 12.49 million. It has maintained itself through contributions from Nepal Army personnel deployed in UN peacekeeping missions abroad, annual interests from fixed deposits, fees collected from students enrolled at the Nepal Army Health Science Academy, income generated from in-house guest services as well as commercial ventures such as fuel stations, canteens, schools and colleges, among others.

Apart from these, the army handles major infrastructure and road projects including the contentious express highway connecting Kathmandu with the Madhes. It also runs military hospitals in Kathmandu, Nepalgunj, Itahari and Pokhara and has plans to build hospitals in all seven provinces. Additionally, it has schools and colleges in Kathmandu, Pokhara, Dharan and Surkhet with plans to expand to major cities across Nepal.

Read also: The changing faces of the Nepal Army

Profit generated from all these projects is in the hands of the army, and how it is distributed or utilised is the prerogative of its leaders. Consequently, the army which is entrusted to safeguard the country’s sovereignty, territorial integrity and national unity is slowly turning into a for-profit institution. The proposed bill will allow NA to bypass its usual method of generating profit through interests from bank deposits by directly investing in high value projects. It has already shown interest in investing in at least three hydropower projects — the Bhimdang Hydropower Project in Manang, the Dudhkhola Hydropower Project in Solukhumbu, and the Madi Hydropower Project in Rolpa — in their initial phases.

The army’s proposal to seek an investor’s role, however, has already drawn strong criticism. Many fear that allowing the army to invest levy collected from several junior-ranking officials for profit-making ventures will ultimately erode its professional and institutional integrity.

According to experts, while investments of billions by any institution in a developing country like Nepal can be viewed optimistically, maintaining transparency remains a major challenge, especially given the Nepal Army’s track record. “This can be seen as an investment opportunity. But real contributors are not getting anything,” said lawmaker Deepak Prakash Bhatta whose doctoral research focused on the Nepal Army.

“It would be better if the bonus pie was distributed between contributors since thousands of junior ranking officials have contributed for the initial fund,” Bhatta added. “But it may be difficult to maintain transparency while doing so, and the main spirit of the army — professionalism — may erode. These issues should be discussed within the army as well as the parliament.”

Despite being aware of the army’s legal encroachment and wrongdoings, both political and bureaucratic classes have failed to intervene. According to a retired defence secretary, politically well-connected top army officials often influence politicians and bureaucrats in order to cover up wrongdoings and financial irregularities.

“Enticed by financial incentives, the defence minister or secretary never goes against what the army proposes. If any secretary dares to speak against such irregularities or refuses to work as per the army’s wishes, they can easily get transferred,” said the former secretary seeking anonymity. “And I have heard that if you agree to what they say, you will get rewarded splendidly — whether it be in the form of a new house or other goodies.”

In fact, the army’s penetration in the political circuit is so deep that no politician dares to hold the army accountable or demand transparency. Even former Maoist leader Puspha Kamal Dahal, who had strongly demanded the democratisation of the army shortly after entering mainstream politics, has stopped pointing fingers at the army, especially since his government was ousted over a row relating to the appointment of a new army chief.

Read also: Why is the Nepal Army above corruption law?

Due to its close political ties, the Nepal Army is still beyond the jurisdiction of the nation’s anti-corruption body, the Commission for Investigation of Abuse of Authority (CIAA). Army officials are rarely booked on corruption charges, despite the parliament’s commitment to bring the army under CIAA’s jurisdiction. Instead, through a recently amended CIAA bill, the anti-graft body has spared both the judiciary and the army from its ambit. At the same time, it has proposed to bring the private sector under its jurisdiction as part of efforts to expand its scope of investigations.

Given that the Nepal Army wishes to take on a more profit-oriented role by investing in both public and private sector ventures, it remains unclear how keeping it outside CIAA’s jurisdiction helps serve the anti-graft body’s agenda.

Why does rape have a low conviction rate in Nepal?