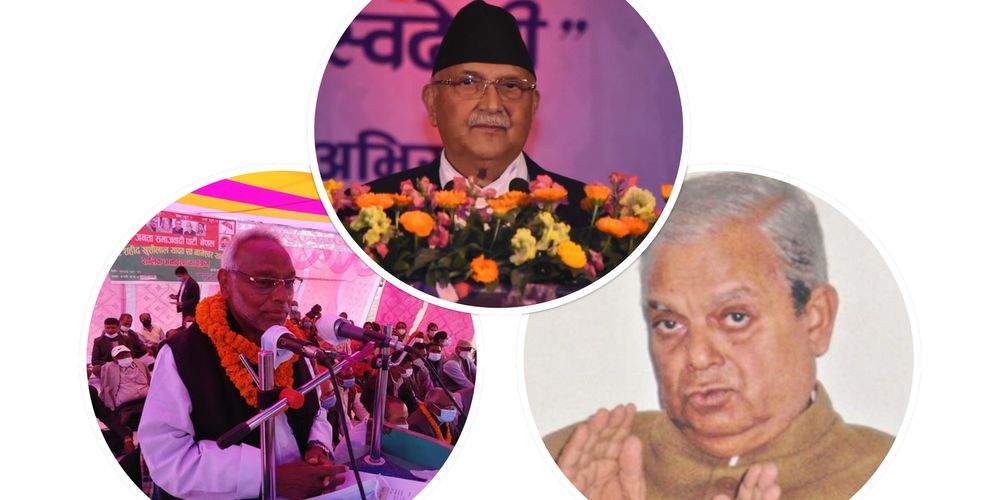 KP Sharma Oli is treating the country as his personal fiefdom. Aided by a rubber stamp president, Oli has incinerated the constitution, held the country hostage with his political shenanigans, and busied the media around him and away from the raging pandemic. He has hollowed out space for criticisms, pushed the opposition into a corner where they risk being politically shut out for the first time since Gyanendra Shah’s coup, and turned back the clock on all the progress the country has made since 2006.

Even as Covid-19 death tolls hover around 1,200 each week, the prime minister has done little to bolster the country’s health care system; instead, he has circumvented constitutional clauses to remain in power. As he criminally pushes the public to the samsanghat during the pandemic, he has also placed the constitution on a ventilator, as the country plausibly stares at an autocracy. The ongoing political crisis, abetted by a puppet president, is the crescendo of Oli’s consistent apathy towards the Constituent Assembly-endorsed constitution and towards federalism.

No leader in this century has pulverized the people’s aspirations as Oli has. He has spoken out against secularism, made a mockery of federalism, especially during the pandemic, and whipped up nationalistic rhetoric, impeding the mainstreaming of minority issues. He has essentially toyed with a faction within his group, opposition parties, constitutional experts, elected representatives, the Supreme Court, and the public to get what he desired for the past six months: fresh elections. Even as the raging pandemic threatens to push those already deprived further into poverty, Oli is determined to hold onto power.

If he wants the House dissolved, he goes ahead and does it; if he wants to seek a no-confidence vote, he does it; if he wants other parties to prove a majority, he generously offers them 24 hours to do so. Every political action he takes concerns himself and his own position, a tell-tale tenet of an autocrat. Everything has to be about him.

Oli’s moves can no longer be considered ‘desperate’. The road to autocracy seemed never as straightforward as it is now. In the past two years, media houses have constantly blared warning signs of Oli’s overreach and his aversion to dissenters, including his party people. By jokingly providing a semblance of legality and constitutionality to his moves, Oli has not only shown how the constitution and its various prerogatives are up for grabs but that they can be usurped with ease as long as the president is an ally. In doing so, he has provided a template for future nationalist demagogues.

The power dynamics between Oli and other leaders are visibly stark. After being played for six months since the first Parliament dissolution, opposition leaders have again taken refuge at the Supreme Court to serve them justice, which is not guaranteed. By citing the high positivity rate of Covid-19, Oli could easily call for further extensions to the current lockdown to prevent the opposition from demonstrating any show of strength. This has already come to pass in the Kathmandu Valley, with chief district officers tightening the lockdown and threatening anyone caught out on the streets with a fine and a jail term.

The opposition is not off the hook either; the ineptitude of its leaders for the past four years only facilitated the rise of this unhinged demagogue. The country’s dispassionate political culture -- where a few entitled hill upper caste men have an almost unspoken agreement to ‘share’ the premiership -- created fertile ground for an adventurous, power-hungry person like Oli to ascend and monopolize the game.

The JSP and the Madhesi agenda

The Janata Samajbadi Party (JSP) has now made an entry into this equation with its own demands and historical grievances. One JSP faction, led by Mahanta Thakur and Rajendra Mahato, thinks they can exploit a thoroughly discredited and seemingly desperate prime minister to fulfill its demands. But they forget that Oli is no ordinary prime minister. An ethno-nationalist at heart, Oli is only the figurehead of an ultra-nationalist clique that trembles before words like ‘reservation’ and ‘progressive citizenship’, and fears a Madhesi takeover. Thakur and Mahato probably think that if they have Oli’s blessing, all other moderate and progressive voices will automatically fall behind them.

Associating with Oli may produce some tangible outcomes for the JSP in the short term, there will be long-term consequences for the party. A wide section of Madhesis still detests Oli for his history of anti-Madhesi remarks. And even if Oli, after passing through all constitutional hoops, is able to conduct elections, it is unlikely that the Madhesi populace will reward the JSP for siding with the flatland’s foe and the country’s wannabe dictator.

Traditional parties have ignored the Madhesi agenda for so long that these demands have seemingly evaporated from public consciousness. Madhesi leaders want to pass an amended Citizenship Bill, secure the release of political prisoners and cadres, publish the 2015 Lal Commission report, redraw provincial boundaries, and increase their representation in the National Assembly. Among these demands, the ‘caretaker’ government recently passed an ordinance to amend Nepal Citizenship Act. The passage of the ordinance was a precondition for the Mahato-Thakur faction to join the government. As per reports, the faction is seeking as many as 10 ministerial berths to placate its faction members and those who have absconded from the rival Upendra Yadav-Baburam Bhattrai faction.

After the fulfillment of some of its demands, the JSP faction is rewarding itself with access to power, even if that power comes at the heavy cost of its own ideological undoing and the larger threat against other structural gains, such as secularism and federalism. By associating with the autocratic Oli, the Mahato-Thakur JSP faction also risks alienating democratic voices from the plains and the emerging coterie of hill supporters who want state transformation and social justice -- the party’s potential future vote bank.

The longer this caretaker government holds, the JSP (at least a faction) will carry heavy baggage on its way to the polls. Civil society and the recently reinvigorated opposition have both accumulated enough vigor against Oli’s -- and President Bidya Bhandari’s -- series of unconstitutional moves that they may not let JSP’s actions go easily. The JSP may not want to be on the wrong side of history.

While the JSP faction deserves criticism for its political choices, Madhesis are coming to terms with the reality of their position in the country as their leaders are singled out and face a barrage of online abuse with clear racial and ethnic slurs and overtones. The situation demonstrates the kind of respect that Madhesi leaders command in the country. As long as they toe a nationalist line, such as in the case of Kalapani, Madhesi leaders receive praise, but if they pursue marginalized communities’ agendas, they receive vitriol and accusations of being proxies for foreign powers much quicker than when the other mainstream parties do the same thing.

Associating with the most regressive political force, possibly since Mahendra Shah, the Mahato-Thakur JSP faction risks undoing all the progress Madhesis have fought for, including federalism. The paranoia and xenophobia around the citizenship ordinance tellingly demonstrate that Madhesis were never viewed as equal citizens as much as they were viewed as security threats. This moment, when hill racism has resurfaced and racist remarks are replete on the comment sections of social media, is reminiscent of the eve of the Madhesi Uprising of 2007. Nothing has changed substantially, and in fact, the few changes, however small they might have been, are on the verge of being undone.