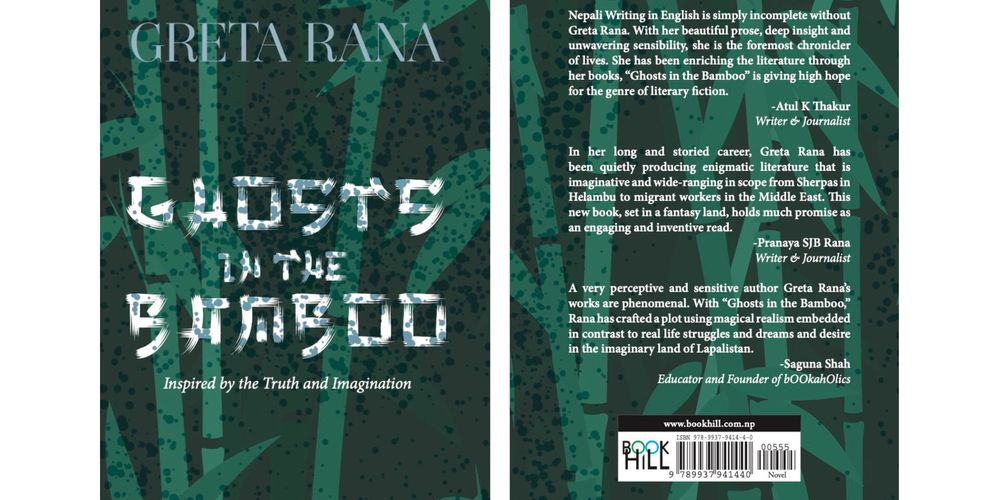 It wouldn't be an exaggeration to say that English writing in Nepal is incomplete without including the works of Anglo-Nepali writer Greta Rana. With her beautiful prose, deep insight and unwavering sensibility, she is a chronicler of beautiful stories and has been enriching Nepal's literary fiction with her work over the years. Her latest novel Ghosts in the Bamboo only adds to the genre.

Set in the fictional country Lapalistan, the satirical novel is the story of an aspiring playwright Elinor Kittivane who works as a nurse. The titular character too is a storyteller, and the inspiration behind her stories are the conversations she has with the ghosts of her mother and grandmother in the bamboo grove in her garden.

But as the story unfolds, she discovers she has a tumor behind her ear, and she starts questioning whether the ghosts of her mother and grandmother whom she talks to are real or a figment of her imagination induced by the tumor.

Written remarkably, the book is a humorous, yet poignant, account of a woman’s journey into her own psyche. How she works her way through her own maze of a mind is the crux of Rana’s latest novel.

Rana was born in Yorkshire, England, and moved to Nepal with her husband Madhukar SJB Rana (economist, policymaker and Nepal’s former finance minister) in 1971. In her decades-long career in Nepal, she has written seven novels and seven poetry collections, with her last published novel being Hostage (published by Speaking Tiger in 2018). In 1991, her short story, The Hill, won The Arnsberger Internationale Kurzprosa title. She is also a founder member of PEN Nepal and a former Chair of International PEN Women Writers’ Committee.

Rana was also a part of the International Centre for Integrated Mountain Development (ICIMOD) where she helped establish a publishing and outreach division 24 years ago. Her contributions place her among the pioneers of Nepal’s literary scene who contributed immensely in bringing literature to readers and let their plots inspire the plots of books. A truly significant interface.

Rana’s committed interest in children’s education, especially underprivileged children, also led to the founding of the New Shakespeare Wallahs, an amateur drama group working under the auspices of the Nepal-Britain society to raise resources for children’s education amongst the poorest communities. Brief periods of residence in Laos and Afghanistan in the late 70s and early 80s, besides her time in Nepal, have given her a unique outlook on what the author refers to as ‘colonization by development aid’. And her experiences and perspective have shaped the fictional country Lapalistan in her latest book.

This book is the first of the Lapalistan Series, which will include two other books: Picking up the Pieces and Guests in the Country. Featuring the lives and existential challenges of everyday people, through effects of magical realism in the author’s signature narrative, the three books will further enrich Nepal’s literary universe in due course.

“Picking up the Pieces is the third in the series, and deals more frankly with the 'colonisation of development aid'. It brings our characters to 2003,” said Rana.

Her humane worldview enables her to think very freely and liberally about other countries too and her unspoken accord with the places where she lived in and witnessed the challenges of humanity come together in her writings. Such a level of silent commitment is inspiring.

Rana’s life in Nepal and her writing career have been a remarkable journey. Her literary contributions are a perfect example of how deep the works of fiction can make interfaces with marginalised communities and peoples. Her ability to depict the grim realities while not allowing hope to fail is something that makes her a leading voice for the voiceless. Her new novel is a continuation of her remarkable journey as a writer. It should be read and preserved.

Confirming that Nepal’s literary scene is just not evolving but blossoming despite the grave operational disruption caused by global Covid-19 pandemic, Rana’s new novel is published by BookHill, a Nepali publisher. The book is a major entry in the literary fiction category of not just Nepal but also South Asia—and the publication should support the resolve to make Nepal a regional literary hub.

While the Indian market will continue to be a main publishing destination, Kathmandu is certainly emerging as an alternative for authors who want to explore the readership and relatively easier distribution facilities back home.

All in all, Rana’s latest is an elegant work of literary fiction which deals with issues of gender, deprivation, and development through a beautiful touch of magic realism.

Ghosts in the Bamboo

Atul K Thakur  Atul K Thakur is a writer, columnist and policy analyst with focus on the interface of politics and economics in South Asia. He can be reached at [email protected]