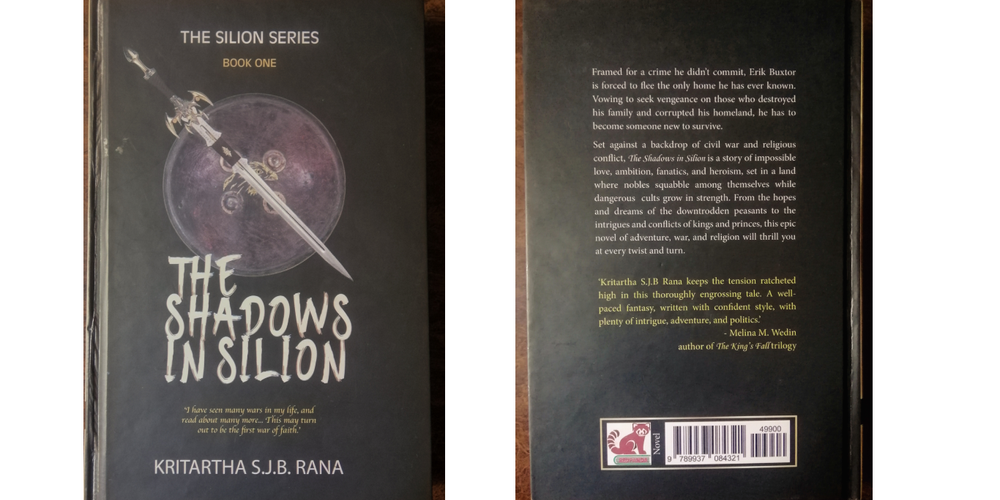 Tongue carved out and head in a noose: it was definite that the entire village of Billege bore witness to the hanging of Erik Buxtor for the murder of the highest-ranked family in the Holy House. What leads to his resurrection as an estranged warrior who punishes fanatics of a religious cult that carries out unspeakable atrocities in the Kingdom of Silion in the name of its God?

The debut novel by Kritartha SJB Rana, The Shadows in Silion: Book One, begins in the small village of Billege in the kingdom of Silion. The life of the protagonist, Erik Buxtor, comes full circle in the book as he returns to his village to punish the conspirators after being forced to flee, accused of a murder he did not commit.

After getting their hands on a letter with the royal seal, the antagonists of the story, the Forthwind father-son duo, spread fear across the kingdom in order to convert the Lugathian kingdom into their own faith, Kocithism. They take Princess Ariana of Billege hostage, hang the Lugathian dukes and counts in the Dark Forest, and position their black-robed army across the palace of the Capital city, Goldland. Erik meanwhile joins a rebel tribe and begins to gather an army of his own in the small village of Mirade. He joins hands with loyalists to the king and goes to war with his enemies.

This novel is part-medieval fantasy, part-war epic, which is certainly a first for Nepali writing in English. The book, however, falls short in many aspects that must comprise a good novel, debut or otherwise. In the press release that accompanied the book’s launch, Rana, who is a captain in the Nepal Army, states that it was challenging for him to devote time to literature as someone active in the military. I wouldn’t disagree, as the book appears to be a passable story written in quite a hurry.

The book, divided into 16 chapters, might not be a literary masterpiece, but it does fairly well in stating what is necessary to keep the story moving. The simple language and fluidity of prose are among the better parts of the novel. The conversations seem a little too brief and blunt towards the beginning but as the story progresses, the delivery improves significantly with the use of descriptions that help convey the atmosphere of the conversation. While the dialogues are well-paced, the narration often moves too fast, leaving the reader with little time to process all that has happened. This is especially true for the war scenes that are descriptive but filled with military jargon, which is not surprising given that the writer is an army captain.

While the plot moves steadily forward, there is little mystery as to what will happen next, as Rana provides numerous, very obvious hints as to what will come next. The reader barely has a chance to immerse themselves in the plot before what is ahead is revealed.

Erik Buxtor, the main character, is a young boy blinded by his desire for vengeance after being wrongfully accused of a crime by the ‘high-borns’. Despite the fact that Erik is a peasant fighting royals, there is almost no real conflict here, as things go unbelievably well for him in everything he pursues. While on the run as a fugitive, he finds a travel permit lying on the ground, and then finds a decent job the very next day. He begins training and soon prevails as a hero in that town, and that too because of a very large and fortunate coincidence.

It is characters like Erik that are most perplexing in The Shadows in Silion. Neither Erik nor the bountiful number of supporting characters are well characterized. I found myself unable to establish a connection with any of them. Rather than complementing Erik, the supporting characters are employed simply as markers on the path to his enemy. Instead of organically illustrating the personality of certain characters, Rana simply characterizes them physically and leaves it at that. Robin is “a skinny, golden-faced boy” with “a mischievous glint in his eye” while Nirm is “about the same height as Drexter” and has “a dark complexion”.

Characters who are made out to be major players come and go without much fanfare. The “best knight in the kingdom” exits the book in the first few chapters and does not return until the last battle. The queen is locked up for three years and does not even attempt to escape. The leader of the great rebel group is just a figurehead waiting for Erik to appear and take charge. In a way, all characters seem to be introduced as and when necessary to the plot and are then discarded when they fulfill their purpose. In the vast kingdom of Silion, most characters do not have a life of their own.

The much graver problem with the book concerns its extreme objectification of women. As a book set in medieval times, limitations on women’s freedom are understandable but Rana includes unnecessary episodes of violence towards women that do nothing for the plot. In one episode, a former duchess is raped in front of her daughters and then cut from head to toe by a tribal man. Out of nine supporting characters, there are all but two women in the entire book -- Misa and Ryia -- who have not been touched inappropriately or taken advantage of by men in power. Women being routinely violated as a matter of course is just very distasteful.

All the plot and characterization aside, even the editing of the book seems to have been completed in a hurry. There are ample spelling errors and typos, along with entire pages that have been jumbled up while binding. I was so amused to see Page 150 following Page 145 that I wasn’t fazed to see Ryia replaced by Riya on the same page. The cover illustration, however,  is sleek and could attract first-time readers.

The blurb on the book cover promises a story about a “war of faiths” but in truth, religion means little to most people in this story. It is a tale of the protagonist’s revenge and the antagonist’s failed attempt at capturing the kingdom of Silion through money and foul play. The tactics used by the two opposing sides are political with military strategies borrowed from the real world; the fantasy setting contributes little to this book.

The Shadows in Silion is the first war-fantasy book to be written in the English language by a Nepali writer. The book attempts to, but fails at, justifying its genre, given the broad and easy availability of fantasy novels from around the world. The story struggles to reel in the reader at the beginning and fails to provide an emotional payoff from the characters’ journey at the end. Perhaps if the book had been published 10 years ago, I might have celebrated it as a commendable beginning step, but today, it is just too far behind to be able to catch up.

The Shadows in Silion: Book One

The silences of history

The history of empty places

The acceptance speech of writer Yogesh Raj who received the 2018/2019 Madan Puraskar for his historical fiction, Ranahaar.