The wrong side of the thin blue line

The wrong side of the thin blue line 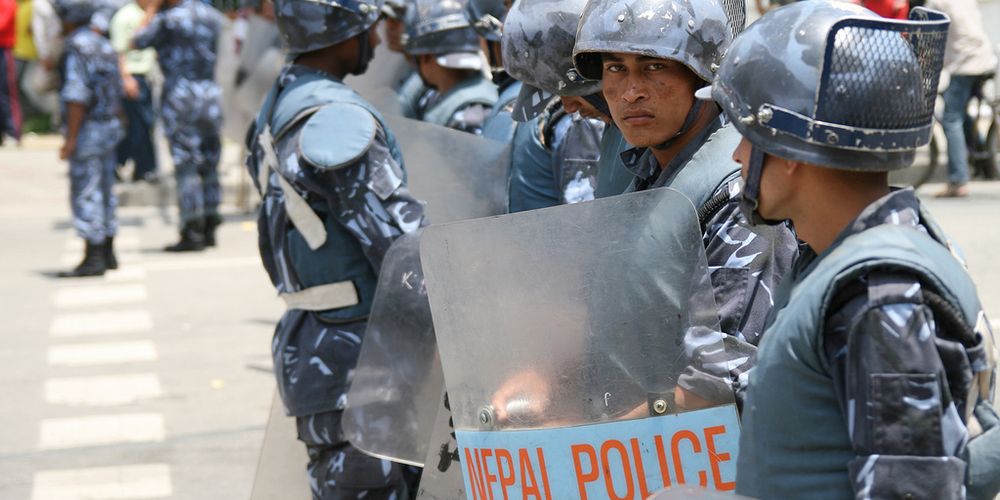 This is the first in a three-part series on the issues facing Nepal's indigenous ethnic groups. Read the second part on problematic conservation practices here and the third part on harmful development here.

On June 5, 2014, at around eight p.m., the police arrested Kumar Tumbapo, a father of six, from his home in Goldhap village, Jhapa for allegedly slaughtering an ox. They also arrested Bal Bahadur Tumbapo and Jagat Rai, who happened to be at his house that evening. The three men were kicked and beaten while being dragged and shoved into a police van. As it turned out, inspector Devi Prasad Poudel was responding to a complaint filed in the district court by Gauvansha Samraskhyan Manch (Cow Protection Forum), a Birtamod-based organization that has succeeded in getting many other Janajatis arrested on similar charges.

Kumar Tumbapo was harassed and tortured while in police custody. “You are the main culprit, you killed an ox and ate beef!” they said, and beat him with a rod until his feet were swollen.

At least eight such cases are documented in a recent report by the Lawyers’ Association for Human Rights of Nepalese Indigenous Peoples (LAHURNIP). The report, titled “The Glimpses of Indigenous Peoples’ Human Rights Violation in Nepal,” cites more than two dozen cases in which the state has violated the rights of people belonging to marginalized ethnic groups. The cases have been gathered from across the country since Nepal became a federal democratic republic. They document how the centuries-old process of exclusion and oppression of Nepal’s indigenous people continues to this day.

Since Nepal was declared a secular state, many people from Tamang, Rai, Magar, Bhotia, and other Janajati groups, as well as Muslims and Christians, have been arrested for alleged cow slaughter in districts across the country—Panchthar, Ilam, Sindupalchowk, Ramechhap, Gorkha, Jajarkot, and Kathmandu. In most cases, the accused were charged with killing a cow because they had consumed the meat of a cow that had died after falling from a cliff. The officers on duty and district court lawyers demanding action against them belonged to high caste groups.

The arrest of Dhondup Gurung of Dolpo was the latest in a series of similar incidents. A student monk at a Buddhist monastery in Kapan, Kathmandu, Gurung was returning from Dolpa after meeting his family, whom he had not seen in thirteen years, when he was arrested by police on suspicion of carrying beef or rare animal meat. He was carrying dried mountain-goat meat. The police seized his mobile phone and the NPR 1,03,850 in his possession. His fellow villagers had sent the money to pay their children’s school fees in Kathmandu. Gurung spent thirteen days in prison before he was proven innocent and released. According to Sey Namkha Dorje, president of Dolpo Sarokar Kendra, Gurung was emotionally and psychologically traumatized by the incident. His entire community in Dolpa was in shock. Dorje complained that Ramesh Mainali, deputy superintendent of police in Jajarkot, had been rude and unhelpful throughout the process.

In another reminder that orthodox Hindus remain a favored lot in secular Nepal, an area inhabited by Janajati families in Sunsari has gradually been turned into a place of Hindu religious retreat. The majority of people living in Ward No. 1 of Baraha Chhetra, Sunsari belong to Janajati groups. Many have been living there for generations. In 2009, Hindu associations backed by the state began occupying land in the area. According to LAHURNIP, the government provided funding (NPR 17 lakhs in 2011 and 12 lakhs in 2012) to one Balsanta of a Hindu religious academy to build a Sanskrit school on the land. In 2010, a man named Krishnadas Devacharya occupied 22 bighas of land to set up an ayurvedic treatment center devoted to promoting Hindu religious practices. A wall was erected and an iron gate built to fence off the land that Rai and Limbu families had been using as a cemetery. The new construction also took over the common playground built by the local sports council and the village development committee. When the locals protested, the government deployed security forces and continued the construction work. At least 23 families were displaced from their homes.

Last year the government carried out another demolition drive to build an irrigation canal in the area. Houses were bulldozed and hundreds of families were displaced again. But Balsanta and Krishnadas were left untouched. According to locals, politicians of every stripe, from Maoist chairman Prachanda to President Ram Baran Yadav to UML leader Madhav Kumar Nepal and Nepali Congress leader Sujata Koirala, have come to pay obeisance to the religious leaders at different times.

Not that this should surprise us. After all, the entire political establishment of Nepal, including leaders of the opposition, recently helicoptered to Baglung to attend the Birat Mahayagya, where Swami Kamal Nayanacharya reminded them they had made a mistake by declaring Nepal a secular state.

Cover photo: Nepal police during a demonstration in Kathmandu in May 2007. rpb1001/Flickr. Republised under CC license BY-NC 2.0.