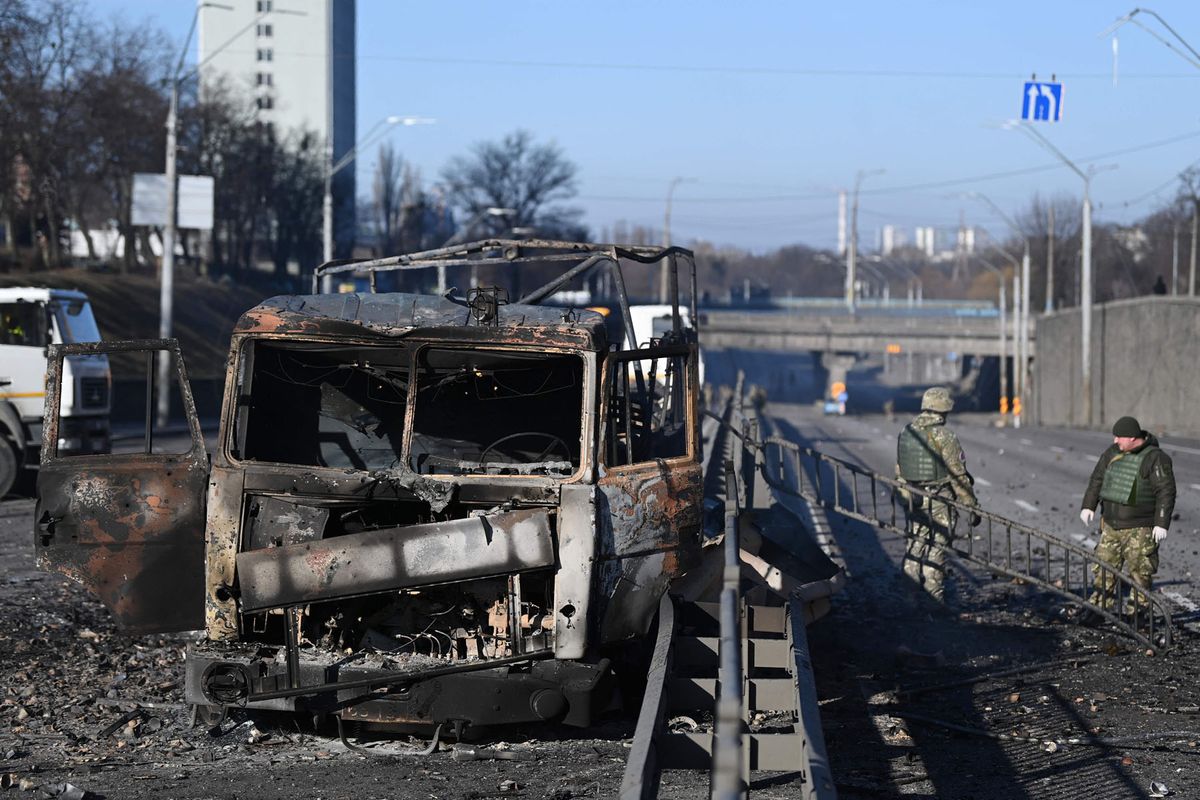 Ukrainian soldiers stand past a burnt Ukrainian army vehicle on the west side of the Ukrainian capital of Kyiv on February 26, 2022. (AFP/RSS)

The history of political tensions between the Russian Federation and the post-Soviet nation of Ukraine is decades old, endlessly complex, and soaked in the blood of thousands on both sides. The last decade or so especially has seen fears mounting that Russia, led in strategy by President Vladimir Putin, was preparing for a Ukrainian invasion. War became inevitable in February 2014, when, in the wake of the Ukrainian revolution, Russia invaded and subsequently annexed the Crimean peninsula. Still on-going armed conflict in the Donbas region of Ukraine officially signaled the beginning of the Russo-Ukrainian War.

In January last year, Ukrainian President Volodymyr Zelenskyy publicly urged the United States to allow the post-Soviet state to join NATO, considered the strongest intergovernmental military alliance in the Global North. Within a few months, Russia began deploying troops near its Ukraine-adjacent border while US President Joe Biden warned of severe sanctions on Russia. Escalating tensions led to French President Emmanuel Macron making a rare, ultimately unsuccessful diplomatic trip to Moscow aiming to reduce the likelihood of conflict. The situation finally came to a head earlier this week when Russia launched a full-scale Ukrainian invasion in the early hours of Thursday, February 24.

The finer socio-economic-geopolitical details of the event are difficult to gauge amidst widespread misinformation, propagandistic or otherwise, and new developments emerging every few hours. As a researcher of climate change, they are certainly out of the scope of my limited understanding. However, upon viewing the events as they unfold from my Kathmandu vantage point, there is one important element in the story that I believe is worth highlighting — that of fossil fuel energy dependence in an increasingly interdependent (and warming) world.

“After Hitler invaded the Sudetenland, America turned its industrial prowess to building tanks, bombers, and destroyers. Now, we must respond with renewables,” wrote American environmentalist Bill McKibben in an impassioned call to action he authored for The Guardian this past week.

The subject of energy surfacing in American discourse in the face of war is hardly surprising. President Jimmy Carter called for American energy independence from Asian exporters decades ago, famously hammering the symbolism home by installing solar panels in the White House. Every time tensions have escalated in the Middle East, American economists and political pundits have called for some form of energy reform.

In the face of Russia’s invasion this week, however, the prevailing narrative coming from America seems backwards. Russia is one of the world’s leading oil and gas suppliers. Its customer nations include the US. Key voices from the US oil lobby are urging President Biden to ease restrictions on environmentally harmful drilling to boost domestic supply. Countries in Europe, too, are planning to import more fossil fuel from the US to cut off Russian companies.

This all comes at a critical time in global energy markets. Gas prices have soared around the world, triggered partly by a resurgence in demand following depleted storage during Covid-19 lockdowns. Experts also speculate that prices may have been affected by Putin’s move against Ukraine, tightening supplies to major European nations. Europe depends on Russia for an estimated 40 percent of its gas supplies — a share predicted to increase as countries shift away from the relatively dirtier option of coal.

“Doubling down on oil and natural gas isn’t the answer… Neither is strict energy independence,” argues Sammy Roth writing for the LA Times. The key to escaping this conflict-fueled web of dependence on gas giants is to begin doing away with fossil fuels entirely, and that too as urgently as possible. The faster countries move on renewable energy, the better. I’m with Roth on this one. I’ll go even further to add that actively transitioning to renewables and decentralizing energy systems — globally, regionally, and nationally – should be a matter of national security policy for countries around the world.

The Russo-Ukrainian situation unfolding currently is a warning for countries heavily reliant on energy exports. Russia has, in the words of McKibben, a ‘pathetic’ economy outside of its energy products. Sixty percent of its exports are oil and gas. Money that enters the country through these channels is mobilized to power the Russian military complex. This may not be a war for energy, McKibben argues, but it certainly is one underwritten by energy — “a war whose most crucial weapon may be oil and gas, a war we can’t fully engage with because we remain dependent on oil and gas.”

To the uninitiated, Russia’s audacious invasion may paint a weak and ineffectual portrait of Ukraine. But that is far from the truth. Ukraine is the second largest country in Europe. It sprawls over 603,548 square kilometers in land area and is home to an estimated population of 44 million citizens. According to some reports, Russia may even continue to look further west in due time. This week’s events should not be simplified to the narrative of a wealthy country strong-arming its weak neighbor. Instead, they should serve as a stark warning of what can happen when economic power is centralized to the point where the powerful become unaccountable.

This concerning thought brings us to Nepal and other developing countries in the Global South. While the Russo-Ukrainian conflict may seem distant, even irrelevant from home — especially since we have our hands full with political controversies of our own at the moment — there is an important lesson here for emerging economies. Aggressive energy transition plans towards renewables can not only contribute to meeting climate change combatting targets, protect natural resources from degradation, and help control air pollution, but it can also prove to be a worthy long-term security strategy.

Thankfully, Nepal’s energy dependence is among the lowest in the world relative to per-capita income and economy size. Owing partly to its terrain being too difficult and expensive to scout for fossil fuels, no major oil, coal, or gas reserves are known of within its territorial limits. Nepal thus relies heavily on biomass sources such as wood, agricultural residues, and dung. Imported petroleum products such as kerosene and diesel account for a distant second, while imported coal ranks an even further distant third.

Nepal’s historical energy consumption, described as ‘medieval’ in a report recounting the power-outages that were common until 2017, is startlingly low. Much of this phenomenon is attributed to inefficiencies in energy storage and delivery systems. In the face of an unprecedented energy crisis, the government has spent the last few decades putting its might behind accelerating the development of Nepal’s hydropower potential. With improved energy management, leakage control, and expansions in hydropower since 2017, Nepal was reported to have recorded a power surplus, looking to export electricity in 2021.

By all accounts, Nepal has everything it needs to develop a self-sufficient energy sector. With rapid expansions in energy generating projects and consumption — doubtlessly to be further fueled by the freshly ratified Millennium Challenge Corporation Compact all set to boost electricity availability — the country should be careful about how its development projects are powered. Upcoming infrastructure projects, important as they are for the country’s development, should reflect a clear long-term transition towards full energy independence. They should also not be allowed to serve as distractions from the development of other forms of renewables such as wind and solar.

Are you in Ukraine and need help returning back to Nepal?