The Nepali garment industry once seemed like a promising avenue for industrialization, but it saw a rapid demise in early 2000s. Anthropologist Mallika Shakya’s new book, Death of an Industry: The Cultural Politics of Garment Manufacturing, Development and Revolution in Nepal, documents the processes that led to the fall of a once flourishing industry.

The ethnography weaves in one tapestry seemingly disparate ideas. It discusses the influences of social and cultural institutions in the industrialisation of Nepal, the developments in global political economy at the end of the twentieth century, and the disastrous consequences of allowing market forces to dictate trade and production. This brief boom to bust story chronicles the impact of Multi-Fibre Arrangement- MFA (a trade-apparatus designed by the USA to control global trade, especially to aid its trade-war with China) on Nepal’s garment industry. Established in 1974, it granted Nepal a generous “2.3 quota per capita which was the highest in South Asia.” This led to a boom in garment export from Nepal by mid 1990s, until the eventual expiry of MFA.

The MFA’s generous quota was a boon for Nepalese investors in garment industry. Some Indian investors also entered the industry mostly after the country was liberalised in 1980s through a series of policy changes called Structural Adjustment Programs (SAPs) which were  advocated for by the World Bank and IMF. The key policy changes were the privatisation of state-owned enterprises and trade liberalisation through elimination of import restrictions. The rationale of these policies, popularly known as neoliberal policies, were to promote free enterprise and curtail government intervention in the market, supposedly to promote economic growth.

These neoliberal policies that were meant to achieve economic growth in Nepal and also in other developing countries were ultimately responsible for MFA’s expiry in 2004.

“World Trade Organisation-WTO made the draconian announcement that… dismantled MFA permanently. This came in response to the reverberating calls from World Bank and IMF for a global free trade.” Ironically for Nepal, the policies that were meant to bring prosperity became the cause of one of its largest industry’s demise.

Garment Factory owners tried their best to abate the collapse of garment industry after MFA’s expiry. They lobbied with US legislators to ask for preferential treatment for Nepalese garment post-MFA expiry, performed rituals to end the dasha (bad fortune) and also used cost-saving methods. All the while, thousands of workers were losing their livelihoods and factories were closing down one after another. Public officials and development agencies who were supposed to come up with policy solutions, however, were mere onlookers. They did little to preserve the industry that at its peak produced about “one-fourth of all exports from Nepal and employed thousands of workers.”

It is not that the policy makers and development agencies’ hands were tied from introducing policies to help the garment industry survive or at the least provide relief packages for workers who lost their jobs. Instead their conviction that the industry was uncompetitive to begin with, gave them the rationale to avoid their responsibilities. It didn’t matter that a key industry was dying because they were indoctrinated in the neoliberal idea “which was reproduced endlessly in public media as in dinner talks: the supremacy of market forces over state regulation, and the legitimacy of the hegemony of productivity and competitiveness.” 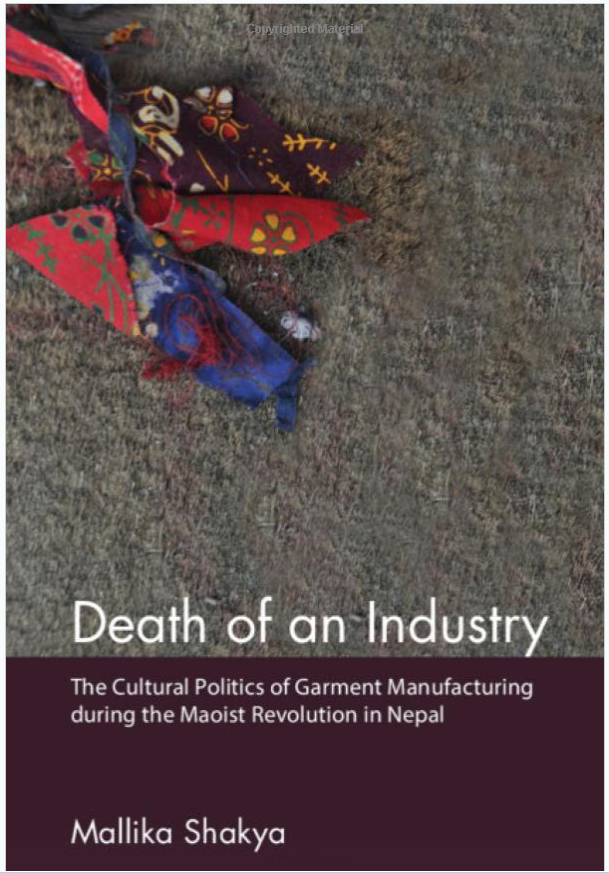 This fascination with market forces misunderstood “the garment ecosystem in Nepal, a long and messy process in which ethnicity, class and competitiveness morphed together to constitute a macro-social assemblage that steered normality.” This macro-social assemblage was prevalent everywhere in the garment industry. For instance, “Swakhan-Chemmu, a garment firm in Nepal, cultivated a friendly relationship with its Chinese fabric suppliers over many years, also persuading its buyer a London-based Jewish company which campaigned for Free Tibet to approve the sourcing of fabrics from China.” Such leeway was not given by the buyers to other companies. Similarly, A&E Boutique, a craft-garment producer “developed relational contracting with select group of embroiders, in as distant places as Kashmir, that had to stand the test of time on loyalty and trust.” The garment manufacturers in Nepal developed garment ecosystem benefiting from personal relationships and ethnic affinities and not just from competitive market forces.

These dynamics are not accounted  for by policies that obsess over the supremacy of market forces. Neoliberalism’s failure has been its ignorance of such social and cultural factors; especially in Nepal, with ethnic and cultural loyalties dictating market forces rather than the other way around. A single-minded focus on so called “market-based economic development” has reinforced the inequalities in the global capitalist system.

As such, countries like Nepal with “little agency in global politics” fall victim to the “double jeopardy of subaltern voiceless-ness and elite policy denial.” The promotion of market-based solutions dismantle key institutions in developing countries, and derail the possibility of producing “national capitalism.”