How will we remember 2020? The Record is republishing stories from a curated series of visual stories commissioned by photo.circle that presents the work of visual storytellers based across Nepal who began documenting their communities since the early days of the Covid-19 pandemic. In late March, when Nepal went into lockdown in response to the Covid-19 pandemic, educational institutions across the country were shut down. For four months, Nepal’s 8.2 million children were unable to attend school. Even before the pandemic, Nepal’s education system was already in crisis, with high drop-out and low graduation rates, sparse attendance, and insufficient resources. The crisis did facilitate the adoption of distance learning in schools across Nepal, but it hasn't been without its challenges. The pandemic shut down Mechinagar’s Dhulabari Higher Secondary School for three months in March. It was only in June that the school decided to conduct classes over the internet. For some students, the online classes brought back a semblance of routine and resumed their interrupted education, but others, especially those who can’t afford mobile phones, laptops or the internet, were forced to find different ways to adapt.

For Garima Niraula, 15, classes start at 9 AM. The ninth-grader jumps from Nepali classes to Social Science to Science, Mathematics, and Accounting. Other than during the 20-minute lunch break, she is constantly in front of the laptop. In the evenings, she works on her homework and sends it to her teacher via Facebook Messenger.

“If the internet goes off, I miss a lot, and I worry,” says Garima. But her family makes sure Garima is comfortable and has enough time for her classes and homework. “They pay the internet bill on time, they leave me alone to study and I don’t have to do household chores,” she says. 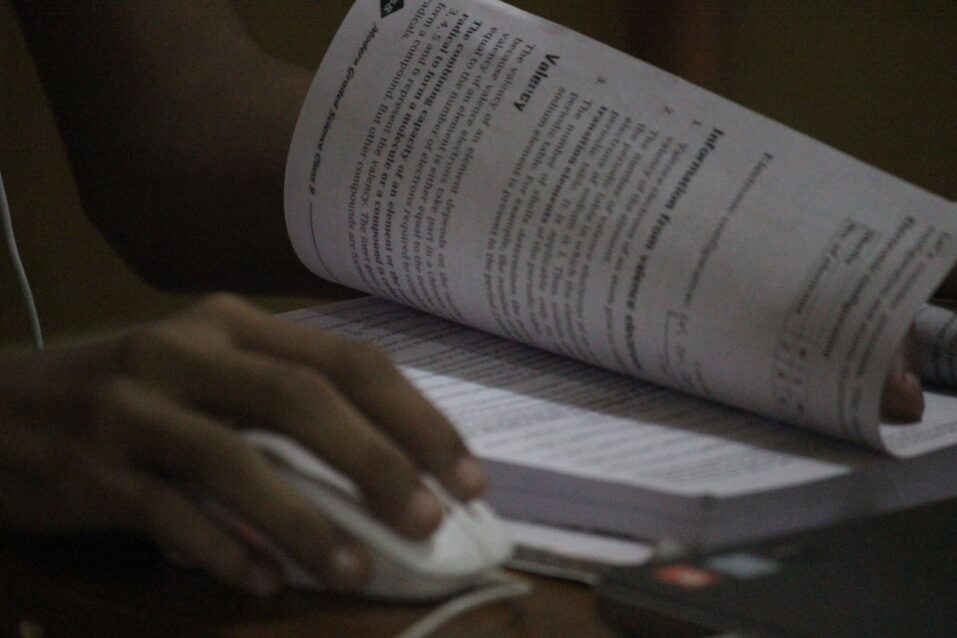 Over 650 students from grade seven to ten attend Dhulabari Higher Secondary School’s online classes. However, students from financially weaker backgrounds have not been able to attend these classes as they don’t have internet service or computers at home. 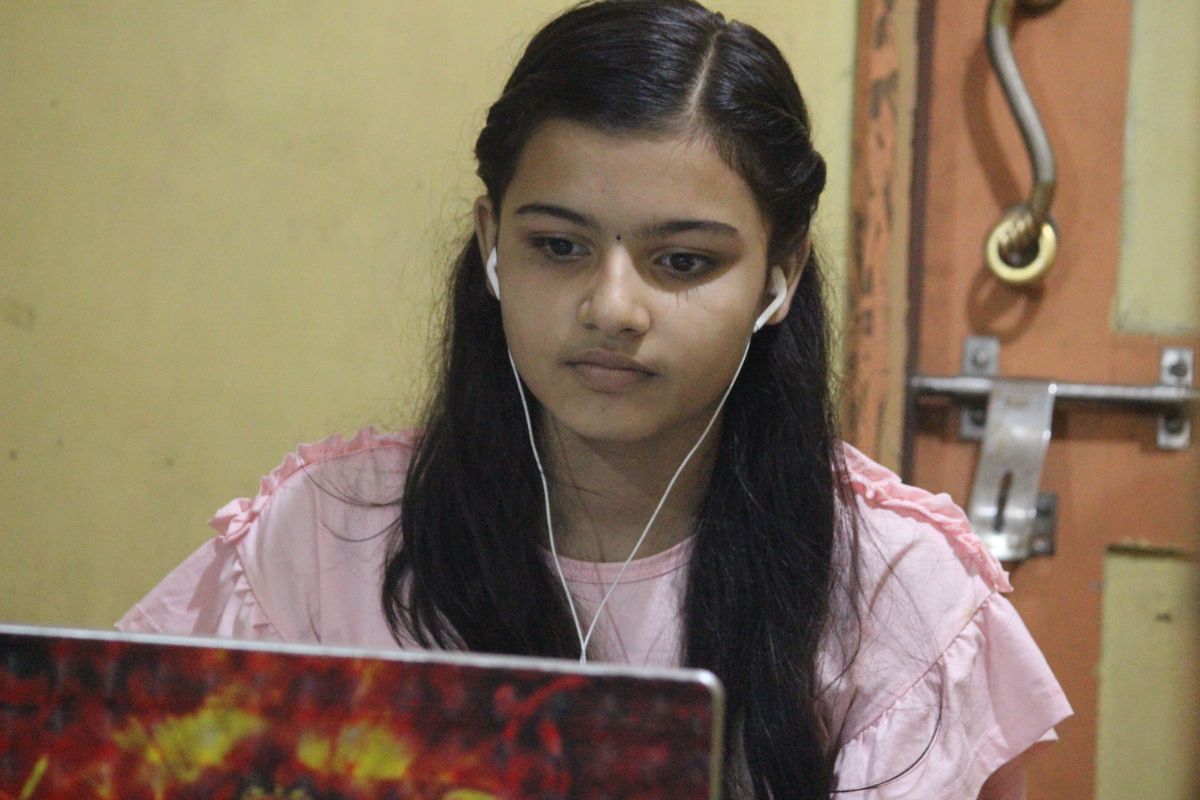 “I understand that I am lucky to get this opportunity. Some of my friends don’t get to study online like I do,” says Garima.

Radios fill the gap, but barely

It is 8:30 AM and Janaki Kafar, 16, of Mechinagar has just finished cleaning the local Hanuman Temple. At exactly 9 AM, local children gather around, set up jute mats, and sit. They pull out their notebooks, books, pens. Janaki turns on the radio and for the next two-and-a-half hours the students listen to classes delivered over the radio. 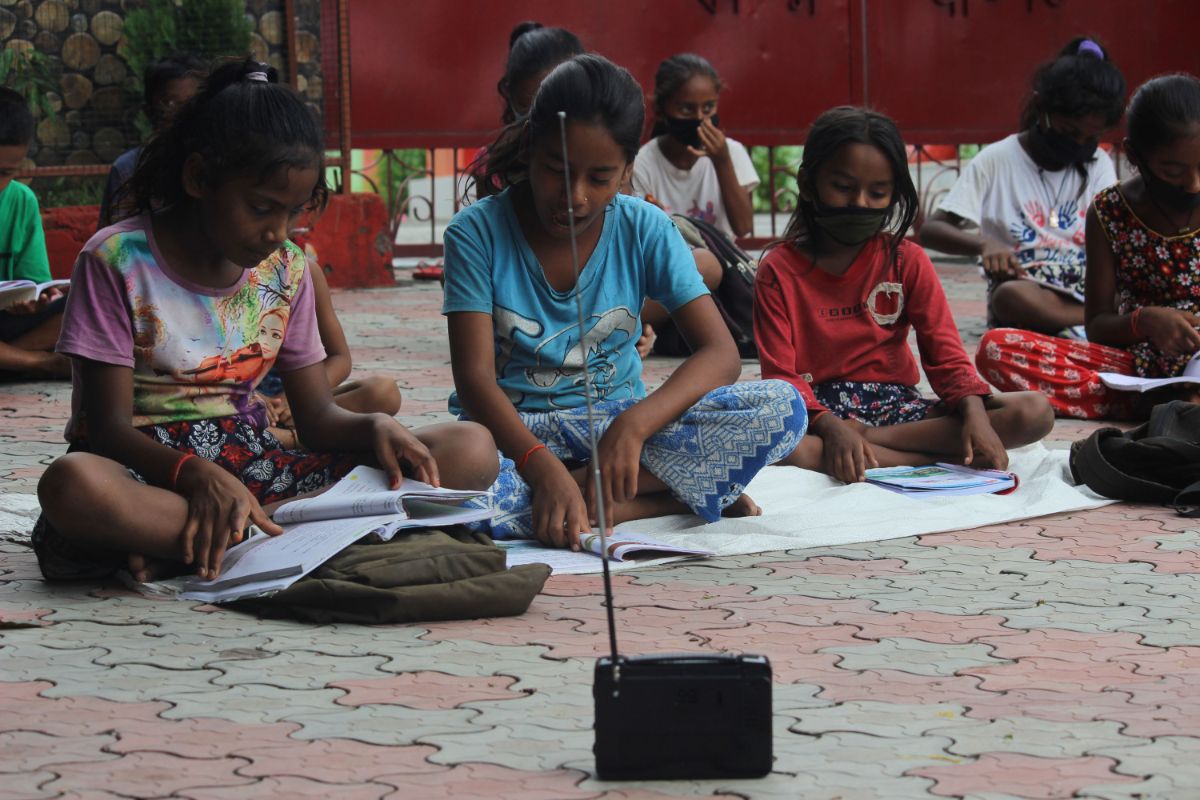 When the Covid-19 pandemic started, Dhulabari Higher Secondary School switched to online classes for middle and high school students, but Janaki has not been able to take advantage. “I don’t have a mobile or the internet,” says Janaki. Her family lives on the banks of the Tami River, and they have been struggling financially since her father lost his job due to the Covid-19 lockdown. “It is difficult for my father to even feed us,” she says. 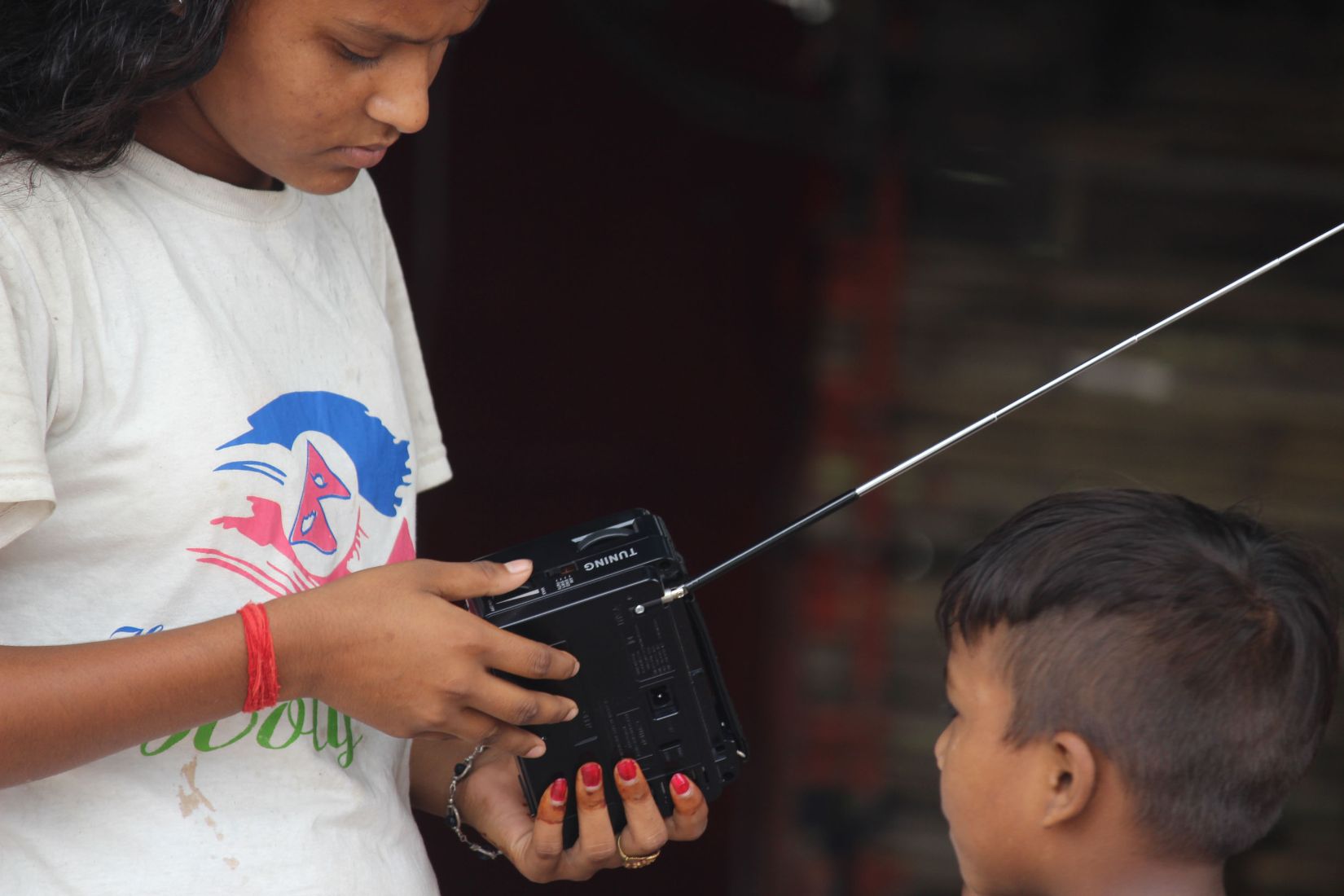 Janaki’s school understands that many of its students suffering economic hardships cannot afford online classes for their children. They’ve thus formed a group that has raised funds and distributed radios. “I really wanted to attend those online classes, but it is only wishful thinking,” says Janaki.  Rajkumari Sharma, parent to one of the students, says that while the school’s idea was good, it should have been better thought through. 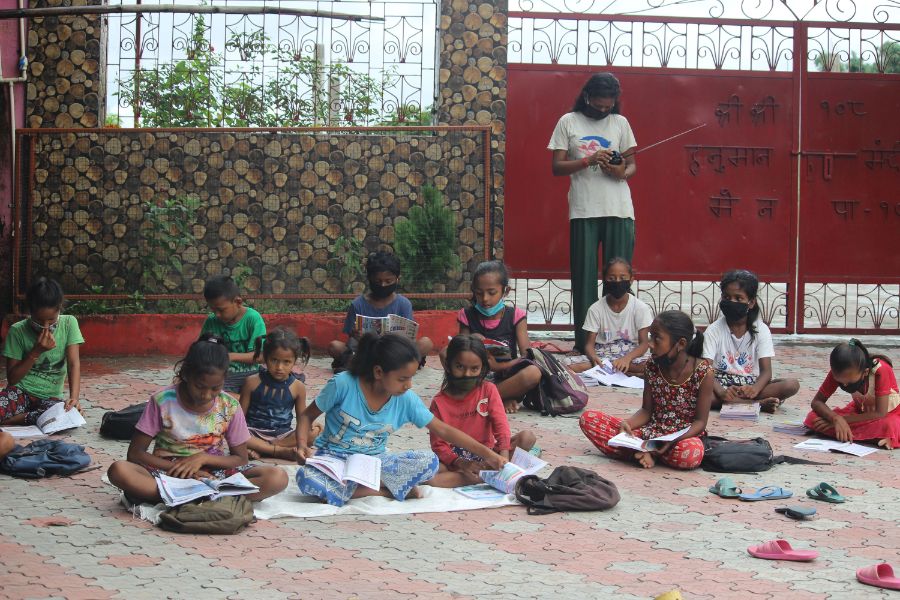 “It would have been easier if there was a teacher to guide the students along with the voice on the radio,” says Sharma. “For now, they listen and then they forget. I am not sure how effective that actually is.” That does not discourage Janaki. She is keen to learn, so every day, she finishes her chores early and sits down to listen to the radio and read along. Janaki’s motivation and drive is now inspiring 40 other kids in her neighbourhood to do the same.

For 20 years, Ramesh Kumar Dahal, 50, has stood in front of blackboards teaching the next generation. Lately, however, a smartboard has replaced the blackboard. When Dhulabari Higher Secondary switched to online teaching, Dahal decided he needed to adapt. 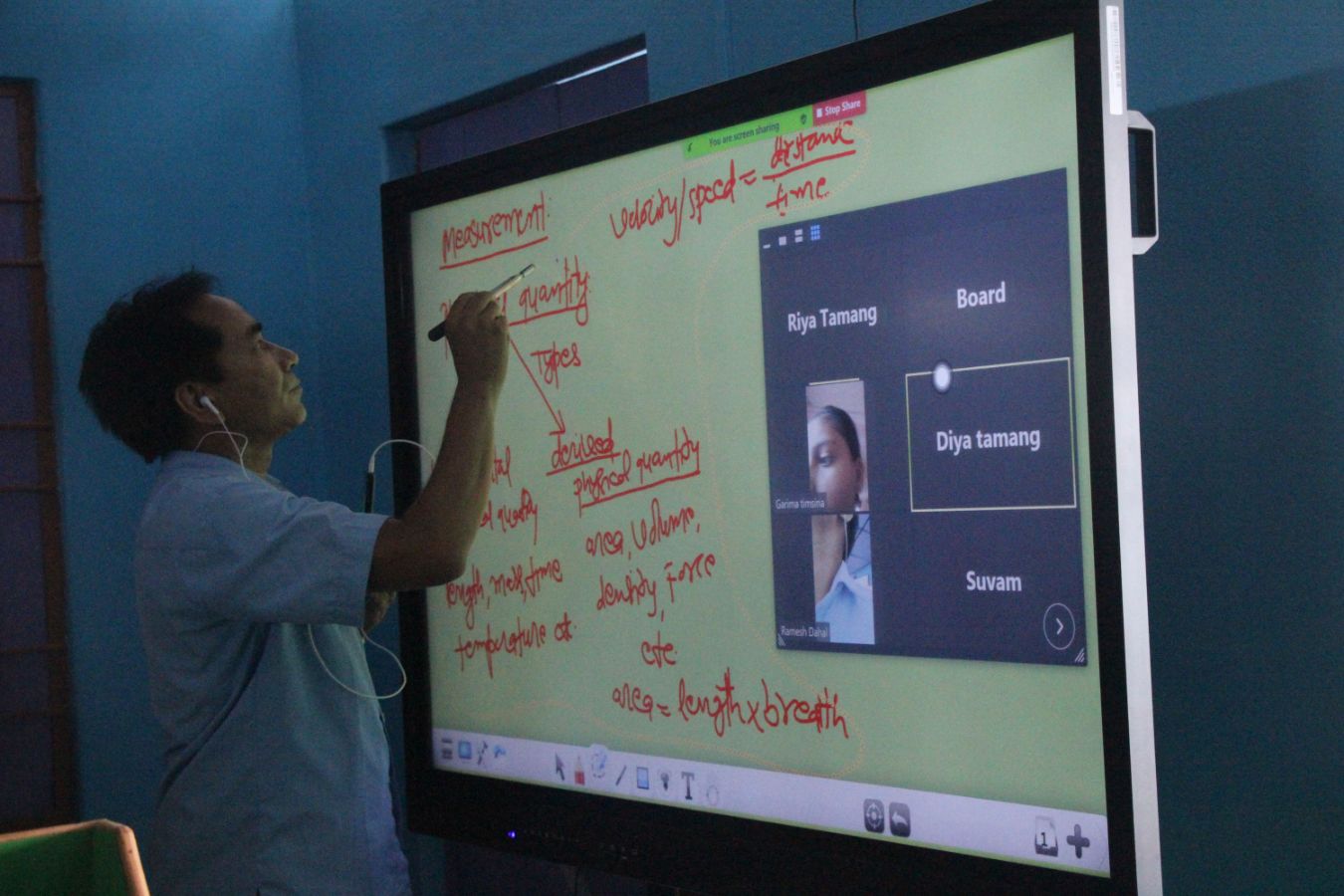 “I used to be scared of technology, but time and necessity change people,” he says. Every morning, Dahal arrives early to the school and prepares for classes and presentations. At exactly 9 AM, the classes start. The smartboard initiative was funded by the provincial government, which also provided basic training to teachers on how to use the smartboard.

While online classes were originally designed for all students, only those with an internet connection, a computer, or a smartphone have been able to attend. “This is not an equal system, and we are leaving the other students behind,” says Dahal. 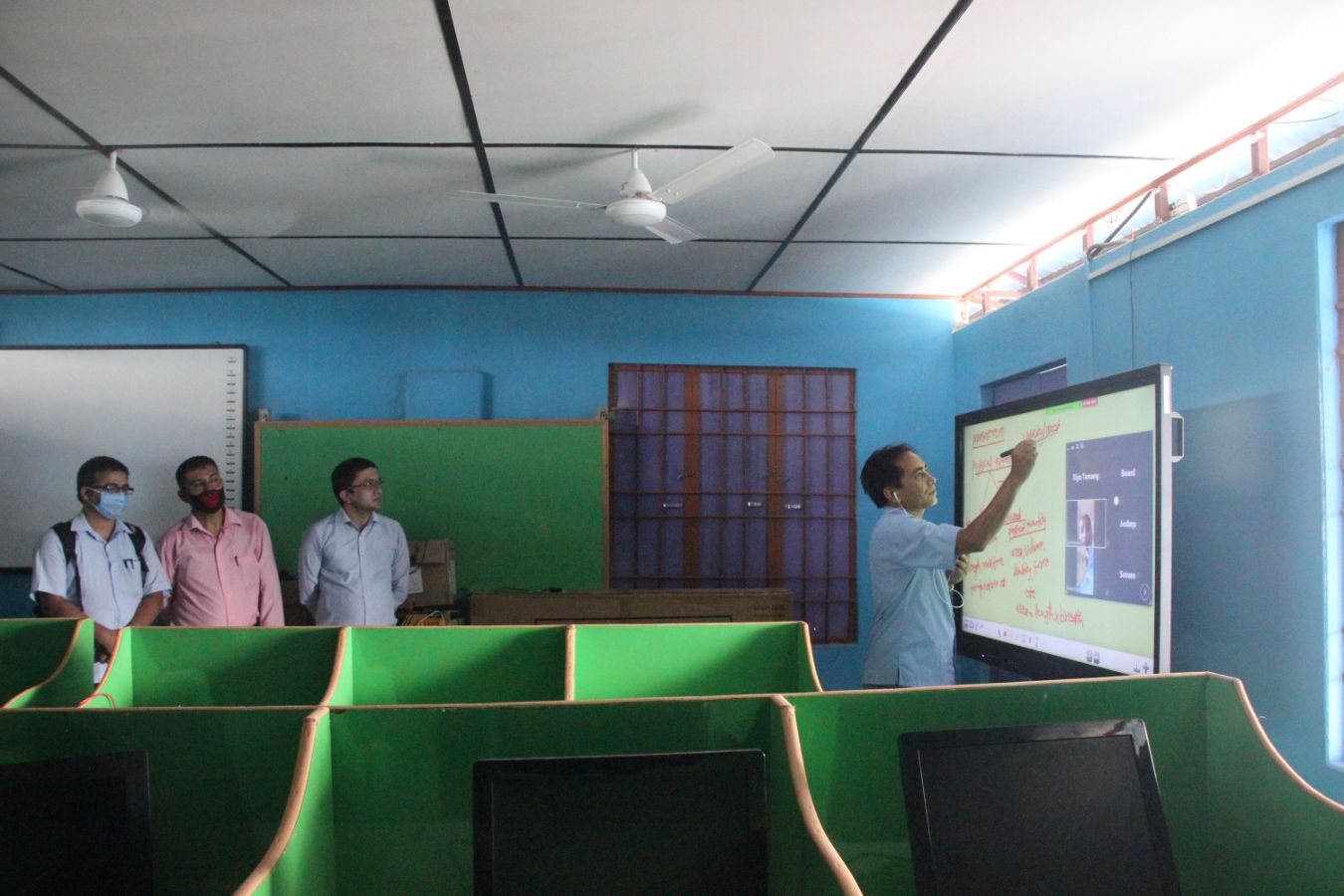 Damodhar Dhungel, who is also a teacher, has been conducting classes for those who cannot attend online classes via the local Radio Sathi station. He says that while the radio initiative is good, it comes with its own set of challenges. “It is hard to listen, concentrate, and follow a radio lecture,” he says. “And there is no one around to clarify when students don’t understand.” *This story was produced for the Nepal Photo Project with support from the photo.circle 2020 grant.

Parwat Portel  Parwat Portel is a journalist with Kantipur Media Group. This story was produced for the Nepal Photo Project with support from the photo.circle 2020 grant.