In Saptari, four Madhesi protesters are killed by the police within 24 hours 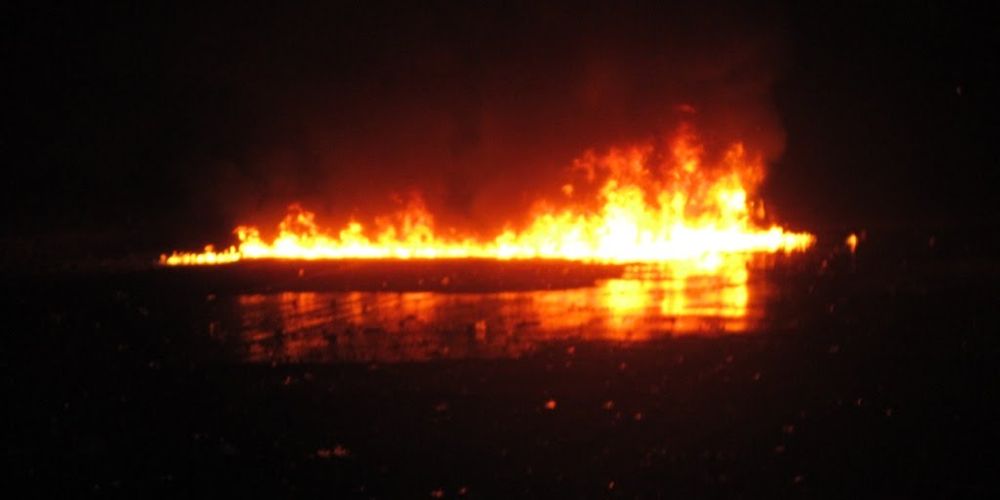 When the latest rounds of talks between the government and the Madhesi parties five days ago failed like many others, the protesting Madhesi parties decided to capture the Mahendra Highway (also called the East-West Highway) in addition to the key border transits. Their goal was to bring the buses and trucks escorted by the security forces to a halt. The police responded with deadly violence. Between the evening of November 21 and 22, they killed four protesters and left scores injured.

I live in Kanchanpur in Saptari district. On November 21 I left my house at six in the morning to meet the education minister, who was speaking to journalists in Bardibas, Mahottari. All along the way, the roads looked deserted. In Lahan, youth were burning tires on the street.

By 6 p.m. I was back in Saptari district. I met these four Dalit youth, each carrying a stick, on the road in Rupani. They belong to the Musahar community. The boy in the middle with the backpack is Ram Bilas Sada. He lives in Chinnamasta, a border village 30 kilometers away. He was carrying warm clothes for the night. The Madhesi parties had called on the villagers to occupy the streets and donate twenty rupees and a kilo of rice from each household, saying the protests would carry on for a long time. Their slogan was “rajmarg bharu”—fill the highway.

Ram Bilas told me that about 50 youth from his village had come to protest. Later that day two protesters would die, one of them a Dalit man.

Around eight, I saw a man welcoming the protesters arriving in tractors, announcing that this would be a decisive movement. Some others were cooking for the protesters. The cook said they were preparing food for about 3,000 people. Unlike in the outlying villages of the Madhes, Dalits and non-Dalits eat together in the streets. Here Dalits feel equal to all. The large number of Dalits in these protests did not surprise me at all.

By nine, I was back in my home in Kanchanpur, Saptari. I saw protesters stop an ambulance on its way to Janakpur. Instead of a patient, it was carrying 500 liters of petrol. The driver fled the scene as soon as the vehicle was stopped. The protesters wanted to burn the ambulance for smuggling petrol, but Anuj Yadav, a coordinator of the Morcha, stopped them. Yadav lived nearby. Several protesters became angry and threw rocks at Yadav’s house. In the end, the protesters seized the jerry cans, poured the petrol out on the street, and lit it. The cover photo shows the resulting blaze.

Around 10 p.m., the security forces tried to clear the roads by forcing the protesters off the road. The protesters responded to police laathis by throwing stones. Soon the police opened fire on the protesters in several locations in Saptari.

The mother of Nageswor Yadav holds the body of her dead son at the Gajendra Narayan Singh hospital in Rajbiraj, the district headquarters of Saptari, while Yadav’s brother looks on. Nageswor had come from a village 10 kilometers away to join the protest. The next day, police entered the hospital and assaulted the workers there.

Another protester, Birendra Ram, was killed in Bhardah.

A curfew was declared by the district administration at one the morning. In the morning, irate protesters burned a police post in Rupani. At around 10 a.m., police and protesters clashed once again. Clashes also occurred in Rajbiraj and other locations. By evening, two more had died from police bullets.

I was in Bhardah in the morning, and found some kids on the street collecting bullets. The black one is a rubber bullet, one said.

About a 10 kilometer stretch of the road between Kanchanpur and Bhardah is strewn with broken glass to prevent traffic from moving.

There were no protests in Barmajiya, but security forces caused significant damage around the village. They vandalized at least one paan pasal, street lights, the kitchens of small vendors, and assaulted several Madhesi civilians.

Angry protesters broke parts of a bridge in Barmijhiya, near the camp of Dantakali Battalion of the Armed Police Force. They thought I was a police spy and tried to seize my camera. Two trucks full of Armed Police arrived at the scene. After a brief confrontation, the protesters dispersed. Similar scenes were played out in Rupani where they burned a police post, and in Kanchanpur, Rajbiraj, and Bhardah, with tragic consequences. The protesters are undeterred and are assembling along Mahendra Highway in the thousands.