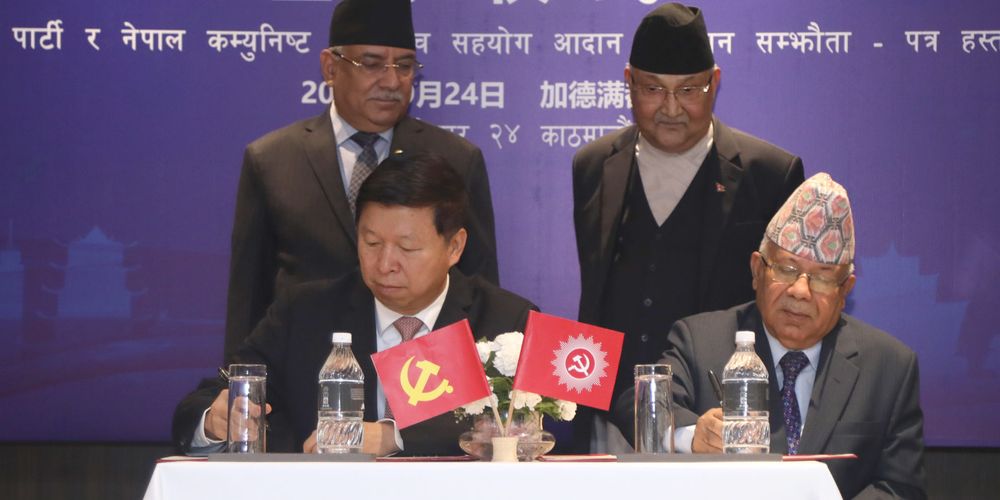 The Association of Private Medical and Dental Colleges of Nepal, a coalition of private medical schools, has threatened to stall the admission process for the forthcoming 2076/ 77 cohort of MBBS and MD students if the government continued its drive against the private medical education sector. In a statement issued on September 25, representatives of eleven medical schools accused the government of introducing regulations contravening the spirit of the Medical Education Bill in an attempt to shut down private medical education. The schools demand that the  government immediately set quotas for domestic and foreign students, and address fee structures and admission processes so they are in line with existing laws and regulations.

The warning comes at a time when medical students in private colleges across the country are intensifying their protest demanding that private medical colleges refund the extra fees they have been charging students in recent years. Last year, the government announced that medical schools could charge no more than Rs 3.85 million inside Kathmandu Valley and Rs 4.25 outside the Valley, for the five-year course. Students report that schools have been charging as much as Rs 5.5 million.

Student unions, civil society members, and rights groups have rallied behind the students, and are also demanding that the government act on the matter. It is widely believed that the authorities are reluctant to do so, because many of the medical colleges in question are owned by leaders of the ruling Nepal Communist Party (NCP), or those affiliated with it.

Dr. Govinda KC has said he will go on his 17th hunger strike if students’ demands are not met.

Co-chairman of the ruling Nepal Communist Party (NCP), Pushpa Kamal Dahal, said on September 22 that the government would soon release Rastriya Janata Party Nepal MP Resham Lal Chaudhary and others currently serving prison sentences for alleged involvement in the anti-constitution protests in Tikapur in August 2015, that resulted in the death of a child and police personnel, and was followed by targeted arson and violence against Tharu communities in the area. Speaking at an event in Sunsari, Dahal said the issue was already settled by the government, which had started the process to scrap what he called the false charges made against the Tharu men. There has been no official confirmation of Dahal’s claims.

Chaudhary and 10 others are currently serving life terms after they were convicted of lynching SP Laxman Neupane, six other security personnel and a child, weeks ahead of the promulgation of the new constitution. In recent weeks, Dahal has been vocal in his demands for the release of Tharu leaders currently in prison. Earlier this month, he called the Tikapur incident a “political uprising” of Tharu people.

Last month, the Socialist Party organized a massive rally in Tikapur to commemorate the incident and mobilize Tharu citizens, which may have prompted Dahal to also be vocal about the Tharu cause in order to gain political capital.

Hurry up and reconcile

Leaders from across party lines have reaffirmed their commitment to conclude the truth and reconciliation process in keeping  with internationally accepted laws and principles. Nepal Communist Party Co-Chair Pushpa Kamal Dahal, who spearheaded a decade-long Maoist rebellion before signing a peace deal with the other political parties and joining the political mainstream in 2006, said on September 26 that he was in favor of early settlement of conflict-era cases, regardless of any consequences he might have to face.

Dahal said that as the supreme commander of the Maoist People’s Liberation Army and a signatory to the peace process, he was ready to stand on trial and to take full responsibility for the so-called people’s war. However, he said, the war needed to be impartially, accounting for both its good and bad effects.

Dahal also said he believed the broader political leadership was more committed than ever to finally resolving the issue. Nepali Congress President Sher Bahadur Deuba and NCP senior leader Madhav Nepal also said that the parties were on the same page with regard to addressing victims’ concerns through the transitional justice mechanism. All were speaking at a gathering of stakeholders including conflict victims at a program organized by the National Human Rights Commission.

The Minister of Federal Affairs and General Administration, Lalbabu Pandit, on September 23 said the government was exploring ways to downsize what he called “a bloated bureaucracy” in order to optimize productivity and lower costs. Speaking at a program in Kathmandu, Minister Pandit said that the government was concerned about the  bureaucracy low productivity, relative to its high cost to the state. Pandit said the focus would be on ensuring the quality of personnel and that new legislation would pave the way for a complete overhaul of the existing set-up of the bureaucracy.

Pandit’s remarks are surprising, given that, across the country, the three tiers of government are struggling to deliver services due to a shortage of staff, among other reasons. By the government’s own account, 37,000 positions remain unstaffed at the federal, provincial and local levels.

The Nepali Congress (NC), the main opposition in the federal parliament and in six out of seven provinces, conducted a mass demonstration in Kathmandu on September 24 as part of its extended nationwide campaign against the government.

Hundreds of NC leaders and party workers marched through downtown Kathmandu displaying placards and party flags, and chanting slogans accusing the government of not doing enough to tackle corruption, inflation, and violence against women.

The NC, which has been vocal in its critique of the government for months has warned of further protests, if the government did not change its authoritarian working style.

On September 23, NC President Sher Bahadur Deuba accused the government of undermining established laws and promoting corruption by bypassing the competitive bidding process in the handover of mega-projects, in particular in awarding Melamchi Water Supply Project to the Chinese Sino Hydro Corporation Limited.

The ruling Nepal Communist Party (NCP) and the Communist Party of China (CPC) signed a six-point Memorandum of Understanding (MoU) on September 24 to strengthen mutual ties.

The accord, signed by NCP’s foreign affairs department chief, Madhav Kumar Nepal, and his Chinese counterpart Song Tao, commits to high-level visits between two parties, and sharing of experience and ideologies.

Song and his team reportedly gave a two-day orientation to NCP leaders on Xi Jinping Thought [on Socialism with Chinese Characteristics for a New Era], the ideology of the Chinese, who is expected to visit Nepal later this year. Information Minister Gokul Baskota confirmed the visit on September 26, but refused to divulge further details. The Nepali Congress has, unsurprisingly, criticized the accord.

Former Prime Minister Baburam Bhattarai has said that his Socialist Party would walk out of the government, in which it is a minority partner, if the ruling Nepal Communist Party did not move on amending the constitution. Bhattarai was referring to an accord signed between the then Federal Socialist Party-Nepal and the NCP, which proposed revisiting some terms of the constitution in exchange for the socialist party joining the government.

Bhattarai’s remarks come at a time when informal merger talks between the Socialist Party and the Rastriya Janata Party Nepal have stalled over the SP’s continuing to remain in government.

RJPN presidium member Rajendra Mahato told The Record that a merger would only be possible if the SP left the government.