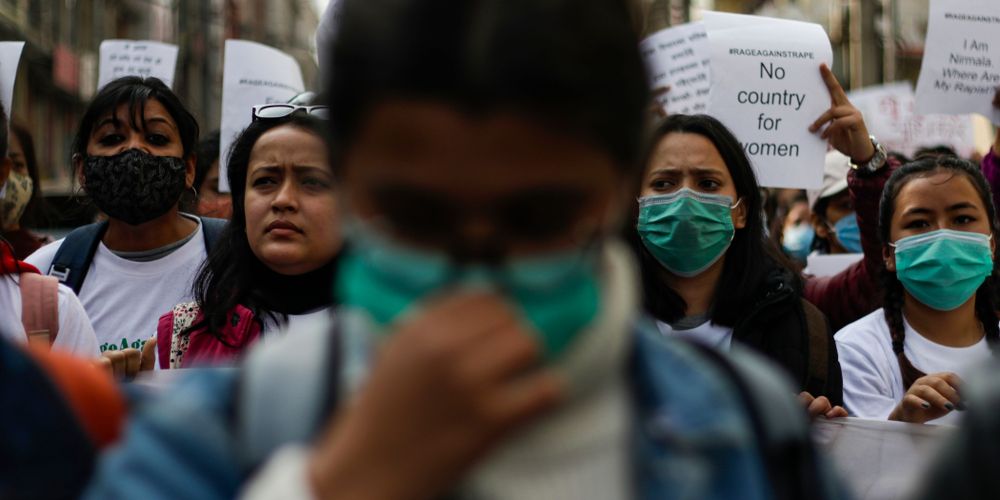 On February 21, almost a week after she received her first rape threat on social media, Sapana Sanjeevani was finally able to register a police complaint.

Sanjeevani, a poet and artist, had been receiving over dozens of messages threatening to rape and/or murder her over social media ever since her Maithili poem, ‘Hum ab Sita nahi banbau’, went viral. The poem, recited at the Women’s March in Kathmandu earlier this month, had received an overwhelming response from the largely Nepali-speaking crowd despite the language barrier.

Each line of the poem was a strong rebuke of a patriarchal society that holds women down by privileging qualities such as tolerance and meek submission, features often associated with various Hindu goddesses like Sita. The crowd’s reaction made the 31-year old artist realise she wasn’t alone in her anger and frustration at the way Nepali women were being treated in the country. Her emotions had coalesced in the wake of the 2018 rape and murder of teenager Nirmala Pant — whose case still remains unsolved — and reached breaking point with the rape and murder of 17-year-old Bhagrathi Bhatta, the perpetrator of which has been arrested, say police. While Pant inspired the poem, Bhatta provoked its public recitation.

Read more: ‘My vagina will vote you out!’

The public recital helped Sanjeevani achieve a sense of solidarity, but it also turned her into a target of abuse and trolling. A day after videos of her poem had started trending online, she received her first threat in the form of a voice message on Facebook.

The 30-second message in Maithili, sent by a person with an anonymous profile, is laced with profanities too extreme to repeat. The speaker, audibly incensed, threatenes to rape her if she doesn’t answer his calls, chides her for daring to speak ill about the Hindu religion, and warns her that he has shared her details with “his boys.”

“I panicked,” Sanjeevani said of the moment she first heard the message. “I had expected some negative feedback, but I had no idea that the reaction would be this extreme.”

She says she was particularly troubled by the fact that the person seemed to be familiar with her hometown. Since then she has received more than a dozen similar messages on various social media platforms. And she is not alone. Nearly all the women who spoke at the march, organized as part of the ‘Brihat Nagarik Andolan’ — a civil society network formed after the dissolution of the House by Prime Minister KP Sharma Oli — have been targeted with varying forms of online abuse, hate and threats.

Mohna Ansari, a former National Human Rights Commissioner, has seen her face plastered over posters labelled “anti-Hindu” and “a pseudo-feminist”. Hima Bista, one of the founders of the #RageAgainstRape campaign, has been told to go “sell her body” at Ratnapark because she used the word “vagina” in her speech. And then there are posts offering reward money to anyone who rubs blackpaint on the women’s faces.

Even those who have come out in support of the women have been targeted. Pallavi Payal, a friend of Sanjeevani who had shared a video of the poem on her Twitter account, instantly began receiving abusive messages calling her derogatory names and demanding that she delete the clip.

“I wasn’t even a speaker but they still came after me just because I expressed my support for Sapana,” said Payal, who runs the Instagram page Payal & Sapana Paints, which feature feminist Mithila artwork produced by the two friends.

A common theme among all the posts disparaging Sanjeevani and other participants of the Women’s March are sexual overtones, name-calling, and a warning of impending harm to their bodies. While men too face abuse online, when it comes to women, that harassment quickly descends into sexualised hate or threats, say researchers.

Rape threats and the threat of violence have been regularly deployed by men as tools to “silence women” and maintain “the hierarchy within patriarchy,” says feminist researcher Neeti Aryal Khanal, who sees the recent spate of abuse as a response from those who are increasingly finding themselves sidelined from discussions in offline and online spaces.

“They [men] have been used to soft, docile, disciplined women within their families, workspaces, and communities, and they have been regulating those voices through ideologies of the ‘good’ and ‘honourable’ woman,” Aryal said. “Their feeble arguments based on honour and propriety are being challenged academically, logically by women [like Sapana], using the power of knowledge. And this is discomforting to them.”

These attacks serve as a reminder of how online spaces remain toxic and unsafe for women and other minority groups. One UN research found that nearly 75 percent of women globally have been exposed to or have experienced some form of online violence. It’s no different in Nepal, where the majority of the complaints registered at the Nepal Police’s Cyber Bureau in the last few years have been related to harassment and abuse.

In the absence of specific laws to address online gender-based violence, getting authorities to take action often proves to be a challenge. After receiving dozens of abusive and threatening messages, Sanjeevani, the poet, decided to register a complaint at the Cyber Bureau. Those who accompanied her said the process was incredibly frustrating and discouraging.

“The police were not forthcoming with help and support, and we were made to feel uneasy and uncomfortable,” Hima Bista, who was with Sanjeevani when the latter visited the police station, said. “We had to wait for hours, were asked to get copies of one thing or another, and despite all that, the complaint wasn’t even registered that day.”

The police, according to Payal who also accompanied Sanjeevani to the Cyber Bureau, also initially refused to consider the threats as rape threats because the  words “rape” (balatkar, in Nepali) weren’t specifically used, despite the content presening a very clear and graphic description of the act. Payal says police officials also made Sanjeevani play the audio clip over and over again because they couldn’t understand the language it was in.

Both say that authorities need to start taking online abuse seriously as failure to do so will only embolden abusers and can easily translate into infliction of violence in non-virtual world. These forms of abuse can also lead to receivers experiencing mental toll and eventually opting for self-censorship or completely removing themselves from the online public space.

An official at the Cyber Bureau said an investigation into Sanjeevani’s case is ongoing, but it’ll likely take some time because of the need to work in coordination with social media companies that are all based overseas.

“We need to work with companies like Facebook in order to access data, and it takes time for them to get back to us, and at times they also refuse to share data due to privacy issues,” the official said, asking not to be named as he wasn’t authorised to speak on the matter.

As per the official, if all required documents (such as citizenship of the complainant, screenshots of messages, and links) are in place, then it shouldn’t take more than a day to get a complaint registered. But in Sanjeevani’s case, it took nearly a week, which is not uncommon.

In an article published last year, Human Rights Watch had noted the Nepal government’s failure to protect women from online abuse and had called for reform in law and police response to “address [the] rising tide of abuse.”

“The most important steps to tackle the deep gender inequality underpinning abuse are measures like comprehensive sexuality education and improving the status of women. Under international human rights law, Nepal has an obligation to protect the rights of women and girls — it’s time they took it seriously,” the international rights watchdog had said.

After multiple visits to the station, Sanjeevani was finally able to get her complaint registered on February 21, six days after she received her first threat.

“If we, being privileged women, can face such hurdles in order to get a complaint registered, one can only imagine the challenges others face to get their voices heard and for their complaints to be taken seriously,” said Bista.

Despite the ordeal she has undergone, Sanjeevani remains steadfast in her advocacy.

“It’s clear to me now that my words have shaken up many people. They want me to shut up, but I will only continue to speak up more,” she said.

Tsering D. Gurung  Tsering D Gurung is a writer and communications professional based in Kathmandu.

How going hungry affects children for their whole lives

Food poverty is on the rise in rich countries. And evidence suggests the impact can last for years afterwards.