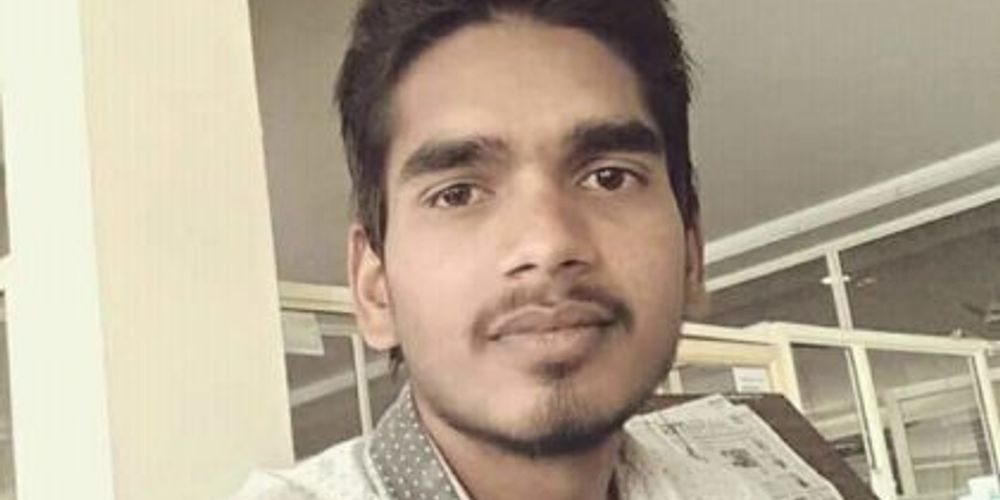 Om Prakash Mahato, alias Dilip, always believed his future lay in Sripur, a tiny village in Mithila municipality of Dhanusa district. He would often tell his friends and family about his plans to work from home after completing his studies.

“He had just given the final exam and had come home on a vacation,” said Ram Jiwan Mahato, his father. Dilip was studying B. Tech Mechanical Engineering at People’s College of Research and Technology in Bhopal, India.

On Friday, December 10, Dilip, 24, was crushed to death by a tipper truck driver in a coldblooded murder that has shocked Nepal.

Dhanusa District Police Chief Ramesh Kumar Basnet said Dilip was killed while he was trying to stop crusher operators from extracting sand and pebble from the Aurahi River which flows alongside their land.

“He was manhandled, stabbed in the right side of his stomach with an iron lever, his body was then laid on the river bed, and run over by a truck (number  Na 7 Kha 6413 ). We are further investigating the matter,” Basnet told the Record.

Police have arrested Bipin Kumar Yadav, a local businessman, and his friends in connection with the murder. Roshan, Dilip’s friend, had called him to the river at around 4 am. The family got a call from the ward chairman saying he’d been murdered around 15 minutes later.

A day before the murder, Bipin, the owner of the Churiyamai Sand Processing Factory, had threatened to kill Dilip if he did not stop creating obstacles in their business.

“He had threatened ‘to run tipper and mutilate my son’,” Ram Jiwan Mahato, the slain youth’s father, told the Record through phone.

Dilip together with other villagers had been campaigning to stop the illegal sand mining because it was damaging their farm by the river.

Laxmi Kumari Mahato, Dilip’s sister, told the Record that she also suspects hands of local politician and police in the murder. Police had taken Dilip’s body to conduct post mortem despite the objection of family members who were suspicious about their role. The police also didn’t immediately prepare a field report “Muchulaka”, a standard practice in suspicious deaths.

The “crusher” industry in the spotlight

Following Dilip’s murder, citizens and environmental activists across the country have demanded action against the culprit.

On the evening of January 11, dozens of people gathered at a vigil organized in Maitighar Mandala, offered candlelight in the deceased's memory and demanded justice for the victim.

Environmentalists claim the government’s failure to curb the looting of natural resources is empowering criminals.

"Those involved in illegal extraction business are either local goon or cadres of political parties. And, they are doing this under political protection and protection of state the apparatus like police and judiciary," said conservationist  Dev Kumar Tamang Moktan.

Moktan, who is also the General Secretary of Chure Water Resource Conservation Committee, said that the tendency of the courts to defer the hearing is giving way to a culture of impunity.

“Just yesterday, the appeal court deferred hearing on a case we filed against a municipality over illegal extraction.  They somehow manage to defer the hearing all the time. There should be a limit to it,” said Muktan.

Although the government tightened regulations for the operation of crusher industries and launched nationwide crackdown since 2014,  illegal sand mining has mushroomed with elections of local bodies, according to media reports.

It is mandatory for crushers to acquire permission from the Department of Small and Cottage Industries. But hundreds of crusher plants are operating without it.

Thanks to the boom in the construction sector and an increasing number of cement factories, there has been a sharp rise in demand for riverbed materials like sand, stone and pebble.

The extraction of natural resources remains the top revenue source for most of the municipalities. In addition, the sand extraction business is a popular source of income for local goons to businessmen to corrupt bureaucrats to politicians.

A tipper of sand (265 cubic feet) cost somewhere between NPR 25,000 to NPR 31,000 depending on its quality and the place you buy them. Smuggled sand fetches an even higher price in neighbouring Indian cities.

Everyone wants a piece of the pie. There is evidence that even the Nepal Army is capturing riverbed and running commercial crusher factories in some of its fortified barracks and selling sand and pebbles to local businesses.

Dinesh Kumar Yadav, an environmental activist who has worked in the formulation of a master plan for the conservation of Chure area of Siraha district, said that they are also not for a blanket ban on extraction. “ All we are telling is it should be done in a planned manner to avoid the risk of possible natural disaster,” said Yadav.

But these crusher industries are facing widespread public resistance due to its environmental impact. In November last year, around 15 people were severely injured in Udayapur when goons hired by crusher industries attacked around 1,500 locals protesting against illegal sand extraction in the district. Similar protests occurred in Dhading, Hetauda, Dang and Chitwan.

Illegal extraction remains a big problem even in some part of the Kathmandu valley, including Lalitpur. Authorities have failed to shut down crushers set up against law due to the backing of powerful politicians, and reporting on it comes with dangers. A journalist with Nagarik National Daily was manhandled by goons hired by a crusher factory while he was trying to report about the illegal extraction in Lalitpur in 2018.

The villagers, mainly farmers, were increasingly unhappy with the municipality and believed that the elected representatives were allowing the loot of resources for their personal benefits. On August 1, Dilip had shared a Facebook post  that blamed local politicians for pushing the village to the risk of natural disaster through illegal sand mining.

Sources said that Hari Narayan Mahato, the mayor, also owns several tippers and loaders, and has business interests in the extraction business.

The mayor could not be reached for comment, but Tara Kumari Basnet, the deputy mayor of Mithila Municipality, told the Record that the crusher factory in question was already in existence before the election of local bodies.

Three days after Dilip’s death, Province 2 government on January 13 announced to shut down the illegal crusher factories in the province. But experts are not convinced that the announcement will change anything.

“It has been a ritual to make such populist announcements whenever something bad happens, but such decisions hardly get implemented,” Yadav, the Chure activist, said.

In a village living under the “tipper terror”, Dilip spoke against injustice against his family and fought for others. He had taken up the issue of illegal extraction to the local media multiple times.

After repeated assurances from Dhanusa district police and local politicians, Ram Jiwan cremated Dilip’s body at the spot where he was killed in the presence of hundreds of villagers and his well-wishers on Sunday.

“I have been told that justice will be done. Let’s see if there's any justice left in this country,” said Ram Jiwan, adding that he wants to see Dilip’s killer behind bars.

Environmentalists say the government should not limit itself in punishing the culprits in Dilip’s loop case, but also start cracking down on illegal businesses. They say that the government’s immediate focus should be in shutting down crusher plants in Chure range and its periphery, where illegal extraction is pushing the entire lowland to the risk of floods, landslides, and other natural calamities.

Moktan said that every village in Province 2 shares Sripur’s story. The state mechanism, he said, itself is rigged in favour of the crusher operators and those with “muscle and power.”

“People like us working in conservation get threats all the time,” said Moktan.

The heart of the matter