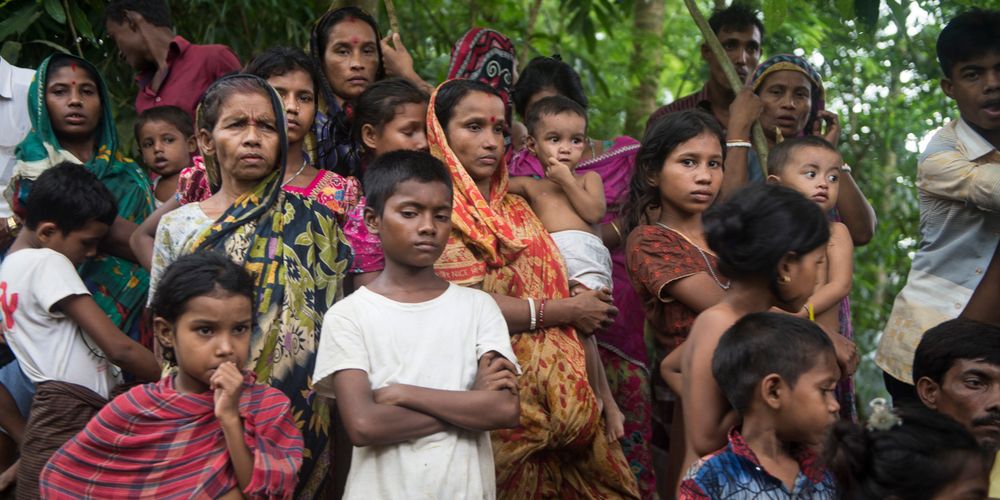 The small refugee camp in Southern Bangladesh which some 500 odd Hindu Rohingya refugees now call their home is a bit different from the ones inhabited by about half a million Muslim Rohingyas.

Unlike the countless makeshift bamboo and tarpaulin shelters erected on bald hills on the two sides of the Arakan Road that house the Muslim refugees, the one accommodating the Hindu Rohingyas is located inside a village dwelled by the local Bangladeshi Hindus. There, a chicken firm has been cleared out and converted into a large dorm like room for them. I had been in that Hindu refugee camp twice—once, in the last week of September, then later, the second week of October. The Hindu Rohingyas had taken refuge there from around the beginning of September.

In less than two months, the narratives reported from that camp by different media houses have differed greatly and the statements given to media by some of the Rohingya Hindus have created serious confusions.

During my September trip to the camp, I heard the Rohingya Hindus saying that they were being attacked by a group of men wearing black clothes and masks in their own villages in Myanmar. They stated that they could not see the faces of their assailants, and thus could not identify them.

The refugees I spoke to there included the much talked about ‘eight women’ who hailed from the Kha Maung Seik, also known as Fakirabazaar village, in Maungdaw district of Rakhine state. These eight women had already received much attention from different media houses by the time I went there to interview them.

I spoke to Anika Dhar, one of the eight, who told me that she couldn’t identify the black-masked attackers. Earlier, Dhaka Tribune reported that Anika along with seven other Hindu women, had fled to Bangladesh with their ‘Muslim neighbors’. Even before that, New Age in late August reported quoting her saying the Myanmar military and Buddhists killed her husband “for not participating in killing and ousting Rohingya Muslims”.

During the second week of October, when I went back to the same camp, I found Anika had already left Bangladesh and returned to Myanmar after the Myanmar government urged Hindu refugees who fled to Bangladesh to return, promising they would be cared for in Sittwe, the capital of Rakhine state from where the Rohingya refugees have fled. Neither was I able to find any of the other women from the group of eight. According to some unverified sources, about 20 odd Hindu refugees, including the eight women, had already gone to Myanmar.

The Guardian reported on October 12 that Anika, along with seven others, had been taken back to Myanmar. The article mentions that Anika initially claimed the Myanmar army killed her husband, but after she got back in Myanmar under the protection of the Myanmar military, she reportedly said that Rohingya Muslim militants killed her husband.

Much like Anika’s changing story, the statements that some of the other refugees gave me differed across the two visits I made to the camp. Shodashib Rudra, a Hindu refugee who had fled to Bangladesh from Thit Tone Nar Gwa Son village of Maungdaw with his wife and son, told me in September that the Rohingya Hindus had no problem with Rohingya Muslim. Then later in October, he told me “Rohingya Muslim insurgents were responsible for attack on their village.” Shodashib said the group of men wearing black masks who surrounded their villages was indeed “a group of Rohingya insurgents from Rohingya Arakan Salvation Army (ARSA) and those men asked them ‘to fight with the security forces of Myanmar’”. As the Hindu Rohingya refused to do so, “some of them were killed and the rest were forced to flee,” said Shodashib.

When asked why his life was spared, he did not have an answer.

Meanwhile, Sharala Bala, a mother of two who has remained in the camp despite the offering of a safe passage in Sittwe by the Myanmar government told me that she didn’t want to go back there. “My husband got killed by the masked men and I don’t know who they were. It’s hard for me trust anyone in Myanmar. I want to stay here in Bangladesh as long as possible.”

These contrasts and contradictions in the statements given by the Hindu Rohingyas refugees capture the sharp religious and ethnic divides of Myanmar that have only deepened since the violence in Rakhine. Exact statistics are difficult to pin-point as the Rohingya are not included in Myanmar’s official list of 135 acknowledged ethnicities, but Rohingya Hindus comprise only a small fraction of the predominantly Muslim Rohingya population.

A month after the start of the Burmese Army backed pogrom that has killed thousands and driven out half a million Rohingya from Myanmar, officials there displayed 45 bodies from what they claimed was a mass grave of Rohingya Hindus killed by Muslim insurgents. Indian Premier Narendra Modi had made a two-day visit to Myanmar on September 5, and then in late September, the Myanmar government offered safe passage for Rohingya Hindus in Sittwe. It is against this backdrop that Rohingya Hindus have been giving changing, conflicting statements about who their attackers in Myanmar were. These signs point to the colonial inspired political tactic prevalent in South Asia: the Hindu-Muslim feud.

Even though religious faith was never the main faultline between Muslim and Hindu Rohingyas in the Arakan region for centuries, the Myanmar government, in its bid to corner and eventually oust the Rohingyas from the region, has apparently played the ‘Hindu-Muslim’ card  to create a division between these two religious sects of this ethnic group.

The Myanmar government has issued the Hindu Rohingyas a green card citizenship which allows them to travel freely and give them access to higher education, better business opportunities and passports to travel abroad.  Whereas the Muslim Rohingyas are given a red citizenship card which confines their movement only inside the Arakan state. Such imposed and purportedly intentional discrimination by the Myanmar government has apparently worked, because I observed that Muslim Rohingya refugees in different camps inside Bangladesh had started mistrusting the Rohingya Hindus. This suspicion about the Hindu neighbors among the Muslim refugees intensified after the Myanmar authorities’ announcement about the mass grave of Hindu Rohingya. Their announcement could not be independently verified, since this took place in a region where access has been tightly controlled by Myanmar's army. The Arakan Rohingya Salvation Army (ARSA) however has categorically denied killing the Hindus, stating that they do not kill civilians.

Julhas, another Muslim Rohingya from Kutupalong said, Hindu Rohingyas have earned the favor of Myanmar Government. “The government [of Myanmar] has promised them safe zone in Sittwe while it ousted us from our own motherland.”

The Dhaka Tribune, quoted one Abdus Salam from Kutupalong camp who told the paper, “The relation between Hindus and Muslims has significantly deteriorated over a month.” In the same paper, Mohammad Ayes, an enrolled member of ARSA, said, “The army is playing a game. The Buddhists and government agents attacked the Hindu villages so that they can justify the military crackdown targeted on Muslim eradication.”

Reuters also spoke with an ARSA member named Abdullah who dismissed the accusation saying Buddhist nationalists had staged it “to divide Hindus and Muslims.” He told the news agency that ARSA has internationally pledged not to target civilians and that remains unchanged.

Dr Delwar Hossain, Professor of the Department of International Relation (IR) of Dhaka University (DU), told me that figuring out why the Myanmar Government would want to drag Myanmar’s Hindu minority into a crisis that involves Buddhists and Muslims does not require much imagination.“If one is aware of the historical context of the sub-continent, then they would realize that the classic strategy of ‘divide and rule’ has always worked here. The Myanmar authorities seem to have gone to great lengths to divide the Rohingya Hindu from the Rohingya Muslims in their media management strategy and I would say they have succeeded there.”

Prof Delwar said Myanmar knows the importance of having India as its ally and it knows that if a narrative like ‘Muslim Rohingya insurgents killed Rohingya Hindus’ can be established, then it would not only garner them a Modi-led India’s support but also would help them convince the outside world that their clampdown on Muslim Rohingya was a timely and justified one.

He observed: “I believe the Rohingya Hindus are used here like pawns. Unfortunately, they don’t have much choice but to be the puppets of Myanmar government.”

Faisal Mahmud  Faisal Mahmud has over seven years of reporting experience for three national English dailies in Bangladesh. He currently works for Bangladesh Post as Senior Correspondent. As a trained engineer who has completed his bachelors in Computer Science and Engineering, Faisal specializes in reporting and writing on telecommunication, financial technology and renewable energy. Faisal also has a keen interest in human interest stories and writes in-depth reports on several social issues. He is currently pursuing his MA in Journalism at Ateneo De Manila University (ADMU) in Philippines under the ACFJ Fellowship.