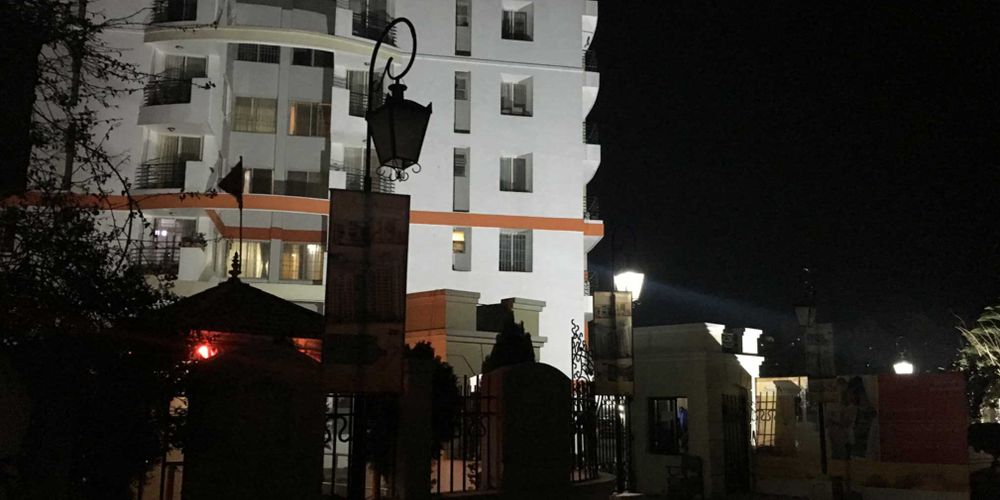 “Tyei ho! Tyei ho! (That’s it! That’s it!)” gasps the resident, as a man and a woman walk into view on the CCTV viewing monitor. He and his fellow residents are gathered in the community room of Sunrise Apartments (featured image above), a high rise residential complex in Nakkhu, Lalitpur, to review footage from the previous night. The video on screen is paused, rewinded, and played back. There is a stunned silence as the residents watch.

The video is evidence that at 10:24 pm on March 17, 2018, Nirajan Maharjan, 33, a tenant at the apartment complex, assaulted a 19 year old woman hired to be his family’s domestic help.

The police, however, are not pressing charges, and neither is the victim.

The man seen assaulting, Nirajan Maharjan, owned two apartments, one of which was in Sunrise. The young woman, Nirajan, and his two friends had come to Sunrise Apartments at around 10:20 pm on March 17. Nirajan’s wife was visiting her parent’s home at the time. While Nirajan’s friends stayed behind to park their vehicle, Nirajan and the woman walked to the elevator, at 10:24 pm, where he began assaulting her. When the elevator reached their floor, the woman escaped and began shouting. This alerted the neighbors, who witnessed Nirajan pursuing her and assaulting her again. Residents called the police, and a group of policemen arrived. However, Nirajan and his friends then left. The residents were unhappy about how they were let go, and contacted higher ranking police. It was after Inspector Rupa Labung, a female officer, arrived on scene that Nirajan, his friends, the victim and Nirajan’s wife were brought to the Nakkhu Police Station around midnight.

Nirajan was let go from detention the next afternoon after he and the victim signed an agreement, in which Nirajan states that he will not repeat his actions. The young woman, Nirajan and his wife returned home together.

Inspector Labung said, “The victim has stated that Nirajan struck her because she had arrived home late and he was drunk. She does not wish to press charges. Since both persons live together, this counts as a domestic violence case, and there is a 30 day mediation period to allow the parties to reconcile.”

The incident has attracted attention from the highest level. Sunrise resident Lhamo Sherpa has stated that after she posted the incident on social media, she received a call from the Prime Minister’s office on March 19,  inquiring about the case.

Mahendra Gurung, Secretary, Office of the Prime Minister and the Council of Ministers, said, “This is a public interest case and we had reached out to AIG Jaya Bahadur Chand and SSP Ganesh Bahadur Air asking them to look into the case.”

It took the police four days to collect the security camera footage. Residents had informed the police that such footage existed the day of the assault itself.

Then on March 26, the police sent a letter to Sunrise residents, asking them to sign it. In the letter, the police underplay the incident and also falsify the relationship between the perpetrator and victim as "brother and sister".

When reached for comment, Nirajan Maharjan trivialized the incident by calling it a minor scuffle. He did not respond to further questions.

According to Nepal Police Crime Investigation Department, there were 11,629 reported domestic violence cases in the fiscal year 2016-17. Reconciliation occurred in 59 percent of the cases and another 29 percent are under reconciliation. Only 17 cases went to court.

The cases registered with the police represent a miniscule fraction of the actual cases. In the National Demographic Health Survey 2016 22 percent of Nepali women aged 15-49 surveyed had experienced physical violence of some kind, with a prevalence of 6 percent among unmarried women, 25 percent among married women, and 46 percent among divorced, separated or widowed women. Surveys on violence against women also consistently show persons known to the victims to be the perpetrators.

Low reporting can be attributed to power imbalances between victim and perpetrator. Victims are often economically dependent on the same individuals who assault them. There is also no provision in the law to support victims financially while they fight their case. Challenging the perpetrator could also mean disrupting social relations with in-laws and other relatives, and victims are often unable to do so because of the absence of empathy and support in their social circles.

Punishments exist for other offenses such as drunk driving. Offenders must pay a fine and attend mandatory awareness classes. For domestic violence, the law emphasizes mediation over punishment for the perpetrator, and often, as in the Sunrise case, this does not include counseling, anger management or training on issues of gender based violence. An agreement alone does not guarantee future safety for the victim.

The Sunrise case is symptomatic of wider problems. Delays in collecting evidence, trivializing of the incident, legal issues, lack of support provisions for victims, victim-perpetrator power imbalances and lack of repercussions for the perpetrator mean that victims do not get justice in domestic violence cases. Even in the heart of a financially affluent society, even with interest from the PM office, and even with video evidence of the assault, the victim is unwilling to come forward, and the case is concluded with an agreement. As such, physical violence against women in Nepal remains widespread and few perpetrators pay the price for their crime.

The hunt for Nirmala Panta's killer

The rape and murder of a young girl stuns Nepal