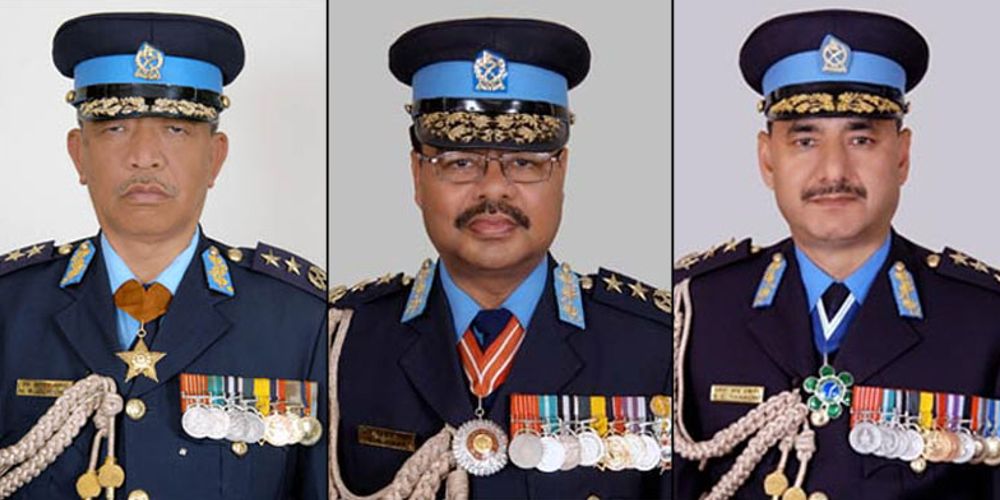 Three former Inspectors General of Police (IGPs) convicted of corruption in the high profile “Sudan scam” have not been arrested although a month and half has passed since the Supreme Court gave its verdict. The government continues to deploy police personnel as security guards and domestic help in their households.

On April 30, the Supreme Court sentenced Om Bikram Rana, Hem Bahadur Gurung, and Ramesh Chand Thakuri to jail. The dramatic verdict came just a few hours before the ruling coalition of Nepali Congress and Communist Party of Nepal (Maoist Center) registered an impeachment motion at the parliament against Chief Justice Sushila Karki, thereby barring her from further work at the Court. A joint bench of Karki and Bishwambar Shrestha sentenced Rana to two years in jail. Gurung and Thakuri were each handed jail terms of one year.

The case, which took six years to conclude, was frequently criticized by legal experts for absolving former ministers and senior bureaucrats at the Ministry of Home Affairs when the corruption took place of any involvement.

The three former IGPs were convicted of embezzling millions of rupees allotted for buying equipment for Nepali peacekeepers working with the UN Mission in Darfur, Sudan. In 2007, the Nepal government allocated NPR 450 million toward the purchase of armored personnel carriers and other equipment for the peacekeepers, which the UN Mission was to reimburse later. The police chiefs were accused of embezzling NPR 280 million by procuring ramshackle, World War II-era carriers from the Czech Republic.

A senior official at the Police Headquarters confirmed that the former IGPs are continuing to receive state facilities and security personnel. Two constables and two police personnel are being deployed to provide security to former IGP Rana, who was convicted of initiating a “faulty procurement” deal to buy the carriers and other logistics for the peacekeepers.

Former police head Hem Bahadur Gurung enjoys a security detail of three personnel—an assistant sub-inspector of police (ASI), a constable, and an officer—and a helper from the Police Headquarters. Like his predecessors, former IGP Thakuri also gets security guards from the Police Headquarters: an ASI, two police personnel, and a helper are serving their convicted former boss.

Thakuri received a jail term and fine for his decision to release money to Micheal Rider of Assured Risks, a London-based supplier, despite knowing that the personnel carriers were outdated.

Nepal Police claimed that the Supreme Court is yet to “officially inform” the law enforcement agency about its verdict.

“Once the SC notifies us about its decision, the security details will be recalled. In fact, there would be no need for any security personnel as they will be in heavily guarded prisons,” said a senior police official.

Hari Raj Karki, Director General of Judgment Execution under the Supreme Court, blamed the delay in preparing the full text of the verdict for the lack of progress in executing the verdict.

However, anti-corruption experts blame the court administration and the government for the delay in producing the full text of serious cases related to corruption and rights violations.

“It’s a state of anarchy. The government itself seems to be protecting individuals convicted of corruption. Bureaucratic hurdles at the court should have been resolved instantly while dealing with serious cases related to corruption,” said Shree Hari Aryal, president of the Transparency International-Nepal.

In previous cases, high profile individuals convicted of corruption were taken to jail after they surrendered even though the court administration had not produced the full text of verdicts on their cases. For example, JP Gupta, former Minister of Information, along with Nepali Congress leaders Khum Bahadur Khadka and Chirajnjivi Wagle, surrendered before the court following its verdict.