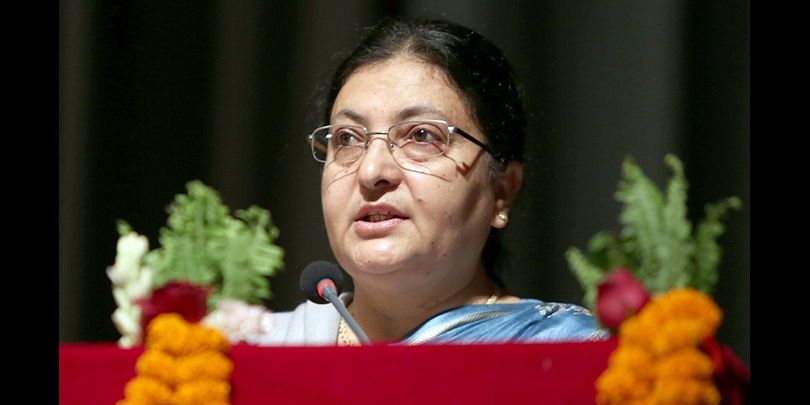 On Monday, a day before the scheduled constitutional council (CC) meeting, Prime Minister KP Sharma Oli held an hours-long meeting with President Bidya Devi Bhandari. The meeting of the CC, the body responsible for recommending members to constitutional bodies, was scheduled for Tuesday, but no one was sure whether its members--mainly, Speaker Agni Prasad Sapkota--would attend it. Sapkota’s absence would mean that those gathered would not be able to make headway in recommending members for 45 positions in 11 constitutional bodies. The law clearly states that for any decision to be taken, the council requires the presence of the Speaker and the main opposition leader in the six-member board.

The position of Deputy Speaker has been lying vacant for months. The Prime Minister, as the head of the CC, and the chief justice and the chairman of the National Assembly were already at the meeting, but the other members-- opposition leader Sher Bahadur Deuba and the Speaker-- have for a long time been reluctant to attend CC meetings. That’s because they have reservations regarding Oli’s arbitrary working style.

Furthermore, as predicted, owing to the deepening internal feud with the Nepal Communist Party (NCP), Speaker Sapkota, from Oli’s own party, the NCP, did not attend the meeting, even though the opposition leader, Sher Bahadur Deuba, made himself available for the meeting. Having failed to make recommendations for appointees, Oli deferred the meeting for 5 pm of the same day. Instead of waiting for the next round of meeting, scheduled later in the evening, Oli forwarded a Constitutional Council Ordinance (first amendment) to President Bidya Devi Bhandari, who could approve his recommendations for members of constitutional bodies--on the grounds that the majority of CC members had attended the meeting. President Bhandari promptly authenticated the ordinance within a few minutes of its being forwarded to Sheetal Niwas, the president’s residence.

Ordinances are authoritative decrees brought into effect through a fast-track process, bypassing regular procedures, but usually implemented under extraordinary circumstances, and usually as a last resort. It is a political instrument that is often exploited by the executive head in a country where there is little regard for the rule of the law and the principle of check and balance.

In this case, in Nepal, the top leaders, including those from the ruling party, civil society members and the media came to know about the provision only when a press statement was issued from the President’s Office. It immediately created controversy because the president had chosen to issue it at a time when her focus should have been on summoning the winter session of Parliament, which has been postponed for nine months.

As always, President Bhandari did not think it necessary to consult opposition leaders and civil society and legal experts, as is the norm before such a bold step is taken. And Oli was widely criticised for his abrupt move to introduce the ordinance. Besides the general public and the opposition, almost all ruling leaders came down heavily against Oli’s move. They demanded that he immediately scrap the ordinance. But neither Oli nor the president were willing to backtrack on their moves.

The next day, NCP leaders Bhim Rawal and Pampha Bhusal rushed to Sheetal Niwas to register an application demanding that the ordinance be scrapped. Altogether, 83 ruling lawmakers put their signatures on the paper requesting that President Bhandari call a special session of parliament to discuss the ordinance. Rawal and Bhusal had rushed to the head of the state to register the application on behalf of lawmakers. They, however, were neither allowed to register the application nor did they get a chance to meet the head of the state, despite spending hours at her office premises. Many have interpreted that chilly reception as a sign of President Bhandari’s arrogance and regard it as blatantly dismissive of the wishes of the elected people’s representatives.

While the leader duo were still waiting at Sheetal Niwas, hoping to meet the president, the top ruling-party leaders assembled at the prime minister’s residence, in Baluwatar, pressed Oli to amend his undemocratic move. Cornered in the party, Oli finally agreed to rescind the ordinance.

Today, many think the president would have at least earned some respect as head of state if she had put such a controversial ordinance on hold for a few days and sought clarification from the government. As the head of the state,  she could easily have done that. But she didn’t even give the ordinance a second thought as she had already reached the conclusion of issuing it during her meeting with the prime minister. Instead, she authenticated it, before it was withdrawn in less than a day--which speaks volumes about her political acumen.

Her handling of the ordinance does not come as a surprise. President Bhandari is known for  never taking even a momentary pause before endorsing ordinances forwarded by PM Oli. On Monday, the president once again endorsed the same ordinance that had been forwarded to her in April and was withdrawn after it was met with widespread criticism across the political spectrum. In April, PM Oli had her endorse two objectionable ordinances: one related to political parties and the other to the Constitutional Council. Back then too, the President’s Office had passed the ordinances swiftly.

Oli had forwarded those ordinances in a similar context--when he was in the minority in his party’s meetings. Today, Oli seems exceedingly worried about being cornered in his party and getting stripped of his posts. To assuage his fears, he keeps bringing ordinances, even when they are not needed at all. Essentially, Oli does this solely to maintain his grip on power. He has been successful in all his disingenuous machinations owing to the support of an unabashedly partisan president.

Apart from her biased approach, the president has also been accused of unnecessarily jumping into the party's internal row--to prop up prime minister Oli--completely forgetting her role as the guardian of the Nepali people and the Constitution. She has revealed these inclinations time and again. The recent ordinance saga is just a reminder of how she operates.

President Bhandari shot to power with Oli’s support. When she became president, many Nepalis celebrated her achievement, even as some pointed out her questionable qualification for the post of the head of state. Questions were raised by women’s rights groups over the part she played in promulgating an anti-women citizenship provision, but that was dismissed because the provision at least promised to better the plight of women. In actuality, Bhandari believes, for example, that Nepalis women are not entitled to pass on citizenship to their spouse, like men are, and that they should not be allowed to pass on citizenship to their children. In other words, she believes women should not get equal status and the same entitlements that Nepali men enjoy.

Beyond the issue of citizenship, it was due to her intervention that the Passport Act included a constitutional provision that allows the government the power to suspend, revoke, or deny passports to a citizen. As per the provision, the president can send back a bill to the state assembly if he/she thinks it needs further deliberation. However, it is not within the jurisdiction of the president to suggest an amendment to bills.

During the latest episode of Oli’s shenanigans to do with ordinances, the president endorsed the ordinances so swiftly that even the Cabinet did not have a chance to look at it. This is not a time of crisis nor a state of emergency that an ordinance must be passed. This is a time when the prime minister has been refraining from calling the parliament to session. And yet, the president did not feel there was a need to ask the reasons for bringing the ordinance.

It is surprising that the president seems to be oblivious of how her behaviour in office is perceived by the public. President Bhandari has long been the butt of jokes for her penchant for luxury and for her pompous manner. She seems to have no clue about the cognitive dissonance created by how she behaves and her belonging to a party that advocates for the upliftment of the poor-- hers is supposed to be the party of the ‘proletariats’. And yet, she continues to exhibit her hankering for a royal lifestyle. From her motorcade to her decorating her office room, her manner and action all exhibit an unmitigated desire for special treatment.

The president already has two sets of motorcades, and yet she sought an additional NRs 160 million to purchase new bulletproof cars, and an additional NRs 1.5 billion to purchase a helicopter. The President’s Office already sprawls across a 160 ropani (20 acre) parcel of land, but it has acquired additional land--by forcing the Nepal Police Academy to shift. As the country was reeling under Covid-19 crisis, the president renovated her office, for which NRs 20 million was spent just on carpets. Her foreign visits are also costly. For instance, NRs 13 million was spent for her Qatar visit, a trip that was apparently lobbied for by the President’s Office itself. During that trip, she was accompanied by 10 government officials and 27 others. In 2018, she led a delegation of dozens of ministers and officials to the 24th UN Climate Change Conference (COP24), where she embarrassed herself with her speech, in which she claimed that the Himalayan range and high mountains contributed to keeping the air and water cool, refreshing, and pure. The expenses incurred in that junket have not been made public.

The president is supposed to provide the check and balance should a prime minister overreach his bounds or should the other organs of state fail to uphold the tenets of democracy. But with Nepal’s prime minister and president working hand in glove, Nepal’s democracy is being shredded--one ordinance at a time.