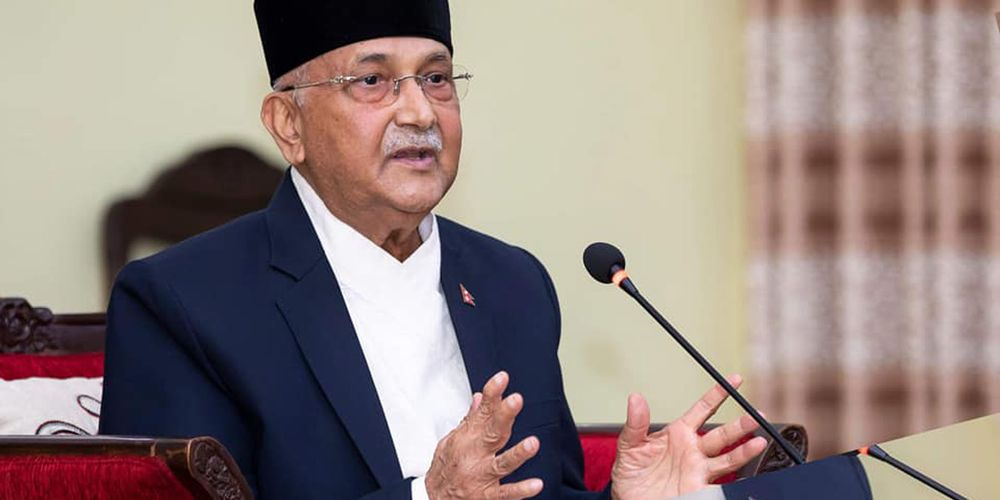 Just hours after the House of Representatives was dissolved on December 20, a-year-and-a-half before the expiration of its mandated five-year term, Prime Minister KP Sharma Oli summoned election commissioners to his residence in Baluwatar. In the presence of Home Minister Ram Bahadur Thapa and Finance Minister Bishnu Poudel, Oli instructed the election commissioners to begin preparations for the holding of general elections in April-May.

According to Election Commissioner Ishwari Prasad Paudyal, who was present at the Baluwatar meeting, the prime minister said he wished to hold the election in two phases, on April 30 and May 10, at any cost. Both Home Minister Thapa, who is responsible for arranging security, and Finance Minister Poudel, who is responsible for funding, assured Oli that they would do their best to hold elections in the spring, according to Paudyal.

“The government has announced elections, so we are prepared to make them possible,” said Paudyal. “Being an election body, we cannot say that elections won’t take place. As an election commissioner, I would say that it is our constitutional responsibility.”

But, will the election really happen as planned? And if they do, what kind of elections will they be?

Many, including former and current election commissioners, are not convinced that polls will take place in the coming spring. There are numerous political, financial, logistical, and temporal constraints that first need to be resolved before the prospect of spring elections even becomes likely.

A number of former and sitting commissioners who spoke to The Record say that things will become clearer once the Supreme Court, where over a dozen writ petitions filed by advocates, including one registered by rival party leaders from the Nepal Communist Party, await hearings. Most of the petitions demand that the planned poll be scrapped, arguing the Constitution doesn’t allow the prime minister to dissolve Parliament and go for fresh elections before the completion of a fixed five-year term. With just over a 100 days remaining for the planned election date, a date for the hearings has yet to be scheduled.

If the apex court invalidates Oli’s dissolution of Parliament, a new set of state power equations will evolve and necessitate the election of a new government leader and head of state through the reinstated House of Representatives.

Pro-Oli lawyers, however, have been arguing that the prime minister can call for fresh elections whenever he feels “uncomfortable” running the government, as per the people’s mandate expressed in the last elections.

“All eyes are on the court,” said Paudyal. “If the court decides in favour of elections, there will be no option but to hold them.”

Nepal’s Supreme Court, however, has an inconstant position whenever it comes to cases involving dissolution of the House. While the court has sometimes upheld the prime minister’s powers to dissolve the House and go for elections, at other times, it has nullified the executive’s decision.

For instance, in 1994, then prime minister Girija Prasad Koirala dissolved Parliament after his government’s annual plans and policies were rejected by the Parliament. Koirala’s move was endorsed by then Chief Justice Bishwonath Upadhyaya. But under the same Constitution, the very same chief justice annulled Man Mohan Adhikari’s dissolution of Parliament almost a year later in 1995.

Those decisions, however, were made under a Constitution that allowed the prime minister to dissolve the House. The present 2015 Constitution does not provide the chief executive that right. President Bidya Devi Bhandari cited Articles 76 (1), (7) and Articles 85 while approving Oli’s December 20 decision, but legal experts believe that those articles only apply in the case of a hung Parliament.

Besides these thorny political and constitutional questions, there is also the issue of financing and logistics. As elections weren't envisioned while announcing the annual federal budget for the current fiscal year, the government lacks the funds to conduct general elections across the nation. Election officials say that expenses will be in the billions, with most of the money diverted from the development budget. At a time when the country is still in midst of the Covid-19 pandemic, many fear that crucial funds from prevention and care programmes could be cut. Oli has already refused a plan to provide free PCR (polymerase chain reaction) tests for all suspected coronavirus patients, citing lack of funds.

Logistically, Nepal’s Election Commission has a history of being able to hold elections at short notice. In 2017, the Election Commission managed to hold general elections in 84 days. However, the validity of those polls has sometimes been suspect. All the major political parties had boycotted the municipal polls held in 2006 under the regime of King Gyanendra. That election -- conducted by chief commissioner Keshav Raj Rajbhandari, who had been appointed to the position by the king -- was later invalidated.

The sitting election chief, Dinesh Thapaliya, who was also appointed by Oli, may face a similar situation if he fails to bring other stakeholders, mainly major political parties, on board the election process.

But the Election Commission still faces the arduous task of deciding on the official names and election symbols for the two warring factions of the ruling Nepal Communist Party. Both the Oli and Pushpa Kamal Dahal factions have laid claim to the current name and symbol of the party, each arguing that they are the ‘official’ party. The party statute states that signatures from both the party chairs -- Oli and Dahal are both party chairs -- validate party decisions, but the duo has issued conflicting statements. While Dahal has expelled Oli from the party, Oli has in turn formed an 1,199-member general convention organising committee.

Party insiders say that poll prospects will not become certain until the Election Commission settles the row by registering one faction as the official party and awarding it the election symbol. But based on past experience, former election commissioners say it could take at least a month-and-a-half to study the problem and make a decision.

“Even if the court delivers a verdict and the election body settles the ruling-party dispute in time, all the major political parties will need to come together and agree to go to elections,” said former election chief Uprety.

If all the other political parties boycott the polls, Oli could be looking at a fate similar to that which befell King Gyanendra. Any government elected in the face of a wholesale boycott would be deemed invalid.

Oli, however, has been relentlessly pushing for early elections. In the first week of January, he held a series of briefings with diplomatic missions and the international community, speaking about the rationale behind his dissolution of Parliament. The government has even published a booklet in English that consists of translations of his addresses to the nation, his public statements, and official replies to his opponents in the party.

Still others believe that Oli himself will backtrack from his election plans and agree to form a new election government, similar to the government led by Chief Justice Khil Raj Regmi ahead of 2013’s second Constituent Assembly elections. Oli has found himself in a tight spot, being squeezed all the way from the federal to the local levels by party rivals Dahal and Madhav Kumar Nepal. And there is speculation that the Supreme Court might agree to a caretaker government, hoping to replicate 2013.

Read also: How govt officials are looting the Covid coffers

As it stands, elections in the spring look increasingly unlikely, given the series of decisions that will have to fall in Oli’s favour. And even if elections are held, serious questions will surely be raised over its validity, as a large section of the polity will likely reject the polls.

“We are prepared for elections but it’s up to the parties to participate or not. If they don’t participate, they can choose to refuse to accept the results,” said Election Commissioner Paudyal. “But as a constitutional body, we will not compromise in any way on holding elections in a free, fair, and transparent manner.”

After Years of Media Trial, a Stunning Verdict in the Tikapur Case